“I was always more careful of money than of God, and served the creature rather than the Creator.” Peter Waldo (d. 1218) Wanted a Purer Christianity.

Anonymous Chronicle written about 1218. Translated by J. H. Robinson in Readings in European History, 1905. Adapted, modernized, introduced, and prepared for the web by Dan Graves. 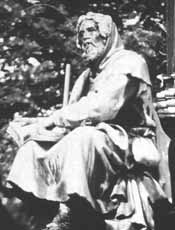 We do not even know for sure that Peter Waldo’s first name was Peter; he was a rich merchant of Lyon France, who, while listening to a troubadour, came under deep conviction for sin in the latter part of the 12th—century. Troubadours (who had become popular in the 11th century) often sang ballads about saints. This particular troubadour recounted the story of Alexis, a fifth century mystic who abandoned wealth to live by begging and returned home unrecognized.

The story touched Waldo, who immediately sought the surest path to heaven, which he saw in Christ’s words to the rich young ruler, “Go sell all you have, give to the poor, and come, take up your cross and follow me.”

As he gained spiritual maturity, Waldo began to preach and teach in the streets. Followers gathered around him. These were known by many names, such as the Poor Men of Lyon, The Poor of God, Waldensians, or Waldenses.

At some point Waldo commissioned a scholar to translate parts of the New Testament into Provençal, the local language. Lay preachers carried this word from place to place. Later, Waldensian peddlars also spread the gospel.

Bishops became upset that Waldo and his followers were encroaching upon their turf and doing the tasks they had left undone. In 1179, to counter their objections, Waldo and a disciple went to Rome to seek papal approval for their work. Pope Alexander III had them explain their position to a panel of three clergymen. No one seems to have taken them seriously and the pope did not approve their work, although he seems to have authorized them to preach wherever local bishops approved. This, of course, was to say nowhere. Shortly afterward, the Third Lateran Council condemned Waldensian teaching, but without excommunicating them.

Driven from Lyon, the Waldensians settled in the high valleys of Piedmont, and in the Luberon region of France. In 1184, Pope Lucius III excommunicated Waldo, and in 1215 the Fourth Lateran Council agreed.

For three centuries, Rome persecuted the Waldensians savagely. Driven from place to place, they clung to Scripture, and their lay preachers continued to spread reform views, which were far from heretical and in agreement with much that would later be found in the Franciscan movement and in Protestantism. Indeed, most Waldensians united with Protestants during the Reformation. Those who remained in the Alps, however, retained their separate identity. Italy finally awarded the Waldensians religious freedom in 1858.

The account that follows was written around 1218, the year in which Waldo is thought to have died. It tells of his conversion in typical Medieval terms.

And during the same year, that is the 1173rd since our Lord’s Incarnation, there lived at Lyons in France a certain citizen, Waldo by name, who had made much money by wickedly charging exorbitant interest rates. One Sunday, when he joined a crowd which had gathered around a troubadour, he was struck by the singer’s words and, taking him to his house, he took care to listen to him at length. The passage he was reciting concerned the holy Alexis, who died a blessed death in his father’s house.

When morning came the prudent citizen hurried to the schools of theology to seek counsel for his soul; but when he was shown many different ways of going to God, he asked a master which way was more certain and more perfect than all others. The master answered him with this text: “If you would be perfect, go and sell all that you have,” etc [Luke 18]

Then Waldo went to his wife and gave her the choice of keeping his personal items and funds or his real estate, which consisted of ponds, groves and fields, houses, rents, vineyards, mills, and fishing rights. She was angry at having to make this choice, but she kept the real estate. From his personal items and funds he made restitution to those whom he had cheated; a great part of it he gave to his little daughters, who, without their mother’s knowledge, he placed in the convent of Font Evrard; but the greatest part of his money he spent for the poor. A severe famine was then oppressing France and Germany. The prudent citizen, Waldo, gave bread, with vegetables and meat to every one who came to him for three days in every week from Pentecost [May 28th that year] to the feast of St. Peter’s bonds [August 1st].

At the Assumption of the blessed Virgin, [August 15th] throwing some money among the village poor, he cried, “No man can serve two masters, God and mammon.” [Matthew 6:24] Then his fellow—citizens ran up, thinking he had lost his mind. But going on to a higher place, he said. “My fellow—citizens and friends, I not not insane, as you think, but I am avenging myself on my enemies, who made me a slave, so that I was always more careful of money than of God, and served the creature rather than the Creator. I know that many will blame me that I act thus openly. But I do it both for myself and for you; for myself, so that anyone who sees me from now on having any money may say that I am mad, and for you, that you may learn to put hope in God and not in riches.”

The next day, coming from church, he asked a in citizen, once his comrade, to give him something to eat for God’s sake. His friend, preceding him to his house, said, “I will give you whatever you need as long as I live.” When this came to the ears of Waldo’s wife, she was not a little upset, and ran to the archbishop of the city as if she had lost her mind, and implored him not to let her husband beg bread from any one but her. This moved everyone who was present to tears.

[Waldo was accordingly conducted into the presence of the archbishop.] And the woman, seizing her husband by the throat, said, “Is it not better, husband, that I should redeem my sins by giving you charity than that strangers should do so?” And from that time he was not permitted to obtain food from any one in that city except from his wife.