“They claim to be good Christians.” Cathars (ca. 1200) Diverge from the Path of Rome.

Annals by Raynaldus; Translated by S. R. Maitland; and The Inquisitor’s Manual by Bernard Gui; Trans. J. H. Robinson. Both abridged and modernized by Stephen Tomkins. Edited and prepared for the web by Dan Graves. 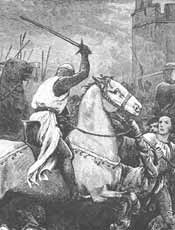 It was in this new age of stability and reborn culture that the first universities and Gothic cathedrals were born. This “renaissance” that we have been witnessing in Europe had been a case of new theology and spirituality, new writings and movements all along (broadly) orthodox lines. But it was inevitable that it would also throw up new movements that the church could not accept. The greatest of these was the Cathars (also called “Albigensians").

They began in the 12th century, and rejected the dominant Catholic church for its moral laxity: hence “Cathar", meaning “clean.” Catholics destroyed virtually every scrap the Cathars wrote, so we do not know their side of the story, but according to Catholic sources, Cathars believed the whole material world to be evil. Salvation lay in becoming one of the Perfect — undergoing the rite of “consolation” and from then on abjuring sex and marriage, all animal products, possessions, oaths, and war.

The account below excerpts two different sources. The first is from the Annals of a historian called Raynaldus, who wrote c. 1200. The second is from a handbook of the Inquisition, written a hundred years later by the inquisitor Bernard Gui. The book is full of guidance for Inquisitors on the questioning of suspected heretics, and ends with information about various heresies in existence, including the Cathars. Considering Catholic rhetoric against the innocent Waldensians at that time (and the church’s savage killing of them, and burning the Bible translations they had made), historians have to ask if the claims made here are accurate. This is all the more necessary in light of attitude with which church authorities greeted Savonarola, Wycliffe, Hus and later reformers during following centuries. At the Reformation, for example, both Protestants and Catholics lumped together good and bad Anabaptist groups and persecuted all of them without distinction. The historian cannot help but wonder whether good and bad Cathars were not similarly lumped together or even confused with Gnostic movements.

The inquisition grew out of the preaching ministry of St. Dominic. He devoted himself to winning the Cathars back to the Catholic faith, living among them in the same poverty as their holy men. However, later generations of his followers, the Dominican monks, were sent by popes to counter heresy as “inquisitors,” using interrogation, torture and burning as their weapons.

The heretics held that there are two Creators, one of invisible things, whom they called the benevolent God, and one of visible things, whom they named the malevolent God. They attributed the New Testament to the benevolent God, and the Old Testament to the malevolent God. They completely rejected it, except the passages that are quoted in the New Testament which they believed out of reverence to the New Testament. They charged the author of the Old Testament with falsehood, because the Creator said, “On the day you eat from the tree of the knowledge of good and evil you will die", [Genesis 2:17] they did not die, they say — although in truth, after the eating the forbidden fruit they were subjected to the misery of death. They also call him a murderer because he burned up Sodom and Gomorrah, destroyed the world in the flood and overwhelmed Pharaoh and the Egyptians in the sea. They claimed that all the Old Testament patriarchs were damned and that John the Baptist was one of the greater demons. They said also, in their secret doctrine, that there were two Christs. The one who was born in the visible and earthly Bethlehem and crucified in Jerusalem, was a bad man, they say, and Mary Magdalene was his concubine. They said that she was the woman caught in adultery that we read about in the gospel. The good Christ, they believed, never ate or drank. He did have a real body and was never in this world, except spiritually in the body of Paul....

They said that almost all the Church of Rome was a den of thieves, and the harlot that we read about in the Apocalypse. They dismissed the sacraments of the Church, teaching publicly that the water of holy Baptism was just the same as river water, and that the host of the most holy body of Christ was no different from common bread. They filled the ears of the simple with the blasphemy that the body of Christ, even if it had been as big as the Alps, would been long ago have been eaten up.

The considered confirmation and confession completely pointless. They preached that marriage amounted to fornication, and that no married people could be saved, if they had children. They denied the resurrection of the body, and inventing some unheard of notions: that our souls come from angels who were thrown down from heaven by the apostasy of pride and left their glorious bodies in the air, and that these souls themselves, after inhabiting seven earthly bodies of various kinds, finally fulfill their penance and return to those heavenly bodies.

Some of the heretics were called “the Perfect” or “Good Men,” and others were just called “the Believers.” “The Perfect” wore black clothes, claimed to be chaste, refused to eat meat, eggs or cheese, tried not to appear to be liars — though they were continually telling lies, mainly about God. They said also they should never swear an oath, for any reason. The “Believers” of the heretics lived like the world. Though they did not manage to imitate the life of the Perfect, nevertheless hoped to be saved in their faith; and though they were different in the way they lived, they were one with them in belief and unbelief. The “Believers” practiced usury, rape, murder, lust, perjury and every vice. They sinned with all the more confidence and less restraint because they believed that they would be saved — without restitution, confession or penance — if they just, on the point of death, said the Lord’s Prayer, and received laying on of hands from their teachers.

The leaders among the Perfect were called Deacons and Bishops. None of the Believers thought that they could be saved without these Deacons and Bishops laying their hands on them at the time of their death; but any dying person, however wicked, was considered saved when they laid hands on him, if he could just say the Lord’s Prayer, and without making any satisfaction, and without any other aid, he immediately flew to heaven.

An experienced inquisitor describes the Albigensians

It would take too long to describe in detail how these heretics preach and teach their followers, but it must be briefly considered here.

In the first place, they usually claim to be good Christians who do not swear, lie or speak evil of others. They say they do not kill any man or animal, nor anything with the breath of life. They say that they hold the faith of the Lord Jesus Christ, and his gospel, as the apostles taught. They claim to be the spiritual descendants of the apostles. They say it is because of all of their supposed perfections mentioned above that the Roman Church — the prelates, clerics, monks, and especially the Inquisitors — persecute them and call them heretics, although they are good men and good Christians. They say that they are persecuted just as Christ and his apostles were by the Pharisees.

They tell the laity of the evil lives of the clerics and prelates of the Roman Church, pointing out their pride, greed, uncleanness of life and such other evils as they know. They invoke the authority of the Gospels and the Epistles — with their own interpretation and according to their abilities — against the condition of the prelates, churchmen and monks, whom they call Pharisees and false prophets who say but do not do.

Then they attack and abuse all the sacraments of the Church. They especially revile the sacrament of the Eucharist, saying that it cannot contain the body of Christ, for even if his body had been as big as the largest mountain Christians would have entirely consumed it by now. They assert that the host comes from straw, that it passes through the tails of horses, (i.e. when the flour is cleaned by a sieve of horse hair), and that it passes through the body and comes to a disgusting end, which, they say, could not happen if God was in it.

Of baptism, they assert that the water is material and corruptible, and therefore the creation of the evil power and cannot sanctify the soul. They say that the churchmen sell this water out of greed, just as they sell earth for the burial of the dead, oil to the sick when they anoint them, and the confession of sins as made to the priests.

Hence they claim that confession made to the priests of the Roman Church is useless. They say that, since the priests may be sinners, they cannot forgive nor retain sins and, being unclean, cannot make others clean. They assert, moreover, that the cross of Christ should not be worshipped or venerated, because no one would venerate or adore the gallows upon which a father, relative or friend had been hung. They argue that those who adore the cross ought, for similar reasons, to worship all thorns and lances, because as Christ’s body was on the cross during the passion, so was the crown of thorns on his head and the soldier’s lance in his side.

And they proclaim many other scandalous things about the sacraments.

Moreover they read from the Gospels and the Epistles in the vernacular language, applying and expounding them in their favor and against the condition of the Roman Church. How they do this would take too long to describe in detail, but it may be read more fully in the books they have written and infected, and in the confessions of their followers that have been converted.