“It is Christ’s true flesh which we take.” Thomas Aquinas (1225—1274) States His Position on the Bread and Wine

The Sum of Theology by St Thomas Aquinas; Trans. Fathers of the English Dominican Province. Abridged and modernized by Stephen Tomkins. Edited and prepared for the web by Dan Graves. 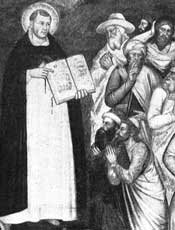 St Thomas Aquinas (1225—74) was possibly the greatest thinker in Christian history. The western church &emdash; profoundly molded by Plato’s philosophy from the start &emdash; had suddenly rediscovered the writings of Aristotle (thanks to contacts with Greeks and Muslims who had preserved them). These writings so upset the church’s way of thinking, many people wanted them destroyed.

Thomas (following the lead of several other scholastics) argued that Christian thinking should make room for Aristotle’s. God has given us brains to work out the truth &emdash; and then divine revelation to confirm it and to open up those areas that human reason can’t reach. This means that we must learn from the great pre—Christian philosophers, and philosophize for ourselves, allowing God’s revelation in the Bible and through the church to bring that thought to perfection and to correct it where it goes astray.

Thomas wrote two vast works along these lines. Against the Heathen was pure philosophy. Aimed at those (such as Muslims) who do not accept the Bible, it set forth all the truth Thomas thought we can know about life, the universe and God by pure, unaided reason &emdash; coming up with thoroughly Christian answers. The companion book for Christians, The Sum of Theology, used both philosophy and the Scriptures &emdash; along with many other Christian authorities &emdash; to unfold the whole of Christian truth. Thomas died before it was finished (and in fact apparently gave up writing shortly before his death after a mystical experience of God which made his life work seem “like straw"), but it was already over two million words long.

The extract below is a small part of his writing about what happens in the Eucharist. However the first Christians may have understood it, there were Christians by the second century who talked about the elements being changed into the actual body and blood of Christ. Throughout the Middle Ages most Christians accepted this quite literally, though there were also those who took it more symbolically. In recent centuries though, it had become a hot issue, and the church made its first official pronouncement on the subject at the Fourth Lateran Council in 1215, declaring that the bread and wine do indeed change, or “transubstantiate” to get technical. This is the point of view Thomas defends here, before going on to consider what Lateran IV did not, the question of how total the change is.

1. Is the body of Christ present in this sacrament in actual fact, or merely figuratively and symbolically?

Hilary says, “There is no doubt about the truth of Christ’s body and blood. We believe what the Lord himself declared, that his flesh is truly food, and His blood is truly drink.” And Ambrose says, “As the Lord Jesus Christ is God’s true Son, so is it Christ’s true flesh which we take, and his true blood which we drink.”

The presence of Christ’s true body and blood in this sacrament cannot be detected by the senses or by reason, but by faith alone, which rests upon Divine authority. Hence, on Luke 22:19 ("This is my body that shall be delivered up for you"), Cyril says, “Do not doubt whether this is true, but take rather the Savior’s words on trust, because being the Truth, he does not lie.”

This is appropriate for three reasons:

1. The perfection of the new law.

The sacrifices of the Old Law only contained the sacrifice of Christ’s Passion symbolically, according to Hebrews 10:1: “The law is a shadow of the good things to come, not the very image of those things.” It was therefore necessary for the sacrifice of the new law of Christ to have something more, namely, to contain Christ himself crucified, not merely figuratively, but in very truth. And therefore, in this sacrament which contains Christ himself, all the other sacraments, as Dionysius says, are perfected.

Out of love, Christ took on a true human body for our salvation. And because it is the special feature of friendship to live together with friends, as Aristotle says, Christ promises us his bodily presence as a reward: “Where the body is, there shall the eagles be gathered together.” [Mt. 24:28]

3. The perfection of faith.

This concerns Christ’s humanity just as it does his deity, as it says in John 14:1: “You believe in God, believe also in me.” And since faith is about things that are unseen, as Christ shows us his deity invisibly, so also in this sacrament He shows us His flesh in an invisibly.

Some men, not paying heed to these things, have contended that Christ’s body and blood are not in this sacrament except as in a sign — a teaching to be rejected as heresy, since it is contrary to Christ’s words. Berengarius, who the first deviser of this heresy, was afterwards forced to withdraw his error, and to acknowledge the truth of the faith.

It seems that the body of Christ is not truly in this sacrament, but figuratively, because when our Lord said, “Unless you eat the flesh of the Son of Man, and drink His blood,” etc. [John 6:54] many of his disciples replied, “This is a hard saying,” and he answered them “It is the spirit that gives life; there is no profit in the flesh.” [John 6:63] This seems to mean, as Augustine said, “Give a spiritual meaning to what I have said. You are not to eat this body which you see, nor to drink the blood which they who crucify me are to spill. It is a mystery that I put before you: I will give you spiritual life, not fleshly.”

The heretics wickedly misunderstand Augustine’s words and use them to justify their error. When Augustine says: “You are not to eat this body which you see,” he is not denying the truth of Christ’s body, he is saying that it was not to be eaten in the form in which they saw it. And when he says, “It is a mystery that I put before you: I will give you spiritual life, not fleshly,” he does not mean that the body of Christ is present in the sacrament only symbolically, but that it is there “spiritually,” i.e. invisibly and by the power of the Spirit.

Our Lord also said, “I am with you forever, even to the end of the world.” [Mt. 28:20] In explaining this, Augustine observes, “The Lord is on high until the end of the world, but the truth of the Lord is here with us. The body in which he rose again must be in one place; but his truth is spread everywhere.”

This saying of Augustine, and all others like it, are about Christ’s body as it was seen in its own form. This is what our Lord himself indicates when he says, “You have not always have me.” He is invisibly present in the form of the sacrament wherever it is performed.

Nobody can be in several places at once. Even angels cannot, or they would be everywhere. But Christ’s body is real, and it is in heaven. So, it seems that it is not really in the sacrament of the altar.

The Church’s sacraments are ordained for the profit of the faithful. But in one of Gregory’s sermons, a ruler is rebuked “for demanding Christ’s bodily presence.” Moreover, the apostles were prevented from receiving the Holy Spirit because they were attached to Christ’s bodily presence, as Augustine says on John 16:7: “Except I go, the Paraclete will not come to you.” Therefore Christ is not bodily present in the sacrament of the altar.

2. Does the substance of the bread and wine remain in the sacrament after the consecration?

Ambrose says, “Although the shape of the bread and wine still be seen after the consecration, you must believe them to be nothing other than the body and blood of Christ.”

Some have held that the substance of the bread and wine remains in this sacrament after the consecration. This opinion cannot stand, for four reasons:

1. It destroys the truth of the sacrament.

The truth is that Christ’s body exists in the sacrament although it was not there before the consecration. Now, a thing cannot be somewhere it was not previously, except by change of place or unless something else changes into it. Fire, for example, comes to be in a house, either because it was carried there, or because it started there.

Now, it is clear that Christ’s body does not come to be present in this sacrament by a change of place, for three reasons.

a) If it did, it would cease to be in heaven, because things that change place do not come to be in one place unless they leave the previous place.

b) Everything that changes place passes through all the intervening space, which cannot be said in this case.

c) Something that changes places cannot end up in a variety of places at once, but the body of Christ in this sacrament does come to be in several places at once. And consequently it remains that Christ’s body cannot begin to be anew in this sacrament except by change of the substance of bread into itself. But what is changed into another thing, no longer remains after such change. Hence the conclusion is that, saving the truth of this sacrament, the substance of the bread cannot remain after the consecration.

2. It contradicts the wording of the sacrament. It is said, “This is My body,” and this would not be true if the substance of the bread were to remain there, for the substance of bread is not the body of Christ. Instead one would have to say, “Here is My body.”

3. It would disagree with the worship of the sacrament It would not be right to worship if any substance other than the body Christ were in it.

4. It is contrary to the rite of the Church The Church forbids us to take the body of Christ after eating physical food, while it is nevertheless lawful to take one consecrated host after another.

Hence this opinion is to be rejected as heresy.

It seems that the substance of the bread and wine does remain in this sacrament after the consecration, because John of Damascus says, “Since it is customary for men to eat bread and drink wine, God has wedded his deity to them, and made them his body and blood.” He also says “The bread of communication is not simple bread, but is united to God.” To be wed together, two things must co—exist. Therefore the bread and wine are in the sacrament at the same time as the body and the blood of Christ.

God “wedded” his divine power to the bread and wine, not that these may remain in this sacrament, but in order that by this power he may change them into his body and blood.

The forms that remain in the sacrament are sufficient for this symbolism.