“By this symbol you will conquer.” Constantine’s History-Changing Vision.

The Life of the Blessed Emperor Constantine by Eusebius Pamphilus. Modernized and introduced by Stephen Tomkins. Edited and prepared for the web by Dan Graves. 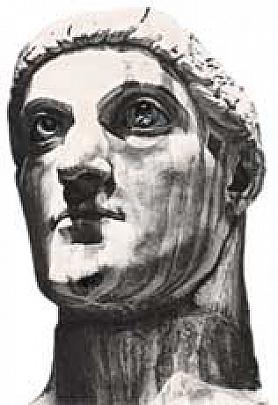 Throughout its first three centuries, the church went through unimaginable persecution from the Roman Empire, though all the time growing and spreading. So imagine what an extraordinary turn of events it was when the Roman Emperor himself became a Christian. Within one person’s lifetime, the Empire went from the most savage of its several persecutions of Christians to embracing Christianity.

The text tells the story of Emperor Constantine’s conversion, and a little of how his new faith was reflected in his imperial policy. In addition to what you’ll read below, he outlawed infanticide, the abuse of slaves and peasants, and crucifixion, and he made Sunday a day of rest.

This account is from a biography written by Eusebius, the Bishop of Caesarea in Palestine. He was a great historian, the first to make a significant contribution to church history, and his major work was The History of the Church which took him 25 years to prepare. He also knew Constantine personally, so in many ways it is a thoroughly reliable account. But he was obviously a devoted fan of Constantine, both personally and politically, which should caution us to watch for bias in his account. As you read, weigh how reliable and balanced you think the extract is, and whether or not Eusebius is right in his praise of Constantine’s influence on the church.

The numbered paragraphs  refer to numbered sections in the Life of Constantine.

Because of the wicked magical enchantments so diligently practiced by the tyrant [Maxentius, who was in control of Rome], Constantine was convinced that he needed more powerful aid than his military forces could give him, so he sought the help of God. He believed arms and soldiery less important than the help of the power of the invincible and unshakeable God. So he considered which god he could rely on for protection and help. It occurred to him that, of the many emperors who had preceded him, those who had put their hope in a multitude of gods and served them with sacrifices and offerings had been deceived by flattering predictions and oracles promising prosperity and come to a bad end, without one of their gods warning them of the impending wrath of heaven. On the other hand, the one who alone had condemned their error, honoring the one Supreme God throughout his whole life [i.e. his father], had found him to be the Savior and Protector of his empire. Reflecting on this…, he decided it would be great folly to join in the idle worship of those who were no gods, and to err from the truth after such convincing evidence. For this reason he felt bound to honor his father’s God alone.

Accordingly Constantine called on him with earnest prayer to reveal to him who he was, and stretch forth his right hand to help him in his present difficulties. And while he was thus praying with fervent entreaty, a most extraordinary sign appeared to him from heaven – something which it might have been hard to believe had the story been told by any other person. But since the victorious emperor himself long afterwards declared it to the writer of this history, when he was honored with his acquaintance and society, and confirmed his statement by an oath, who could hesitate to believe it, especially since other testimonies have established its truth? He said that about noon, when the day was already beginning to decline, he saw with his own eyes the sign of a cross of light in the heavens, above the sun, and bearing the inscription, “By this symbol you will conquer.” He was struck with amazement by the sight, and his whole army witnessed the miracle.

30. Making the Standard of the Cross

It was made in the following manner. A long spear overlaid with gold with a transverse bar laid over it formed the figure of the cross. A wreath of gold and precious stones was fixed to the top with the symbol of the Savior’s name with in it – the first two [Greek] letters of Christ’s name, the rho being intersected by chi in its centre. [These two letters look like X and P.] The Emperor took to wearing the two letters on his helmet at a later period. From the cross-bar of the spear was suspended a cloth, a royal piece, covered with a profuse embroidery of most brilliant precious stones; and being richly interlaced with gold it presented an indescribable beauty to the beholder. This banner was square, and the upright staff, whose lower section was of great length, bore a golden half-length portrait of the pious emperor and his children on its upper part, beneath the trophy of the cross, and immediately above the embroidered banner. The emperor constantly made use of this sign of salvation as a safeguard against every adverse and hostile power, and commanded that others similar to it should be carried at the head of all his armies.

32. Constantine is taught by the church

These things were done shortly afterwards. But at the time when he was struck with amazement at the extraordinary vision, and resolving to worship no other God than him who had appeared to him, he sent for those who were acquainted with the mysteries of his doctrines, and enquired who that God was, and what the vision meant. They affirmed that he was God, the only begotten Son of the one and only God: that the sign which had appeared was the symbol of immortality, and the trophy of that victory over death which he won in the past when visiting the earth. They told him about how he came to be born, and explained to him the true account of his incarnation. Constantine was in awe of the divine manifestation he had seen. Comparing the heavenly vision with the interpretation he was given, he found his judgment confirmed. Believing this knowledge had been given to him by God, he decided to devote himself from then on to the reading of the inspired writings. Moreover, he made the priests of God his advisers, and thought it his duty to honor the God who had appeared to him with all devotion. Then, being strengthened by this hope in God, he went quickly on to fight the fire of tyranny. ……

The Emperor personally invited God’s ministers to spend time with him. He showered them with every possible honor, treating them favorably as people who were consecrated to the service of his God. He let them join him at table, even though they were dressed so plainly, because he did not look at the outer man, but saw the God within him. They accompanied him on his travels, believing that the God they served would help him as a result. He gave vast a mounts of money from his own personal treasury to the churches of God, for the enlarging and heightening of their sacred buildings and for decorating the sanctuaries of the church.

He gave a great deal of money largely to those who were in need, even to non-Christians, who had no claim on him. Even the miserable, idle beggars in the forum he provided with money, food and good clothes. To those who had fallen from earlier prosperity he was even more generous….

44. Constantine at the Bishop’s Conference

This is what he was like to everybody, but he particularly cared for the church of God. When churches in different regions had a disagreement, he, like some bishop-of-bishops constituted by God, called his ministers to a conference. He was not above sitting with them in their meeting, and even took part in their discussions, taking charge of everything that concerned the peace of God. He took his seat in the midst of them as one individual amongst many, dismissing his bodyguards and soldiers because he was protected by the fear of God and surrounded by the guardianship of his faithful friends. Those whom he knew to be calm, conciliatory and sound in judgment received his highest approval, because he delighted in harmony and agreement, and did not look kindly on the unyielding and dogmatic.