“He became what we are that we might become what he is.” Athanasius (ca. 296-373) on Christ’s Incarnation

The Incarnation of the Word by St Athanasius. Trans. by Rev. A. Robertson; Modernized, abridged and introduced by Stephen Tomkins. Edited and prepared for the web by Dan Graves. 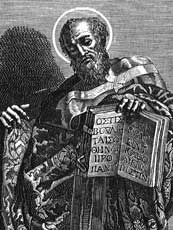 In the fourth century, during the time of Constantine, the church was rocked by a controversy started by Arius, a deacon of the influential church of Alexandria in Egypt. Arius denied that Christ was truly and fully God, arguing from the Bible that only the Father was truly God, and the Son was the firstborn of creation.

Athanasius was his arch-enemy – and a deacon in the same church. His main disagreement with Arius concerned salvation: we are saved because in Christ God himself became a human being and died a human death. God became a human to make humans divine; the immortal became mortal to raise mortals to immortality. No mere creature could achieve this but only the very Word of God.

The Incarnation of the Word is Athanasius’ most famous writing, and his most celebrated statement of his case against the Arians. His theology was recognized by the Council of Nicea as being the true Gospel of Christ, and as such it has been passed down the centuries. What you are about to read therefore shows the Christian faith, that most of us now take for granted, being forged in the heat of battle.

The numbered paragraphs below refer to numbered sections in the Incarnation of the Word. When section numbers seem out of sequence, it is because some are skipped and others are from different chapters.

7. Repentance cannot remedy fallen nature: we are corrupted and need to be restored to the grace of God’s image, and no one can renew but he who created. He alone could recreate all, suffer for all, represent all before the Father. Once transgression had got a head-start, human nature ended up completely corrupted and deprived of the grace which we once had from being in the image of God. Our repentance was no longer enough to restore this grace and give us the new beginning that we needed. What was needed then? The Word of God, who at the beginning made all out of nothing. Only he could restore the corruptible to incorruption, while maintaining the justice of the Father towards us. He alone, being the Word of the Father and above all, was able to recreate everything, and worthy to suffer on behalf of all and to be ambassador for all to the Father.

8. The Word visits the earth, where he has always been present, and sees its evil condition. He takes a human body, born of a pure virgin in whose womb he makes human flesh his own, in which to reveal himself, conquer death, and restore life. For this purpose, [to restore creation, to suffer for us and to appeal on our behalf to the Father] the incorporeal and incorruptible Word of God comes to our realm. But he was never far from us, because no part of creation has been emptied of his presence: he fills all things everywhere, while remaining present with his Father. But he humbled himself and came to show his love for us, and to visit us.

2. He saw the human race perishing and death and decay reigning over them. He saw that the penalty for our sin gave this corruption a firm hold over us, and that until the law was fulfilled this could not be changed. He saw how awful it was that his own work was passing away. He saw the great wickedness of humanity, and how it had grown little by little to an intolerable pitch. And he saw all humanity under penalty of death. Seeing all this, he took pity on our race, and had mercy on our weakness, and lowered himself to our corruption. He could not bear to let death have mastery, to allow these creatures to perish, and his Father’s handiwork come to nothing, and so he took on a body, no different from ours.

3. He could simply have appeared to us, coming to us in some grander way, but this was not what he wanted. He took a body like ours, from a pure and spotless virgin who had never been with a man. Being the powerful creator of everything, he prepared this body in the virgin as a temple to himself, and appeared in it and lived in it.

4. Having taken a body like ours, because we were all under the penalty of death he gave his body up to death in our place, offering it to the Father. He did this out of love, so that we who are counted as having died in him might be freed from the law that meant our ruin.(The power of this law was completely spent in the Lord’s body, and so has no foothold left against his fellow human beings.) …

9. Since only death could stop the plague, the Word took a mortal body, so that all who become united with him might receive his immortality. Being above us all, his flesh was a worthy offering for our souls; being one with us all, he clothed us with his immortality.

1. The Word knew that death was the only way that humanity could be saved from corruption, and yet it was impossible for the Word to suffer death, being immortal and Son of the Father. Therefore, he took on a body capable of death, so that this body, being joined to the Word who is above all, might be worthy to die in the place of all, and might, being inhabited by that Word, remain incorruptible, stopping our own corruptibility from then on by the grace of the resurrection. By offering up this body to death, as a pure sacrifice, he instantly took death away from all his fellow people. …

3. It is like when a great king enters a city and stays in one of the houses there. The city is held in high regard by others, and its enemies no longer attack it, all because of the king’s residence in a single house there. So it is with the Monarch of all.

4. He has come to our realm, and made his home in one body among his fellow people. As a consequence, the whole conspiracy of the enemy against mankind is beaten off, and the corruption of death which previously overcame them is finished. The human race would have gone to ruin, if the Lord and Savior of all, the Son of God, had not come among us to meet the end of death.

10. Christ wipes away our ruin, and provides its antidote by his own teaching. Scripture proofs of the incarnation of the Word, and of his Sacrifice. This great work was especially suited to God’s goodness. When a king founds a city, if it is attacked by bandits from the carelessness of its citizens, he certainly does not neglect it, but avenges and reclaims it, for the sake of his own honor. How much more did God the Word of the all-good Father refuse to let humans, his work, go to corruption. He blotted out their death by the offering of his own body, and corrected their neglect by his own teaching, restoring all that was theirs by his own power. …

3. [The writer of Hebrews] explains why it was necessary for none other than God the Word himself to become incarnate: “For it was fitting that he, for whom and through whom all things exist, in bringing many sons unto glory, should make the pioneer of their salvation perfect through suffering”. [Heb 2:10] By this he means that the work of rescuing humanity from corruption belonged to none other than the Word of God who had made them in the beginning.

4. He also points out that it was to offer a sacrifice for flesh such as his own that the Word took on human flesh, saying, “Since the children share the same flesh and blood, he shared the same things so that through death he could bring down the one who had the power of death – the devil – and deliver them who were all their lives held captive to the fear of death”. [Heb 2:14]

5. By the sacrifice of his own body, he put an end to the law which was against us and made a new beginning for us by the hope of resurrection. It was because of humans that death prevailed over humanity, and because the Word of God became human that death was destroyed and life raised up again. One follower of Christ said: “Since death came through humanity, through humanity came the resurrection of the dead. For as in Adam all die, so in Christ shall all be made alive”. [1 Cor 15:21] We no longer die in condemnation, but await the resurrection of all, “which he will bring about at the right time,” [1 Tim 6:15] – he being God, the one who brought it about and bestowed it upon us.

13. Was God to keep silence allowing us who were made to worship him give that worship to false gods? A comparison with a king, showing that God must restore the grace of his image to us. As humans cannot achieve this, the Word himself must come to recreate, and to destroy death in the body.

1. With humanity being dehumanized, and clouded by demonic deceit which hid the knowledge of the true God, what was God to do? Keep silent about this terrible thing and allow us to be led astray?

2. What then would be the use of having made us in his image? It would have been better to leave us as dumb animals than to see those who had been raised to rationality descending to the life of brutes.

3. And why would we have needed to receive the idea of God in the first place? If we are not fit to receive it now, it would be better not to have been given it at all.

4. And what profit or glory could it be to God if his creatures do not worship him, but think that others are their makers – as if God made us for other gods?

5. Consider again a mere human king. He would not let his colonies pass to other rulers. He would warn them by letters, often sent by friends; or, in the last resort, he would come in person rebuking them by his presence, so that they would not serve others and make his work in vain.

6. How much more would God spare his own creatures, and stop them being led astray from him to serve worthless things – especially when such rebellion is the cause of their ruin, and since it was a disgrace that they should perish when they had once been in God’s own image?

7. What then was God to do? What else but to renew his image in humanity, so that by that image humans might once more be able to know him? But how could this happen, but by the coming of the very Image of God, our Lord Jesus Christ? By human means it was impossible, since they are only copies of that image; neither could angels achieve it, for they are not God’s images. Therefore the Word of God came in person, so that, being the image of the Father, he would be able to recreate humanity afresh in that image.