“Nicea” from The History of the Church; Book 1, chapter 8: The council that was held at Nicea in Bithynia, and the Creed that it published. by Socrates Scholasticus. Abridged, modernized and introduced by Stephen Tomkins. Edited and prepared for the web by Dan Graves. 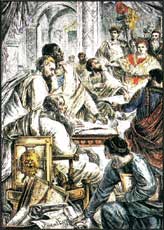 Constantine at the Council of Nicea.

Emperor Constantine was deeply upset by this division, not least because it threatened the stability of the Empire. And so he summoned a conference of all the bishops of the church the first ecumenical (“worldwide”) council – though, being in Nicea in Asia Minor, few representatives from the western churches made it to the meeting. The council agreed that Jesus is truly God, and so it published a creed stating the Christian faith in a way that thoroughly condemned Arianism. This account is from a History of the Church, by Socrates Scholasticus, who wrote 100 years after Eusebius. He was not born at the time of the council, but much of his account consists of direct quotations from Eusebius’s Life of the Constantine and from a letter of the earlier historian.

As Eusebius was present at the council, this is good eye-witness testimony; but as he faced a bit of flak from his home church for agreeing with the creed, and was elsewhere under suspicion of heresy for being reluctant to assent to the creed, you’ll bear in mind that Eusebius wrote with an axe or two to grind. Socrates’ recounts some of the deliberations of the council, highlighting the role of Emperor Constantine, and includes the Nicene Creed itself. He also includes Eusebius’s letter to his church explaining why he eventually accepted the creed – and, it has been said, trying to wriggle out of the real meaning of the creed. This illustrates the reservations that some middle-ground Christians had with the Nicene Creed. It’s not the easiest reading in the world, but the one crucial term to try and get your head round is the “substance” of God. This is very different to the modern idea of a physical “substance” like milk, and means something more like “being,” or “nature.”

The History of the Church Socrates Scholasticus.

Neither Alexander nor Arius was won over by the Emperor’s appeal, and there was endless trouble and commotion among the people. [There was also disagreement about the celebration of Easter.] When the emperor saw the Church troubled by both these problems, he called a General Council, summoning all the bishops by letter to meet him at Nicea in Bithynia. And so the bishops came together from their various provinces and cities. To quote Eusebius Pamphilus:

The most distinguished of God’s ministers from all the churches which abounded in Europe, Africa, and Asia assembled here. The one sacred building, as if stretched by God, contained people from [a very long list of nations]. There were more than 300 bishops, while the number of elders, deacons and the like was almost incalculable. Some of these ministers of God were eminent for their wisdom, some for the strict living, and patient endurance of persecution, and others for all three. Some were venerable because of their age, others were conspicuous for their youth and mental vigor, and others were only just appointed. The Emperor provided them all with plenty of food.

The Emperor, having just celebrated his victory over Licinius, came in person to Nicea. There were among the bishops two of extraordinary celebrity: Paphnutius, bishop of Upper Thebes, and Spyridon, bishop of Cyprus… Many lay people were also there to argue for their own party. Eusebius, bishop of Nicomedia, [not to be confused with Eusebius Pamphilus, Bishop of Caesarea] supported the opinion of Arius. These were powerfully opposed by Athanasius, a deacon of the Alexandrian church, who was highly esteemed by Alexander his bishop, and therefore provoked great jealousy….

When the emperor arrived, he stood among the bishops, and as a mark of his reverence for them, he would not take his seat until the bishops nodded their assent. When they fell quiet, the emperor exhorted them to harmony and unity, and entreating them to lay aside all private grievances. (This is because many of them had brought him petitions and written complaints against each other as soon as he arrived, and he had told them to concentrate on the matter in hand and burned the lot, saying, “Christ tells all who want forgiveness, to forgive their brothers.”) Having insisted vehemently on harmony and peace, he turned to the questions that they had come to discuss. To quote Eusebius again:

The various sides in the conflict each raised their own points, and from the start there was a tremendous argument. The Emperor listened to them all with patiently, impartially and attentively considering everything that was said. He spoke in support of one side and then another, and that way gradually softened the bitterness of the conflict with his mildness and affability. He spoke to them in Greek language, because he was not ignorant of it [his mother tongue was Latin], and managed to be both interesting and persuasive. He convinced some with his arguments, and won round others by entreaty. When anyone spoke well, he applauded. Urging them to be of one mind, he eventually succeeded in bringing them to agreement on all the issues before them. They were united in the confession of faith, and also about the date of Easter. And each individual put his signature to their common doctrine.

This is the agreement of faith that the great council of Nicea, assented to with a loud acclamation:

We believe in one God, the Father Almighty, Maker of all things visible and invisible;

And in one Lord Jesus Christ, the Son of God, the only-begotten of the Father, of the substance of the Father; God of God and Light of Light; true God of true God; begotten, not made, of the same substance as the Father, by whom all things were made, in heaven and on earth: who for the sake of us men and our salvation, descended, became incarnate, and was made man, suffered, arose again on the third day, and ascended into the heavens, from where he will come again to judge the living and the dead;

And in the Holy Spirit.

But the Holy Catholic and Apostolic church anathematizes those [i.e. the Arians] who say “There was a time when he was not,” and “Before he was begotten, he did not exist” and “He was made from that which did not exist.”The same goes for those who assert that he is of a different substance or essence from the Father, or that he was created, or can be changed.

This creed was recognized and agreed to by 318 members of council, who being, as Eusebius says, unanimously signed up to it. There only five who refused to sign, objecting to the term homoousios, “of the same substance.” They were Eusebius bishop of Nicomedia, Theognis of Nice, Maris of Chalcedon, Theonas of Marmarica, and Secundus of Ptolemaïs. “Of the same substance,” they insisted, “means coming from something in one of three way: by germination, as a shoot comes from the roots; by derivation as children come from their parents; or by division, as two bowls come from one lump of gold. But the Son does not come from the Father in any of these ways. For this reason, we cannot agree to this creed.” Having scorned the term “of the same substance,” they would not sign to the deposing of Arius either. So the council anathematized Arius, and all who adhered to his opinions, banning him from ever returning to Alexandria.

The Emperor sent Arius into exile, along with Eusebius and Theognis and their followers. Eusebius and Theognis, however, soon after their banishment, wrote a declaration that they had changed their opinion, and now agreed in the belief that the Son and the Father are of the same substance. Going back to the time of the council, Eusebius Pamphilus, bishop of Caesarea in Palestine, spent a while on his own deliberating over whether he could agree with the definition of the faith given in the creed.

In the end, he acquiesced and signed it along with the rest. He sent a copy of the creed back to his church, with a letter to explain the term “of the same substance” so that no one would misinterpret his motives in agreeing to it after his previous hesitation. This is what he wrote:

You have probably heard rumors, my loved ones, about what has been happening at the great council of Nicea, in connection with the faith of the Church. So that you will be properly informed, I will tell you about (1) the creed I proposed myself, and (2) the other creed which has been published, consisting of ours with certain additions.

1. The declaration of faith I proposed was read before our most pious Emperor, and seemed to meet with universal approval. “This is the declaration of faith passed on to me by the bishops who preceded me, used in instruction and in baptism. It is the truth I have learned from the sacred scriptures, and what I have believed and taught as an elder and bishop: “We believe in one God, the Father Almighty, Maker of all things visible and invisible; And in one Lord, Jesus Christ. the Word of God, God of God, Light of light, Life of life, the only-begotten Son, born before all creation, begotten by God the Father before all ages, by whom all things were made; who for our salvation became incarnate, and lived among us; and who suffered and rose again on the third day, and ascended to the Father, and shall come again in glory to judge the living and the dead. We believe also in one Holy Spirit. …”

No one opposed this creed. In fact our most pious Emperor himself was the first to admit that it was perfectly correct, and reflected his own belief. He called on all present to agree, and sign up to the creed, but also called for the addition of that one word “homoousios” ["of the same substance"]. He himself explained that the term does not describe a bodily state or physical properties, and so it is not saying that the Son comes from the Father as a division of his being or as a cutting off from it. God’s nature, he said, is not a physical or bodily thing, and so cannot possibly be in a physical state. Therefore, we can only understand such things in divine and mysterious terms.

I also had no objections to the anathema added at the end, because it prohibits the use of illegitimate terms which caused almost all the present commotion in the churches. And, since no divinely inspired scripture contains the expressions, “made from that which did not exist,” and “there was a time when he was not,” etc. it seemed unacceptable to say or to teach them. Moreover, I have not been in the habit of using such terms myself. I thought it my duty, my loved ones, to let you know how cautious I have been in considering and agreeing to these things. On justifiable grounds, I resisted some objectionable expressions to the last moment, as long as they were unacceptable, but when on mature deliberation the meaning of these words seemed in harmony with the sound creed I had originally proposed, I agreed to them without dispute.