“Sermon III: On the third Anniversary of His Elevation to the Pontificate” by Pope Leo I. Introduced by Stephen Tomkins. Edited and prepared for the web by Dan Graves. 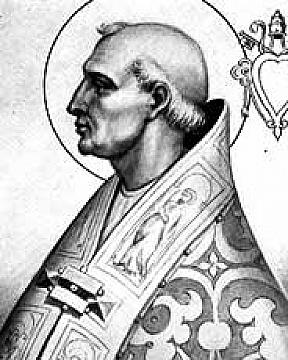 “Pope” or “father” is a title that was given to all the Patriarchs in the Early Church, such as the Bishops of Alexandria, and Antioch, but in the end of course came to refer especially to the Bishop of Rome. What status exactly the Bishop of Rome should have in the worldwide church was a matter of some contention. The eastern churches were generally happy to agree that it was the position of greatest honor in the church, having been the seat and death-place of St Peter and St Paul, as well as the imperial capital. But Rome itself went further, making claims of power and authority over all the other churches and their bishops.

Leo the Great was the Pope of Rome from 440 to 461, and a great champion of Roman supremacy. He stressed that he personally was not a greater Christian than others, but as Bishop of Rome he is the embodiment of St Peter, inheriting from him the power and authority that Christ endowed him with in the Gospel. This sermon was delivered in Rome on what he calls his third “birthday” as Pope, and sets out his understanding of the papacy.

I. On being raised to the episcopate, the glory must be given Solely to the Divine Head of the Church.

Whenever God in his mercy brings round the anniversary of the gifts he has given to us, we have, dearly beloved, good and proper reason to rejoice – as long as it is he who gave us this office who is praised. Maybe all God’s priests acknowledge him in this way, but I believe I am especially obliged to do so. In view of my own complete insignificance and the greatness of the office I have undertaken, I should exclaim along with the Prophet,” Lord, I heard your speech and was afraid: I considered your works and was dismayed.” [Hab. 3:2] For what could be more unexpected or unnerving than a task being assigned to the frail, the exaltation of the lowly, and dignity given to the undeserving?

However, we do not despair or lose heart, because we put our trust not in ourselves but in him who works in us. For this reason, dearly beloved, we sing with harmonious voice the psalm of David – not in our own praise, but to the glory of Christ the Lord, about whom it was prophetically written: “You are a priest for ever according to the order of Melchizedeck” [Ps. 110:4] – i.e. not according to the order of Aaron, whose priesthood was a temporal ministry passed on to his sons, and ceased with the law of the Old Testament, but after the order of Melchizedeck, who prefigured the eternal High Priest. No reference is made to Melchizedeck’s parentage because he portrayed him whose generation cannot be declared. And now that this divine priesthood has at last descended upon humans, it is not passed by the line of birth; instead it is passed on to those men prepared by the Holy Spirit who are received by the Church as its rulers. Therefore the anointing is not given on the basis of earthly status or parentage – after all, the whole body of people adopted by God is priestly and royal. Rather it is the coming of God’s grace which makes a man a bishop.

II. The priesthood is handed on from Christ, through St Peter, in perpetuity.

We might be found weak and slothful in fulfilling the duties of our office, because however great our desire, we are hindered by our frail humanity. Nevertheless, we have the benefit of the unceasing propitiation offered by the almighty and everlasting Priest, who, being like us and yet equal with the Father, brought down his Godhead to humanity, and raised his humanity up to divinity. We worthily and piously rejoice over his arrangement in delegating the care of his sheep to many shepherds, yet without abandoning his own guardianship of his beloved flock. From his eternal protection we have received the help of the Apostles too, which certainly never ceases.

The strength of the foundation, on which the whole structure of the Church is built, is not weakened by the weight of the temple that rests upon it. That faith for which the chief of the Apostles was praised is forever firm. And as that faith that Peter had in Christ remains, so that which Christ instituted in Peter remains. When, as you heard in the reading from the Gospel, the Lord asked the disciples whom they believed Him to be amid the various opinions that were held, and the blessed Peter replied, saying, “You are the Christ, the Son of the living God,” the Lord says, “Blessed are you, Simon Bar-Jona, because flesh and flood has not revealed this to you, but My Father who is in heaven. And I say to you, that you are Peter, and upon this rock will I build My church, and the gates of Hades shall not prevail against it. I will give you the keys of the kingdom of heaven, and whatever you bind on earth, shall be bound in heaven; and whatever you loose on earth, shall be loosed also in heaven.” [Matt. 16:16-19]

III. St Peter’s work is still carried out by his successors.

This dispensation remains, and the blessed Peter, persevering in the strength of the rock has not abandoned the helm of the Church. For he was ordained, before the rest of the apostles, in such a way we might know the nature of his association with Christ – from his being called the Rock, from his being proclaimed the foundation, from his being appointed the doorkeeper of the kingdom of heaven, and from his being set as the judge to bind and to loose, whose judgments shall retain their validity in heaven. Still today he fully and effectually performs what was entrusted to him, and carries out every part of his duty and charge, in Christ through whom he has been glorified. And so if we do or decree anything rightly, if our daily prayers win anything from the mercy of God, it is through his work and merits whose power lives and whose authority prevails in his See.

This state of affairs, dearly-beloved, was achieved by the Apostle’s confession, which, inspired in his heart by God the Father, rose above all the uncertainty of human opinions, and was given the firmness of a rock, which no assaults could shake. And even now daily, through the Church Peter says, “You are the Christ, the Son of the living God,” and every tongue which confesses the Lord, accepts his instruction. This faith conquers the devil, and breaks the bonds of his prisoners. It uproots us from this earth and plants us in heaven, and the gates of Hades cannot prevail against it. For God has given it such firmness that the depravity of heretics cannot mar it nor the unbelief of the heathen overcome it.

[IV. This festival is in St Peter’s honor, and the advance of his of his flock gives him the glory.

And so, dearly beloved, we obediently celebrate today’s festival, in such a way, that in my lowly person he may be recognized and honored – he who takes care of all the shepherds together with his sheep and whose dignity is not diminished even in such an unworthy heir as me. Hence, the presence here of my venerable brothers and fellow-priests, which I desire and value so much, will be all the more sacred and precious, if they transfer the chief honor of this service to him whom they know to be not only the patron of this see, but also the primate of all bishops. Therefore when we utter our exhortations in your ears, holy brothers, you should believe that it is he whom we represent that is speaking to you. When we warn you, it is his warning that we give; and we preach nothing but his teaching, beseeching you to “gird up the loins of your mind,” [1 Pet. 1:13] and lead a chaste and sober life in the fear of God, and not to forget his supremacy and consent to the lusts of the flesh. Short and fleeting are the joys of this world’s pleasures which attempt to turn aside from the path of life those who are called to eternity.

The faithful and religious spirit must desire the things of heaven, and being eager to receive what God has promised, lift itself to the love of the incorruptible Good and the hope of the true Light. You can be sure, dearly-beloved, that your labor to resist vices and fight against carnal desires is pleasing and precious in God’s sight, and in his mercy it will profit not only yourselves but me also, because the zealous pastor may boast of the progress of the Lord’s flock. “You are my crown and joy,” as the Apostle says, [1 Thess. 2:20] if your faith – which from the beginning of the Gospel has been preached in all the world – has continued in love and holiness. For though the whole Church, across all the world, should be full of every virtue, it is especially fitting that you above all people should excel in deeds of piety. Being founded as you are on the very citadel of the Apostolic Rock, not only has our Lord Jesus Christ redeemed you in common with all men, but the blessed Apostle Peter has instructed you far beyond all men. Through the same Christ our Lord.

Leo I claims that the bishop of Rome is above all other bishops.

Leo I claims that the bishop of Rome is above all other bishops.