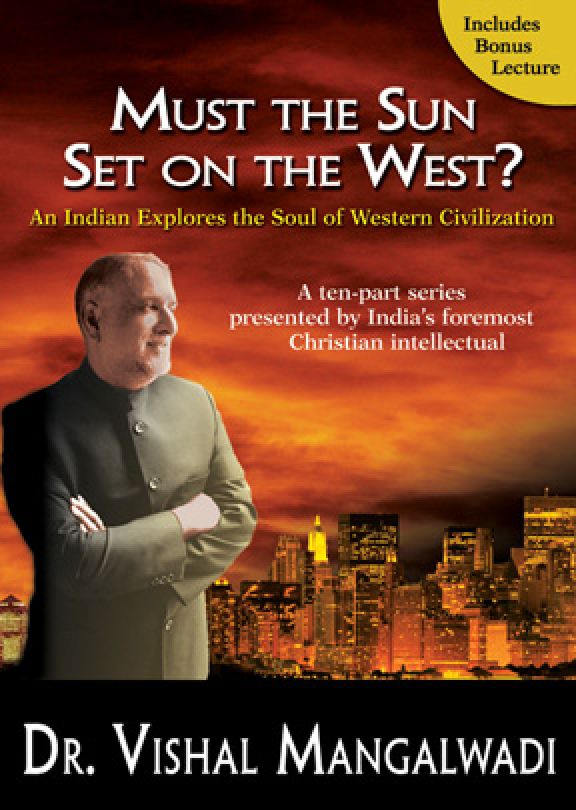 Must The Sun Set On The West?

The late Chuck Colson called Vishal Mangalwadi, “One of the greatest Christian worldview thinkers of our time.” Now, Mangalwadi, an Indian-born intellectual, social reformer, and author of 13 books, has released a series of lectures on DVD called Must the Sun Set on the West?

This series is based on the book entitled "The Book that Made Your World: How the Bible Created the Soul of Western Civilization". These lectures, recorded at the University of Minnesota, fill a vital need for anyone who wants to understand the root cause of the West's decline and what must be done to reverse it. With charm and passion, Dr. Mangalwadi argues that the Bible is the soul of Western Civilization and its rejection and replacement by the secular narrative has led to a gradual but ever-intensifying decline. But far from being a prophet of doom, Mangalwadi gives hope for Western renewal based on a return to biblical values. This is a 3 disc DVD set which includes ten 60-minute lectures plus one bonus lecture:

1. From Michelangelo to Freud: The Devolution of Human Dignity
In this lecture, Dr. Vishal Mangalwadi suggests that the doctrine of human dignity was a foundational assumption that made the West unique.

2. From Bach to Cobain: Losing the Soul of Music and Hope
In this lecture, Dr. Vishal Mangalwadi explores what made the West a uniquely musical and optimistic civilization, enabling it to sing "Joy to the World" in a world full of evil and suffering.

3. From Da Vinci to Dan Brown: The Decline from Reason to Mysticism
For 500 years, scholars recognized Leonardo da Vinci as a quintessential Renaissance man: a man of reason. Now novelist Dan Brown has fictionalized da Vinci into a promoter of non-rational sexual mysticism.

4. From Science to Sorcery: Why Witchcraft Appeals More Than Science
This lecture explains why the postmodern West is more interested in Harry Potter than Isaac Newton.

5. From Luther's Vicarage to Hefner's Harem: Turning Men into (Play)boys and Women into 'Desperate Housewives'
In this lecture, Dr. Vishal Mangalwadi explains why the postmodern West is becoming a culture of desperate housewives. It is turning men into boys who cannot take responsibility for the women they love and the children they produce.

6. From the Scottish Reformation to the Iraqi War: Does Washington Know the West's Recipe for Freedom?
In this lecture Vishal Mangalwadi argues that the American attempt to liberate Iraq became a quagmire, at least for a while, because the Sunnis have good reason to fear a Shi'ite majority. The tyranny of the majority can be infinitely worse than the tyranny of a despot.

7. From the Great Awakening to a 'New Age': Beyond Good and Evil
In this lecture, Dr. Mangalwadi explains how morality was written into the DNA of the West. He reminds us that in the early 18th century, the West was as corrupt as most nations are today. It was transformed by spiritual revivals that resulted from the preaching of the gospel by men such as Jonathan Edwards, George Whitefield, and John Wesley.

8. From Paul to Paris Hilton: Can a Defeated Messiah Save Hollywood Heroes?
Dr. Vishal Mangalwadi points out that the heroism that built the West consisted of an inner spiritual substance. 20th-century thinking has secularized charisma into a superficial, external makeup.

9. From Tolerance to Terrorism: Why Do Taxpayers Pay Advocates to Defend Law Breakers?
This lecture was delivered days after a jury found a 23-year-old British woman, Samina Malik, guilty of possessing terrorist literature. The lecture traces the history of tolerance from 17th-century philosopher John Locke, who defended freedom of belief and expression, to Ms. Malik, who was convicted for her faith in radical Islam, and for expressing her religious ideas in poetry.

10. From Darkness to the Light: Must the Sun Set on the West?
Dr. Vishal Mangalwadi asserts that the sun need not set: a revival is possible. He describes how he discovered the light. His secular education had left him with nothing but skepticism and nihilism. Its worst aspect was that the university taught him absolutely nothing about the light that liberated and modernized his motherland India.

Bonus Lecture - From Monasteries to the Twin Towers: The Crumbling Spirituality of Capitalism
Most people assume that business and management are secular activities, but on the basis of his firsthand experience, Dr. Mangalwadi explains how religion prevented his native India from developing industrial capitalism and professional management.

Vishal Mangalwadi is an international lecturer, social reformer, cultural and political columnist, and author of thirteen books. Born and raised in India, he studied philosophy at universities, in Hindu ashrams, and at L’Abri Fellowship in Switzerland. In 1976 he turned down several job offers in the West to return to India where he and his wife, Ruth, founded a community to serve the rural poor.

In demand worldwide, Vishal is a dynamic and engaging speaker who has lectured in 34 countries. He enjoys simplifying complex ideas and inspiring despairing hearts with hope.

My Journey to Life: On the Trail of Celtic Saints