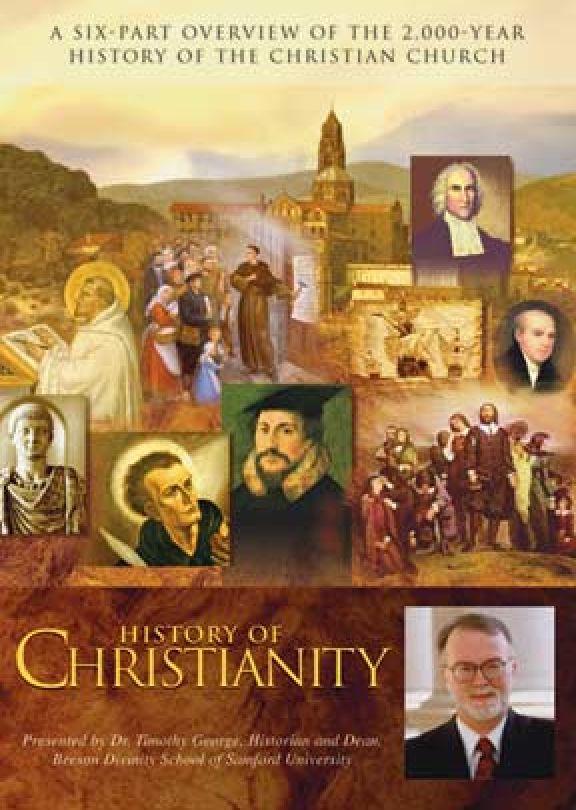 This is a survey course designed to further stimulate your curiosity by providing glimpses of some of the pivotal events in the spread Christianity and sketches of great Christian figures who have significantly affected Christian history thereby shaping the history of the world. Kit includes six half-hour programs and PDFs of the leader's guide, program scripts, and student workbook.

This is a survey course designed to further stimulate your curiosity by providing glimpses of some of the pivotal events in the spread Christianity and sketches of great Christian figures who have significantly affected Christian history thereby shaping the history of the world. Kit includes six half-hour programs, leader's guide, program scripts, and reproducible student workbook. Fullscreen.

PART I: The Early Church -- From the executions of Peter and Paul in Rome to the death of Augustine in North Africa, we follow the Early Church as she emerges from the womb of Judaism to survive horrendous persecution and become established in the Roman world. Explore what took place at the early Ecumenical Councils and how the great doctrines of the Church were formulated.

PART II: The Church in the Middle Ages: Quest for Order in Medieval Christendom -- During this period in history, universities, monasteries, and museums were established. The Church, with her majestic Cathedrals, joined these institutions in influencing society. But this interaction with culture was not without difficulties: barbarian invasion, crusades, the Muslim challenge. Also, during this period, Christendom was divided into the Eastern Church and the Western Church.

PART III: The Reformation: Division and Renewal Between Medieval and Modern Times -- It was an age of exploration and discovery, of art and literature. The Medieval Church, however, had placed too much emphasis on the church as an institution. As a result, the papacy enjoyed unusual power often coupled with unusual corruption. Cries of reform were heard all over Europe. The Protestant Reformation of the sixteenth century was a tremendous movement of spiritual and ecclesial renewal.

PART IV: The Age of Reason and Piety -- During the two centuries between the death of Martin Luther in 1546 and the conversion of John Wesley in 1738, the Christian world experienced a major paradigm shift from an "age of faith" to an "age of reason." On the heels of Copernicus' discovery that the earth is not the center of the universe, rose "the Enlightenment" -- a movement that shifted the focus away from God and to human creativity.

PART V: A City Set on a Hill: Christianity in the New World -- America was the land of new beginnings. Europe represented for Americans a corrupt past, whose contamination they wished to escape. This period includes the study of great traditions such as the Puritans and Quakers, and great movements such as the First Great Awakening.

PART VI: Into All the World: Christian Movement in an Age of Uncertainty -- From the fall of Bastille in 1789 (marking the beginning of the French Revolution) to the fall of the Berlin wall in 1989 (marking the end of communism), study the Christian movement in an age of uncertainty. William Carey, the "father of modern missions" carries the Gospel to India; others followed to remote regions -- people like David Livingstone, Lottie Moon, Henry Martyn, and Hudson Taylor. Explore the Christian Church as it moves into all the world.

Presenter-host Dr. Timothy George is an Historian and Dean of Samford University’s Beeson Divinity School. Trained in theology and church history at Harvard University, he has written numerous articles and books including Theology of the Reformers, John Calvin and the Church, and Faithful Witness: The Life and Mission of William Carey. George also serves as senior editor of Christianity Today.

PDFs included on the DVD:
-48-page leader's guide with background information and discussion questions
-48-page student workbook
-Scripts for each of the six programs