Issue 66 How the West Was Really Won 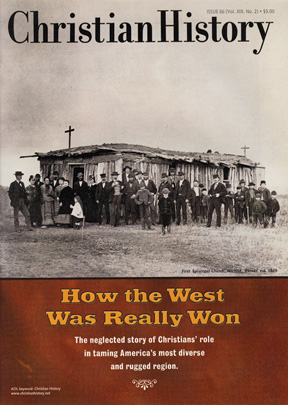 How the West Was Really Won: Did You Know?

What a famous painting reveals about America’s move west.

How the West Was Really Won: From the Editor — Unexpected Heroes

A diversity of men and women brought the gospel to the Wild West at considerable personal sacrifice.

Preparing a Way in the Wilderness

Though history has all but forgotten them, it was Christian preachers and teachers who really tamed the West.

A Church of Their Own

Ethnic congregations were essential for building community in the nation’s most diverse region.

No Rest for the Weary

Tested On All Sides

Excerpts from a wagon train diary reveal that traveling overland was much more than a physical challenge.

Pioneer wives held their households together with a blend of grit and grace.

Diane Severance and others

Traditional Christianity didn’t stand much of a chance in the California gold fields.

One bold Methodist preached outdoors in front of saloons and brothels.

Chronology of key events related to the Christian history of the American west.

Out Yonder, on the Edge of Things

The most controversial, and most effective, missionary to the West and Alaska, Sheldon Jackson was always pushing the boundaries.

The ordeals of a missionary.

Many non- and semi-Christian groups also laid claim to the West, but none more successfully than the Mormons.

The West That Wasn’t Won

The Whitman Massacre reveals much of what was noble and flawed regarding missions to Native Americans.

How the West Was Really Won: A Gallery of Local Heroes

The wide-open West was served, state by state, by brave and sometimes beleaguered ministers and missionaries like these.

How the West Was Really Won: Christian History Interview — Land of Crumbling Myths

Why the twentieth-century West—urban and explosive—ain’t what it used to be.

How the West Was Really Won: Recommended Resources

Resources to learn more about Christianity in the American west.