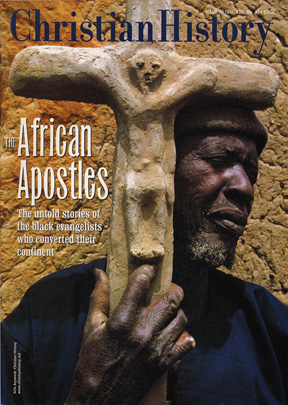 Bishop Before His Time

Samuel Ajayi Crowther’s consecration as the first African Anglican bishop looked like a great leap forward for the church. But the talented ex-slave collided with the roadblock of racism

Anatomy of an Explosion

It’s an indelible image: the white missionary venturing into deepset Africa. But the real story is what happened when African converts relayed the gospel message in their own words.

The Prospect Terrified Me

A Soul of Fire

William Wade Harris - a Liberian activist - left an unsuccessful local ministry to trail across the Ivory Coast. In 18 months, he baptized 100,000 converts.

To Henry Venn, a mission’s only purpose was to render itself unnecessary.

The Brilliant Career of Joseph Kiwanuka

Over the protests of a divided church, the scholarly Ugandan priest became the first African Catholic bishop. Just three years after his death, 12 more Africans would follow in his footsteps.

Holy Johnson and the Ethiopian Church

Ethiopia shall soon stretch out her hands unto God, said the Psalm. Yet racism in the mission churches clouded that vision. James Johnson (1836-1917) offered a solution.

Harris was one of several indigenous Christian leaders who took an open approach to polygamy. They cited social conditions and biblical support.

A Hunger For Holiness

Known for their fidelity to prayer and confrontation with the spirits of indigenous religion, West Africa’s Aladura churches grew from the radical faith of a group of visionary leaders.

A Leopard Among the Bannas

Mahay Choramo faced down hardship and violent opposition to the murderous nomads of Ethiopia’s southern frontier.

The African Apostles: Did You Know?

The rapidity of Africa’s twentieth-century baptism was stunning. There’s no better place to see the future of the global church.

Chronology of Christianity in Africa.

Many are telling the continuing story of the African church. Here are some of the best renditions.