The End has a rather unusual timeline (PDF), actually four different timelines, each of its four diagrams showing the progression of end time events according to a major school of interpretation: Historic Premillennialism, Amillennialism, Dispensationalism, and Postmillennialism. [Mid-tribulationism, post-tribulationism, and pre-wrath rapturism, not shown, are considered variants of Dispensationalism. Africanus’s scheme in which Christ has already fulfilled the first three and a half years of Daniel’s seventh week would be a variant of Historic Premillennialsim.] 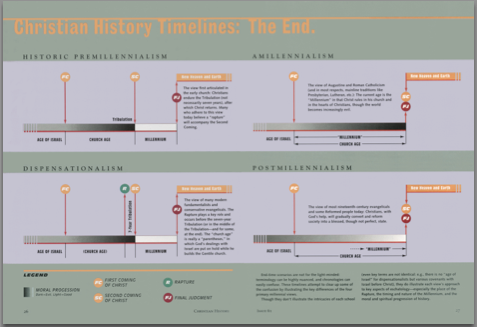 In desperation, Increase turned to prayer.

Plea of a Convicted “Witch”

What a convicted woman had to say for herself.

Captive Faith, Did You Know?

Prisons and prison ministries from the Bible to the present day