Medieval Mystics, Did you know? 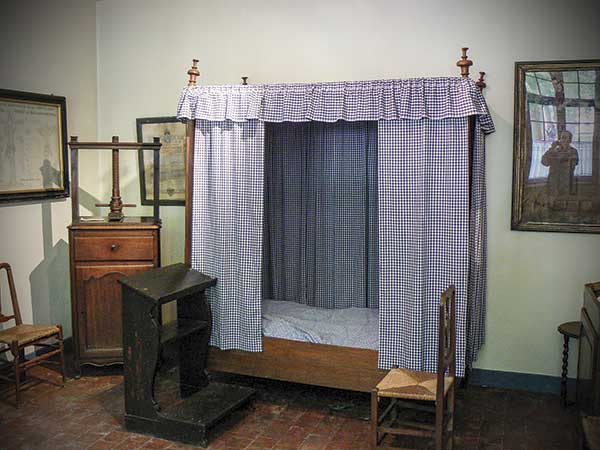 [Some laywomen became Beguines to serve Jesus, living in rooms like this one in Brussels.]

We often think of the Middle Ages as a dry, dead millennium—sandwiched between the enthusiastic piety of the early church and Reformation renewal, and characterized by illiterate priests and poverty-stricken people with little access to the Scriptures. But in the twelfth century, renewal winds began to blow. Read on to find out how.

Whose church is it?

• By the 1200s virtually all Christians lived in a geographically defined parish—an area of land where the priest was responsible for the spiritual welfare of everyone there.

• Wealthy laymen, monasteries, or bishops owned many medieval churches. They appointed the priest, had him ordained, and paid him. Laypeople often brought their offerings to church in material form: bread at Communion; wax, candles, and eggs at Easter; fowls at Christmas.

• The first known morality play, a popular form of drama, came from twelfth-century German abbess Hildegard of Bingen and starred a soul and the devil.

• Julian of Norwich wrote Showings, the first book in English by a woman, around 1395.

• Margery Kempe (c. 1373–c. 1438) dictated the first autobiography in English to her son. In the back of the only known manuscript is a recipe that involves sugar, aniseed, fennel seed, nutmeg, cinnamon and ginger, possibly a cure for her “flux” (dysentery).

Hot off the presses

• Thomas à Kempis’s The Imitation of Christ was hand-copied so often that over 700 manuscripts exist today. One of the earliest printed books (1471), over 100 different printed editions existed by 1500.

• The first Bibles translated from Latin came from the Reformation, right? Wrong! In the thirteenth century, the church allowed limited translations for personal use—although it often rebuffed the resulting calls for reform.

The Niña, the Printer, and the friars

Did you know Christopher Columbus (1451–1506) was a Franciscan? As a “tertiary” he followed part of their rule of life while living “in the world.” Printer Johannes Gutenberg (d. 1468) may have been one as well.

Later two mystics helped end the papacy’s 70-year exile in France. In the 1350s Bridget of Sweden strongly urged Clement VI to leave Avignon for Rome, and in 1376 Catherine of Siena wrote to Gregory XI:

Why not give your life a thousand times, if necessary, for God’s honor and the salvation of his creatures? That is what he did, and you, his vicar, ought to be carrying on his work. It is to be expected that as long as you are his vicar you will follow your Lord’s ways and example.

Our readers and editors

Scholars agree that around the twelfth century, a variety of forces led to a renewal of lay faith.