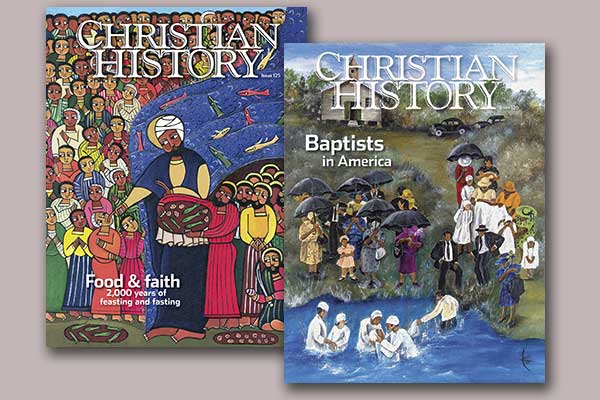 from medieval faith to prison faith

Before the fourteenth century there was essentially no such thing as having a personal Bible. How did people know God’s word? How did they become believers? What was the level of spirituality in the millennium between Constantine and Luther? What influence did wars and plagues have on personal faith in Christ? Was there sufficient literacy to support any sort of Christian literature ​. . . hand-scribed though it had to be? I’d love to read Christian History’s take on this. Of course I know that your topics are already selected for the next however long, but I’m only 74 and can wait . . . for a while. —Arne Tiegland

We told Arne that his timing was actually perfect, as this issue addresses many of these topics. To learn more about medieval approaches to faith, you can also read issues #30 (Women in the Medieval Church) and #49 (Everyday Faith in the Middle Ages) and our guide The History of Worship from Constantine to the Reformation. As for Arne, he responded with another note:

I am just now finishing issue #123 [Captive Faith]. I help out at a weekly Bible study at our county jail and will order a copy for its library as well as one for our leader and one for my attorney son. I can’t imagine how you keep going on a donation basis. So I end with a prayer for your continued financial health. You are laborers most worthy of your hire.—Arne Tiegland

For more on faith in prison, check out http://www.captivefaith.org/ and issue #123.

Including all the Baptists

Although your current issue on Baptists is very fine, providing valuable historical developments, it is sadly lacking on the current status of Baptists that were the divisions of the theological wars of the period from the 1920s to the 1940s. My book The Twelve Baptist Tribes in the USA (2007) describes 53 distinct Baptist bodies in the USA and places them in 12 groups. . . .

Today the American Baptist Convention is the dominant Baptist body only in New England and the Middle Atlantic when at one time it dominated from Maine to California outside the South. Why don’t you include the current status of Primitive Baptists, Landmark Baptists, Free Will Baptists, etc.?—Albert Wardin, Nashville, TN

As with all of our issues on specific denominations and movements, we wrestle with how to condense centuries of history into 48 pages. We commend Dr. Wardin’s book, published by the Baptist History and Heritage Society, and his other works, all of which explore the whole range of Baptist witness in the US.

In addition, I gave extra copies of the Reformation timeline out to the class participants; everyone agreed they were very helpful and professionally done. I just wanted to say a big thank-you for all your hard work on both the video series and the magazines. May God continue to bless your efforts.

I recently taught an 8-week adult Sunday School class on the Reformation using issues #115, #118, #120, and the DVD This Changed Everything. Within the next year I hope to teach Perspectives on the World Christian Movement, as well as a course on the history of evangelicalism. Looking forward to using more of your magazines.

Any future DVD’s coming out like This Changed Everything? It was outstanding. . . . I’ve been a fan of your magazine from the beginning. Thank you for all that you do.—Larry Kendrick, Chester, CA

We are working on a follow-up DVD tentatively titled Christian Unity: A New Way Forward. It will explore this controversial subject from a historical and biblical basis through interviews with experts and stories of how Christians around the world are promoting unity through love in action.

Sandy Williams, pastor emeritus of the First Baptist Church of Freeport, Maine, reminded us that Helen Barrett Montgomery, featured in issue 126, was the first woman president of the Northern Baptist Convention, not the National Baptist Convention (p. 36). Thanks, Sandy!

By Our readers and editors

Scholars agree that around the twelfth century, a variety of forces led to a renewal of lay faith.