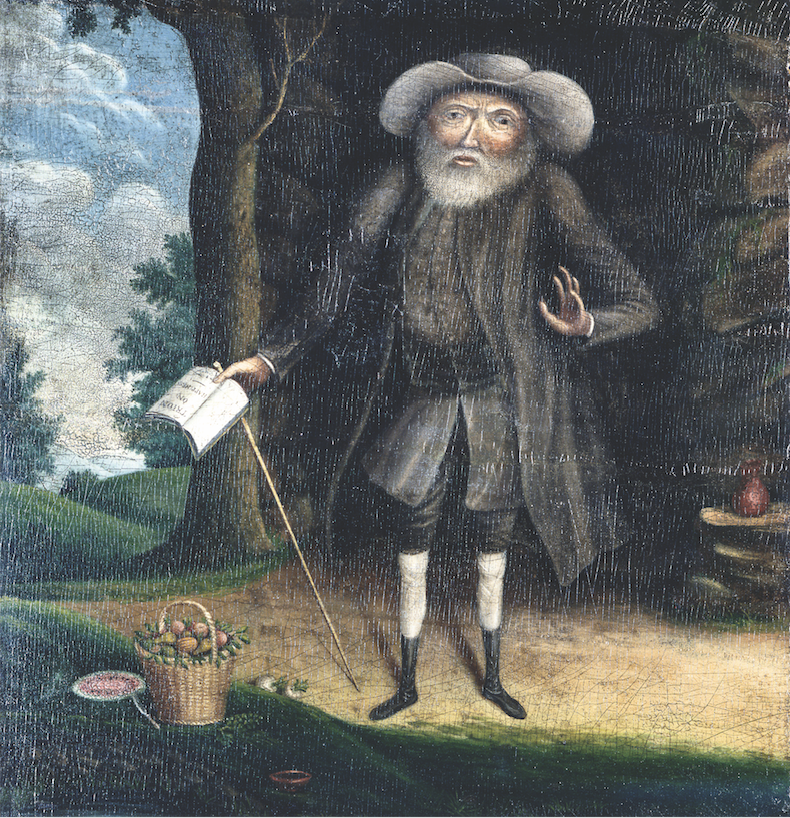 In 1738 Benjamin Lay (1682–1759) walked into the Yearly Meeting of the Philadelphia Society of Friends wearing a plain coat and carrying what appeared to be a Bible. It was actually a hollowed-out book, which concealed a pig’s bladder full of red-dyed liquid. An adamant abolitionist, Lay was known for performing freakish or terrifying stunts to draw the attention of his fellow Quakers to the plight of enslaved people.

He once kidnapped a child from a Quaker family to demonstrate how slaves felt when their children were torn away from them, and another time he stood outside in the snow in his bare feet to illustrate the suffering and poverty they were forced to endure. Now he had something special planned for the peace-loving Quakers attending the Philadelphia Yearly Meeting in 1738.

As the delegates discussed the business of the society, Lay rose to speak. Witnesses report that he said, “Oh all you Negro masters who are contentedly holding your fellow creatures in a state of slavery . . . you might as well throw off the plain coat as I do.” At this point Lay threw off his coat to reveal full military uniform, including a sword (shocking to pacifist Quakers). He continued, “It would be as justifiable in the sight of the Almighty . . . if you should thrust a sword through their hearts as I do this book!” Lay drew his sword and stabbed the “Bible” he carried, causing what appeared to be blood to gush forth.

Not surprisingly Lay was hustled out, and the Philadelphia Quakers immediately disowned any relationship with him and made it known that he did not speak for or represent them. Lay was a man ahead of his time, but his odd and prophetic life paved the way for the Society of Friends to become one of the very few North American Christian denominations able to purge slavery from its midst, both in the North and the South, and advocate for the liberty of Black Americans.

No wills for you

John Woolman (1720–1772) was born a generation after Benjamin Lay. Although his spirit and demeanor were gentler than Lay’s—fitting well with the Quaker commitment to pacifism—he was no less zealous in his opposition to slavery or his desire to see it banished from the Society of Friends. Woolman’s genius lay in his willingness to use everyday economic exchanges and systems to protest slavery. For example, he earned his living in part by acting as a public notary. In this capacity he was often called upon to write wills, but he refused to author any document that treated human beings as property, explaining to his fellow Quakers “in a friendly way that I could not write any instruments by which my fellow-creatures were made slaves.”

When he stayed at the houses of slaveholding Quakers during his itinerant ministry, he insisted on paying the enslaved people for their work on his behalf. Woolman also refused to buy or sell goods produced through slave labor, even when this put a fairly severe crimp in his own lifestyle. These economic actions, paired with his humble yet firm demeanor, were the needed catalyst for the society to finally ban slavery within its own ranks and disown members who refused to set their slaves free.

Once these steps were incorporated into church discipline, Friends quickly learned that emancipating their slaves was easier said than done. Neither Virginia nor North Carolina wanted free Blacks living within their borders, and they had already made it illegal to free enslaved people. In Virginia a law written in 1723 and reaffirmed in 1748 stated that no slave could be set free except in very precise circumstances: if enslaved people were set free contrary to this law, “it was the duty of the church-wardens to sell them and apply the money to parish uses.” North Carolina adopted this law in 1741 and reaffirmed it in 1777 as “An Act to Prevent Domestic Insurrections and for Other Purposes.”

That year a committee reported to the North Carolina Yearly Meeting of Friends that a great willingness existed among Friends to emancipate their slaves, but about 40 free Black people had been captured and resold according to the law. The committee recommended that North Carolina Quakers temporarily cease freeing their slaves while they looked for a solution to the legal issues. They had two major goals: to clear slavery from their own ranks and to secure the permanent liberty of those who had been freed. Given state law it was the second goal that made the first hard to achieve. North Carolina Friends decided to attack the problem from two fronts—the courtroom and the marketplace.

They brought many suits and appeals against the 1777 law and others that followed it, but their attempt to work through the courts was essentially a failure. In fact the laws against freeing enslaved people generally grew more severe, culminating in an 1830 law that not only obligated slaveholders to get a license from the superior court to free their slaves, but also required them to post a bond of $1,000 for each one freed. Any person freed without meeting both requirements was subject to capture and resale.

The Quakers’ marketplace solution was far more successful. In 1796 North Carolina passed a law that allowed religious societies to appoint trustees to purchase real estate for their society and to receive and oversee donations of any amount and of any kind—including slaves. The Yearly Meeting saw in this law a way to meet their goals. In 1808 they established a committee “to have under care all suffering cases of people of color.” The committee would be the society’s appointed trustees who could receive “donations” of enslaved people, from Friends who wished to emancipate them. Thus the North Carolina Yearly Meeting became a slaveholder; but in doing so, made it possible for individual Quakers to be free from the sin of slaveholding while still protecting the Black people who had been set free.

There was some initial hesitation regarding this plan, but it appears a consensus formed quickly. In 1814 more than 350 enslaved people were “taken under care” by the committee. In 1822 a John Kennedy gave 36 slaves to the committee, a Joseph Borden gave 18, and the heirs of one Thomas Outlaw gave 59. At that point the North Carolina Society of Friends legally owned 450 formerly enslaved people. This ingenious scheme was even recognized by non-Quakers, some of whom tried to emancipate their slaves by giving them to the North Carolina Yearly Meeting.

The ultimate goal of the Yearly Meeting was to help settle formerly enslaved people within free states or countries. Yearly reports demonstrate their success. In 1826 the North Carolina Yearly Meeting had about 600 Black people under care. Of these, 316 decided to go to Liberia; 101 to the western territories of the United States; 15 to Philadelphia; and 99 wanted to stay in North Carolina. (Involvement in lawsuits prevented the immediate emigration of 78.) An 1830 report states that the committee transported 652 formerly enslaved people to free states or countries at a cost of $12,769.51. Reports continue until at least 1856, and it is likely that the process continued until the Emancipation Proclamation.

Knowing how to steer

The Quakers’ dual commitment to liberty and pacifism required that they seek out innovative responses to the system of slavery. In the economic laws of North Carolina, they found an opportunity to use the marketplace and their own resources to accomplish that goal without violating their conscience.

Woolman had once written, “If [we] set aside all self-interest, and come to be weaned from the desire of getting estates, or even from holding them together, when truth requires the contrary, I believe the way will so open that [we] will know how to steer through those difficulties.” He trusted that if Christians truly humbled themselves and their own desires, God would show them ways to successfully oppose slavery and its attendant evils. The North Carolina Quakers are proof he was not wrong. CH

Christina Hitchcock is professor of theology at the University of Sioux Falls and author of The Significance of Singleness.