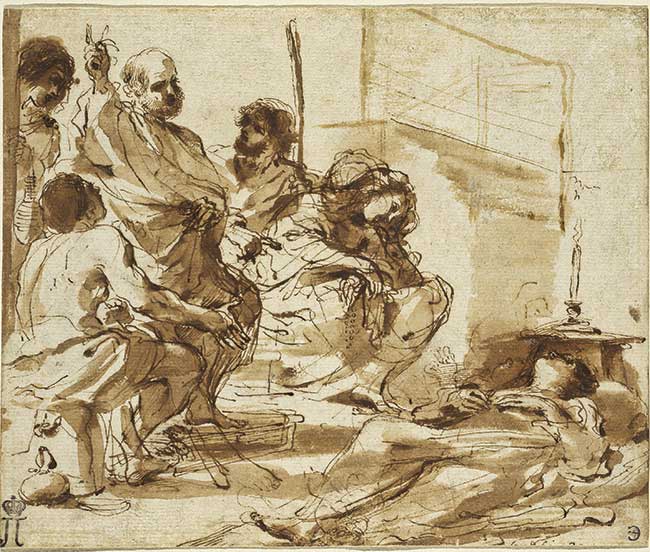 Roman roads, public baths and gymnasiums, Hellenistic high culture, the beginnings of democracy, the military muscle to ensure peace—the Roman Empire in the second century after Christ looked like a golden age. For the healthy, perhaps it was. But woe unto you if you got sick. Then the shining Roman city showed its dark underbelly. Mercy was discouraged as it only helped those too weak to contribute to society.

In the cramped, unsanitary streets, under the miserable cycle of plagues and famines, the sick found no public institutions dedicated to their care and little in the way of sympathy or help. Perhaps a family member would come to their aid, but sometimes even close relatives would leave their own to die.

Many people began moving from the countryside to the city in search of jobs and amenities. Once in the cities, however, migrants found themselves living in tenement buildings lacking basic sanitary facilities. Support of family and village now gone, they eked out an often-lonely urban existence. In the face of daily alienation or times of trouble, they could expect no social support beyond occasional free grain and entertainment such as gladiatorial games (“bread and circuses”).

Worse still, should they sicken, no clinics or hospitals existed to provide healing or even basic nursing care. True, one could find physicians. But their fees were too steep for most. Some towns did hire a public physician, but institutional health care was unheard of. Commoners were left to rely on folk healers and sellers of herbs, amulets, and quack remedies.

The classical world possessed no religious or philosophical basis for the concept of the divine dignity of human persons; without such support, the right to live was granted or withheld by family or society almost at a whim. As a result the chronically ill could be seen everywhere in streets, baths, and forums—many of them homeless and begging.

Some turned to the temples of gods, such as Isis and Serapis, who were believed to heal supernaturally. Most famous of these gods was Asclepius, worshiped in hundreds of temples and shrines throughout the Roman Empire. The sick would come as pilgrims to the temples; those who came most often were either suffering from chronic or hopeless diseases or were very poor. Some were healed, according to temple inscriptions. By the second century AD, physicians were available at some temples to offer advice on medical regimens. But long-term medical care was not provided. In fact the dying were not allowed in the temple precincts, because their death would pollute the sanctuary.

During the first century AD, a new culture began penetrating the classical Roman world: that of the Christians. Palestine couldn’t hold the new faith long, and within a century, it was spreading rapidly across the empire even while targeted by national persecution. During this time, in spite of great danger to themselves, churches carried on an active ministry of philanthropy that included the care of the sick.

Christian medical philanthropy found its basis in the biblical concept of the imago Dei, the belief that human beings are created in God’s image (Genesis 1:26–27), and thus that human life is precious and must be protected. The imago Dei provided the foundation for the Hebrew concept of human personhood, and the Torah forbade certain practices common among other ancient Near Eastern societies: child sacrifice, exposure of infants, infanticide, and castration.

In the New Testament, the doctrine of the Incarnation (John 1:14) extended and deepened these implications. Early Christians believed that the motivation for charity should be God’s self-giving love (agape), which reflected his nature (1 John 4:8). God loved the human race enough to send Christ in human flesh to die on a cross for our sins (John 3:16). Christians responded by demonstrating Christ’s love to their brothers and sisters, who bore God’s image (John 13:34–35). The weaker and more helpless the neighbors, the greater the need to show them the compassion of Christ; hence they had special concern for unborn and newborn life.

This sort of practical morality departed radically from the social ethics of classical paganism. The pagan ideal of philanthropia (“love of humankind”) not only did not provide an impulse for private charity, it actively discouraged it. In Greek and Roman society, beneficence (providing assistance to the needy) existed only on the community level as civic philanthropy exercised by rulers and the wealthy on behalf of the entire community, rich and poor alike. The Roman worldview provided no motivation to found charitable institutions. By contrast, God’s love demanded that Christians demonstrate his love to others, especially the unlovely.

Christian theology birthed personal and corporate charity surpassing any previously known. Church leaders encouraged all Christians to visit the sick and help the poor, and each congregation also established an organized ministry of mercy. Presbyters (priests) and deacons added benevolent ministry to their sacramental roles. Priests collected alms each Sunday; deacons distributed them. Widows and deaconesses provided a ministry of mercy to women.

By the third century, the number of those receiving aid from the hands of the church had grown considerably, especially in large cities. Congregations created additional minor clerical orders, such as subdeacons and acolytes, to assist in liturgy and benevolence.

In 251 Cornelius, bishop of Rome, wrote to Fabius, bishop of Antioch, reporting that the church in Rome in that year supported 46 priests, 7 deacons, 7 subdeacons, 42 acolytes, and 52 exorcists, readers, and doorkeepers! Altogether the church in Rome ministered to 1,500 widows and others in need. Each year it spent an estimated 500,000 to 1,000,000 sesterces (a sesterce was worth perhaps one of today’s US dollars)—on benevolent work. This program of benevolent care soon expanded, owing to an unfortunate cause.

One devastating epidemic began in 250 and spread from Ethiopia across North Africa, then to Italy and the western empire. It lasted 15 to 20 years, and at one point in Rome, 5,000 people died in one day. Beyond offering supplications to the gods for relief, public officials did nothing to prevent the spread of the disease, treat the sick, or even bury the dead. Romans believed that nothing effective could be done in a time of plague other than appeasing the gods.

By 251 the plague had swept into Carthage in North Africa. Piles of dead bodies rotted in the streets, abandoned by their families. Leaders casting about for causes scapegoated Christians, and a severe empire wide persecution erupted. Emperor Decius ordered all Christians to sacrifice to the gods on pain of death.

Carthage’s bishop, Cyprian, enjoined the city’s Christians to give aid to their persecutors and to care for the sick. He urged the rich to donate funds and the poor to volunteer for relief efforts, making no distinction between believers and pagans. Under Cyprian’s direction Christians buried the dead left in the streets and cared for the sick and dying. For five years he stood in the breach, organizing relief efforts, until he was forced into exile.

The plague of Cyprian, as it has come to be called, marked a new chapter in early Christian medical charity. For the first time, Christians extended their medical care to pagans as well as fellow Christians. To provide even basic care for large numbers of the sick, Cyprian probably hired unemployed men to carry out work that had grown beyond the resources of Christian volunteers. These may have included grave diggers and perhaps an ambulance corps.

Much later, in Alexandria, Egypt, in about 416, the Christian patriarch of that city organized a corps of men recruited from the poor classes to transport and nurse the sick. They were called the parabalani, the “reckless ones,” because they risked their lives by exposing themselves to contagion while assisting the sick. We know that in 312, during a widespread plague, Christians in many Eastern cities were performing similar tasks.

Such large-scale organized emergency efforts did not emerge from nowhere; they came from the existing infrastructure in Christian churches to help the sick. The deacon-led care that the churches offered the sick was usually palliative, because it was administered for the most part by people with little or no medical training or experience. But we know today that in the absence of professional expertise and even medications, a basic regimen of nursing care can cut mortality during epidemics by two-thirds or even more.

Christianity did not promise the miraculous healing that the cult of Asclepius did (though healings in Jesus’s name were reported throughout the ancient period). But the church regularly provided something less spectacular and more predictable: compassionate care of the sick and dying.

In the early fourth century, lay Christian orders began to appear in the large cities of the eastern empire: the spoudaioi (“the zealous ones”) and (in Egypt) the philoponoi (“lovers of labor”). The mission of these groups, drawn mostly from the lower classes, was to reach out to the indigent sick in cities such as Alexandria and Antioch. These cities had large populations of homeless people who were sick and dying on the streets.

The philoponoi distributed food and money to them and took them to the public baths, where their basic hygienic needs could be met and they could find warmth in winter. None had medical training, but they were motivated by compassion. Over time they became an intermediate order between clerics and lay people. In the sixth and seventh centuries, they became attached to large churches and continued the long tradition of church-centered, deacon-led care of the sick.

Many movements in the history of Christian philanthropy have drawn on this legacy. Roman Catholics have excelled in organizing and institutionalizing medical charities, including hospitals, most maintained by female religious orders such as the Sisters of Charity, founded by St. Vincent de Paul (1580–1660).

In the nineteenth century in Holland, a Mennonite deaconess movement cared for the ill, and in England, the Quaker Elizabeth Fry revolutionized care for prisoners and the sick. Taking cues from both, pastors Theodore Fliedner and Wilhelm Loehe pioneered in their native Germany a Lutheran deaconess movement that spread throughout Europe. Among trainees at the movement’s base in Kaiserswerth was the famous Florence Nightingale, who took what she learned there to England, where she founded a school of nursing.

Prominent historian of medicine Henry Sigerist wrote that Christianity introduced the “most revolutionary and decisive change in the attitude of society toward the sick,” giving sick people a “preferential position” in society that they retain to this day. Christians saw the suffering of others as an opportunity to provide compassionate care in the name of Christ. This was Christianity’s novel contribution to health care, providing the foundation for the whole tradition of Western medical philanthropy. By the fourth century, it led to the creation of the hospital as a uniquely Christian institution. But the hospital would never have succeeded without the medical philanthropy integral to the ministry of the early church. CH

Gary B. Ferngren is professor of history at Oregon State University. A longer version of this article appeared in CH 101 (2011) under the title “A new era in Roman healthcare.”