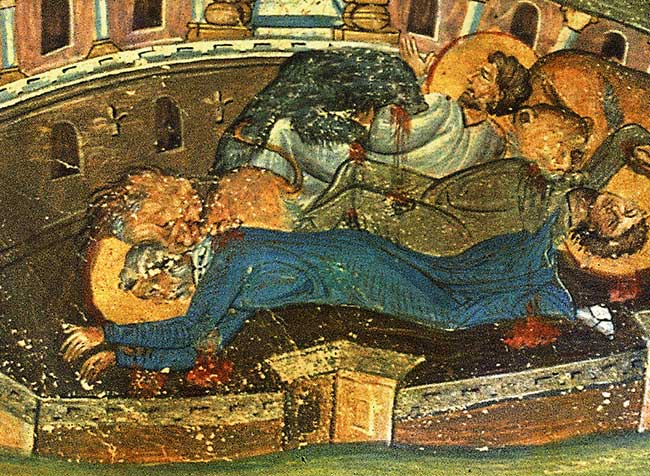 The Roman world in the early Christian era was frequently troubled by plagues; the most famous and destructive broke out in AD 249 and lasted 21 years. Epidemics of plague are reported in a number of cities in the second through fourth centuries. In at least some cases, Roman troops brought back diseases when returning from far-flung military campaigns. Some may have been versions of smallpox or measles.

Frequently Romans consulted the shrines and oracles of their gods in efforts to learn what would stop the plagues. Some shrines, like the one to Apollo at Didyma [in modern-day Turkey], were established to thank a god for saving a city from plague. Things that terrified the populace, says historian Robin Lane Fox, made “excellent business for Apollo.”

Refusing to appease the gods

Many in the empire cast blame upon Christians for causing epidemics because they refused to do pious acts appeasing the gods. Tertullian famously wrote (around 196) in his Apology: “If the Tiber rises as high as the city walls, if the Nile does not send its waters up over the fields, if the heavens give no rain, if there is an earthquake, if there is famine or pestilence, straightway the cry is, ‘Away with the Christians to the lion!’” Around 250 Porphyry blamed a plague in Rome on citizens having abandoned the temple of Asclepius, the god of medicine and healing, to seek healing in Christian churches.

Eusebius reported on a plague during the reign of Emperor Maximinius II (305–313):

A great rural population [was] almost entirely wiped out; nearly all being speedily destroyed by famine and pestilence . . . Some, chewing wisps of hay and recklessly eating noxious herbs, undermined and ruined their constitutions. And some of the high-born women in the cities, driven by want to shameful extremities, went forth into the market-places to beg.

But in the crisis, the Christians knew what to do. Eusebius proudly told of his fellow believers’ response:

Then did the evidences of the universal zeal and piety of the Christians become manifest to all the heathen. For they alone in the midst of such ills showed their sympathy and humanity by their deeds. Every day some continued caring for and burying the dead, for there were multitudes who had no one to care for them; others collected in one place those who were afflicted by the famine, throughout the entire city, and gave bread to them all.

Chris Armstrong, senior editor at Christian History. Published under the title “Who you gonna call?” in CH #101 (2011).