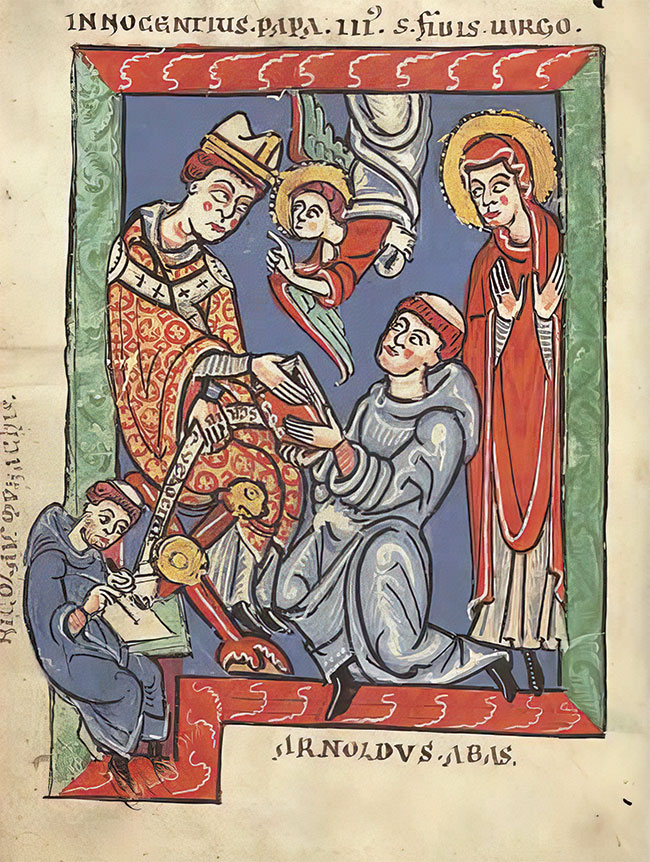 —58 Mark is credited with organizing the church of Alexandria.

—203 Felicity and Perpetua are martyred.

—233–256 A house is converted for worship in Dura Europos, the earliest house church excavated.

—313 Constantine and Licinius issue the Edict of Milan.

—c. 320 Pakhom (Pachomius) establishes a communal form of monasticism in the deserts of Egypt.

—325 First Council of Nicaea is held.

—c. 340–397 Mosaic of Ambrose is made in the Milan church of St. Ambrogio, probably from life.

—340 Shapur II of Persia launches a persecution against Christians.

—356 Athanasius writes the Life of Antony.

—358 Basil the Great founds a monastery in Cappadocia.

—367 Athanasius writes a letter that formalizes the New Testament canon.

—370 Ulfilas completes translation of the Bible from Greek into Gothic.

—381 First Council of Constantinople is held.

—433 Patrick lights a fire on the Hill of Slane, prompting Irish conversion.

—451 The Council of Chalcedon is held.

—635 Alopen, a Syrian or Persian Christian, arrives in the capital of Tang China. Irish missionary-monk Aidan of Lindisfarne arrives in Northumbria, leading to the conversion of the Anglo-Saxons.

—663 The Synod of Whitby aligns the English church with Rome.

—732 At the Battle of Tours, the Frankish general Charles Martel halts a Muslim invasion.

—780 The “Nestorian Stele” is erected near Xi’an telling the story of 150 years of Christianity in China.

—780 Timothy I of Baghdad becomes Catholicos of the Church of the East.

—863 Cyril and Methodius are invited to share the gospel in Great Moravia.

—910 The monastery at Cluny is founded, beginning a reform movement.

—1054 The East-West (Greek-Latin) Schism is formalized through mutual excommunications.

—1093 Anselm is named archbishop of Canterbury.

—1115 Bernard founds a monastery at Clairvaux.

—1136 Nun, writer, and composer Hildegard of Bingen is elected mother superior of her convent.

—1181 King Lalibela is enthroned as emperor of Ethiopia. His people will build beautiful churches during his reign.

—1223 Influenced by the Franciscans, Elizabeth of Hungary begins charitable works.

—1373 Julian of Norwich receives the visions that prompt her work Showings.

—1377–1378 Catherine of Siena writes The Dialogue of Divine Providence.

—1453 Constantinople falls to Sultan Mehmed II of the Ottoman Empire.

—1514 Bartolomé de las Casas, priest and colonist, has a change of heart regarding indigenous slavery; he later publishes A Short Account of the Destruction of the Indies.

—1521 At the Diet of Worms, Luther refuses to recant his ideas.

—1527 A group of Swiss Anabaptists produces the Schleitheim Confession.

—1529 At the Colloquy of Marburg, Zwingli and Luther cannot reach agreement in their views on the Eucharist.

—1534 The Act of Supremacy establishes the king as the head of the church in England.

—1549 The first Book of Common Prayer is published.

—1590 The dome of Saint Peter’s Basilica is finished.

—1611 The Authorized Version, or King James Bible, is published.

—1738 John and Charles Wesley have profound spiritual experiences that spark the Methodist movement.

—1792 William Carey publishes An Enquiry into the Obligations of Christians to Use Means for the Conversion of the Heathens.

—1795 The London Missionary Society is founded.

—1807 Parliament forbids the slave trade in the British Empire—the result, in part, of Christian activism for abolition.

—1833 John Keble preaches the sermon “National Apostasy,” considered to be the beginning of the Oxford Movement.

—1885 Executions of a number of Catholics and Anglicans, later honored as martyrs, begin in Uganda.

—1905 Revival breaks out at Pandita Ramabai’s Mukti Mission in India.

—1906 The revival sparking the Pentecostal movement breaks out at Azusa Street in California.

—1907 Inspired by the Welsh Revival and other movements, revival breaks out in Pyongyang, Korea.

—1929 Revival begins in what is now Rwanda and spreads for over two decades.

—1957 Martin Luther King Jr. gives the opening prayer at a Billy Graham crusade, the beginning of a friendship between the two influential ministers.