The Slavic kingdoms in what are now Poland, Hungary, Slovakia, Ukraine, Romania, and the Czech Republic united as the realm of Great Moravia in the mid-9th century. While Latin missions had been present in the area for years, Moravian king Ratislav requested that the Byzantine emperor send teachers who could instruct his people in the Bible and church liturgy. Methodius had already been a mayor, a monk, a philosophy professor, a cultural advisor, and an archivist when he agreed to disciple the Slavs with his brother Cyril in 863. They arrived in Moravia equipped with Scriptures rewritten in a new alphabet system devised by Cyril that phonetically represented the Slavic languages. Cyril and Methodius are pictured (left, 19th-c. icon) holding a prayer book and a diagram of the Cyrillic alphabet, still used today. Some corners of Moravia met the Slavic liturgy with uproar, but the pope and the patriarch of Constantinople jointly blessed it. A Moravian cross (center, 9th c.) shows Eastern artistic influence. Later, in 910, Cluny Abbey in France (right) exemplified monastic reform through strict adherence to the Rule of St. Benedict.

The 11th-c. Vyshgorod Icon of Mary Theotokos (left) is one of the most famous in Russian and Ukrainian Orthodoxy. But Christianity was new in Kievan Rus’ only the century before. The King of the Rus’, Vladimir I, ruling from Kyiv, was a committed pagan, but he sensed that adopting a monotheistic religion would consolidate his power. Baptism would also finalize an alliance with Constantinople and his marriage to a Byzantine princess. The only choice left was whether to follow the Western or the Eastern tradition. The painting (center left 19th c.) dramatizes Vladimir’s decision in 988: surrounded by fur-clad hunters and armored mercenaries, Vladimir sits in the shadow of paganism while a bearded Orthodox priest opens a Greek prayer book for him. Clean-shaven Catholics dressed as the pope, a cardinal, and a priest with Roman laurels, leave the party, dismayed at Vladimir’s pick. Vladimir had sent out emissaries to witness the competing liturgical practices, and they were so spellbound by Hagia Sophia’s beauty (p. 34) that they helped sway the king’s choice of Eastern Christianity. Vladimir, along with his sons Boris and Gleb (right, 17th-c. icon), became saints in the Russian and Ukrainian Orthodox Churches. A Kievan Rus’ coin from the time of Vladimir (center right) shows him holding a cross-shaped scepter.

The rich Christian tradition of Nubia is apparent in its cathedral wall paintings. Nubian archers, named “eyesmiters” for their deadly aim, helped the kingdom ward off Islamic invasions from Egypt, its northern neighbor. In its capital city of Faras stood a cathedral decorated with wall paintings of Christ and Mary giving authority to the Nubian king and of the apostle Peter investing Bishop Petros with episcopal authority (left, mid-11th c.). The striking image shows Peter, rendered as a fair-skinned northerner, cross-culturally passing church authority to Petros, clearly Nubian not only by his dark skin, but also his mustache characteristic of Nubian culture. Medieval Christianity was shown here as connected not only to realms and rulers, but also to Jesus himself through apostolic succession. Indeed, at the close of the first millennium, the vast array of Christian cultures displayed a surprising artistic unity, as seen in these 10th-c. ivory reliefs (clockwise from top right): a Crucifixion from Ottonian Germany; the Italian cover of a Gospel book; a virgin and child made in Constantinople; an enthroned Christ draped in Anglo-Saxon robes and carved from walrus ivory; a Byzantine Crucifixion scene in which the cross’s base has stabbed Hades, god of the underworld; and a Coptic Christ carved on the outside of a tusk. 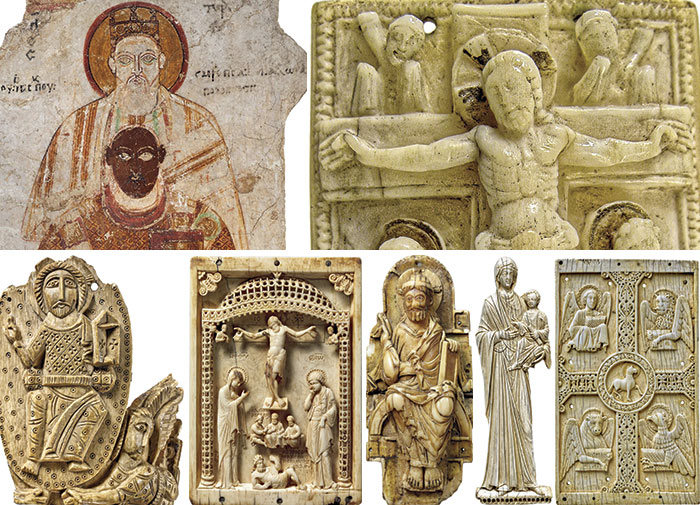 Iceland formally adopted Christianity in 1000. The island was home to an early democratic parliament, the Althing, which was divided over whether to adopt new Christian or old pagan laws. The decision came down to Thorgeir, the pagan legal representative who worshiped Icelandic idols such as Thor (left, bronze idol c. 1000). Legend has it that the wise old leader retreated to his estate to contemplate the decision. There, the gospel message hit home. Dragging his idols to the edge of a neighboring waterfall, he pitched them into the raging water below to embody his new allegiance to Jesus. The site is still called Godafoss, “fall of the gods” (center left). At Thorgier’s conversion the Althing outlawed public pagan sacrifices and built a church at its meeting ground, Thingvellir (center right). Thorgeirskirkja, “Thorgeir’s Church” (right), was built overlooking Godafoss in 2000 to commemorate 1,000 years of Christianity in Iceland.