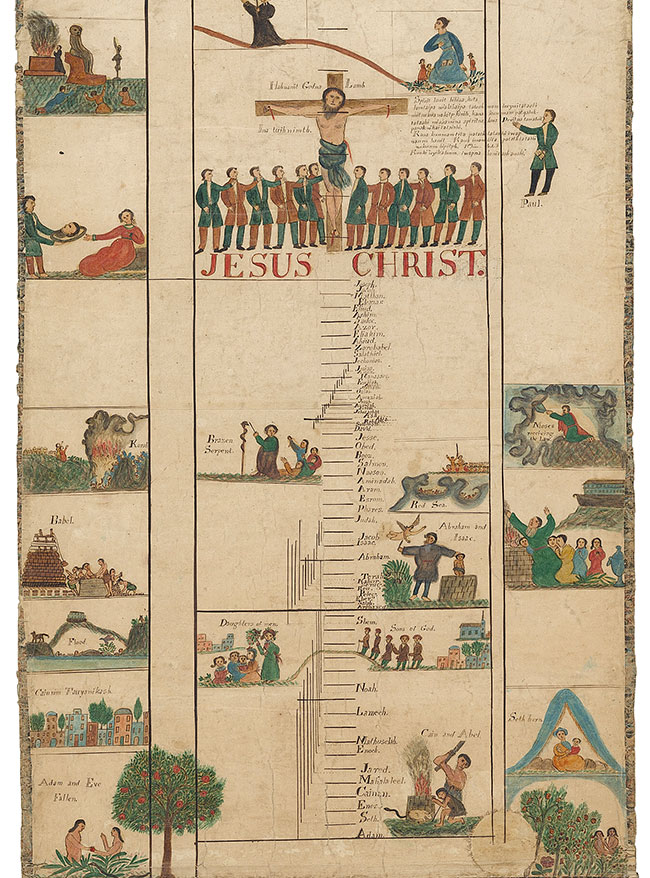 Colonial missionaries recognized early on the necessity of publishing God’s Word in the languages of North American indigenous peoples, empowering them to find their unique place in God’s universal story of salvation. These translation efforts followed four paths.

Awakening to the need: John Eliot (1604–1690). Eliot (see p. 36) served 60 years as pastor at First Church, Roxbury, Massachusetts. Shepherding his immigrant flock, and moved by Wampanoag needs, he seriously studied the native language. Aided by Cockenoe—a Montaukett man captured by English settlers—he translated first the Ten Commandments and the Lord’s Prayer into Wampanoag and later produced the first full Bible, in Wampanoag, printed in the Western Hemisphere. The Christian “praying Indians” organized into Algonquian towns that thrived until the upheavals of King Philip’s War (1675).

Sent to translate: Alfred (1788–1853) and Harriet (1779–1863) Wright. Alfred Wright first trained in medicine, then sensed God’s call as preacher-educator. Sent by the American Board of Commissioners for Foreign Missions (ABCFM) to the Chocktaw in Mississippi, he married Harriet Bunce in 1825. They loved the people, learned the language, and moved with the tribe to Oklahoma on the 1832 Trail of Tears; the hymnal and spelling book they produced were among the first texts printed in Chocktaw. Alfred also translated the New Testament and portions of the Old, and Wright’s colleagues published the entire Bible in 1886.

A Native bilingual word: Henry `Ōpūkaha`ia (c. 1792–1818). `Ōpū-kaha`ia (he later adopted the English name Henry) was from Hawai`i, the “Big Island” of the island nation. When he was 10, his family was murdered in intertribal warfare. Fleeing the islands he began learning English while sailing to New Haven, Connecticut. There, members of the Dwight family, closely tied to Yale University, arranged tutoring for him, and he came to faith in 1815 during the Second Great Awakening. As a result of his and others’ desires to return to Hawai`i to spread the gospel, the ABCFM founded a school. `Ōpūkaha`ia worked on a Hawaiian grammar and dictionary and then began a translation of Genesis, but never made it home, dying of typhoid in 1818. His legacy inspired the 1820 ABCFM mission to Hawai`i.

Picturing God’s story: Catholic and Protestant ladders (1830s–1840s). Pioneer settlement in Oregon Territory included missionaries. Sensing urgency in spreading the gospel message, in 1839 Canadian priest François Blanchet (1795–1883) carved into a stick ascending biblical and theological symbols to represent creation, then Christ, then the Roman Catholic Church; he later crafted a similar visual “ladder text” on paper. Presbyterians Henry Spalding (1803–1874) and Eliza Hart Spalding (1807–1851)—who worked among the Nimíipuu—created a more pictorial ladder with English notes; unlike Blanchet’s it did not show Protestants as a withered branch.

The Bible for the church

Use these questions on your own or in a group to reflect on how the Bible has formed you and your church.