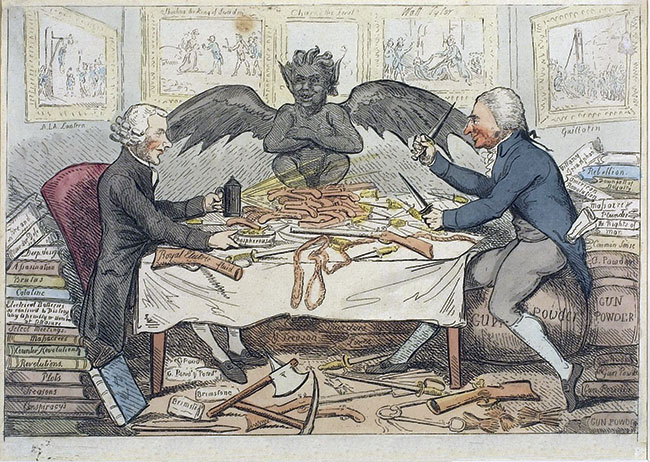 [Isaac Cruikshanik, Sedition, levelling and plundering; or, the pretended friends of the people in council, 1792. Hand Colored etching.—[CC BY-NC-SA 4.0] © The Trustees of the British Museum]

By the early twentieth century, it seemed the Bible was in trouble. Civil history, geology, paleontology, biblical criticism, evolutionary biology, and anthropology offered powerful alternative explanations of the world and humanity’s place in it. Three possible responses arose—to abandon the Bible altogether as an authoritative source for knowledge about the world, to attempt to reconcile science and scholarship with the Bible, or to reject anything that seems to compromise the Bible’s authority.

These trends touched America, but they had begun much earlier with English deists of the seventeenth century such as Edward, Lord Herbert of Cherbury (1583–1648), and Conyers Middleton (1683–1750). They vehemently protested the established church, condemning revealed religion in general and Christianity in particular. German thinkers built on these foundations.

At the end of the eighteenth century, Immanuel Kant (1724–1804) declared his age “an age of criticism” and called readers to reject the authority of the church and the Bible. Kant embodied the spirit of the Enlightenment in Germany. At first many philosophers still proclaimed orthodoxy while exalting reason, rather than church authority or tradition, as the final arbiter of truth.

But soon this dependence on reason reached beyond orthodoxy. German dramatist Gotthold Ephraim Lessing (1729–1781) believed the “true Christian” remains safe by depending on “inner truth” rather than “written traditions” and was deeply troubled by the idea that transcendent revelation could cross the “ugly broad ditch” of history into human experience. Friedrich Schleier-macher (1768–1834), the father of liberal Protestant theology, redefined religion as an immediate feeling of absolute dependence on God.

This continuing separation of faith from reason allowed nineteenth-century German “neologians” to favor philological and historical readings of the Bible—arguing radical positions such as that the Pentateuch has no genuine historical material at all.

By the early 1830s, the Tübingen School arose. These thinkers were influenced largely by theologian Ferdinand Christian Baur (1792–1860), who had adopted the philosophy of Georg Hegel (1770–1831) that history is a struggle between opposing forces, inexorably generating the Geist, or spirit of reason. Baur and his colleagues interpreted each biblical text separately as a product of its particular time and place. Their approach became known as “historical” or “higher” criticism. It would transform academic study of the Scriptures and also provoke considerable controversy.

One of higher criticism’s most controversial developments came when Julius Wellhausen (1844–1918) divided the purported literary origins of the Pentateuch into four sources—the J (Yahweh), E (Elohim), D (Deuteronomic), and P (Priestly). This reduced the entire Pentateuch from a unified record of divine revelation to a product of historical change.

Liberal Protestant assumptions about what counted as authentic religion lurked behind Wellhausen’s work. He contrasted the “religion of the letter”—the allegedly dead, ritualistic, and legalistic faith of postexilic Judaism—with the “religion of the spirit”—the fresh and vital belief of the prophets. His deeper (and anti-Semitic) agenda pitted Protestant orthodoxy’s seemingly lifeless ritual of creed and ceremony against the vibrant and simple faith of Jesus and the early church.

A more balanced position would emerge in the work of the Cambridge trio J. B. Lightfoot (1828–1889), B. F. Westcott (1825–1901), and F. J. A. Hort (1828–1892). All three devoted themselves to producing a revised Greek New Testament, which became the basis of the Revised Version. These Cambridge scholars remained thoroughly orthodox in their theology and promoted what they called “honest criticism” confirming the truths of Christian faith and the supremacy of Scripture. They influenced American pushback against higher criticism.

It took some time for higher criticism to reach the United States. Puritan ministers had thoroughly studied Scripture and guided parishioners through it with works such as Cotton Mather’s (1663–1728) Biblia Americana—6,000 manuscript pages of textual commentary, Jewish antiquities, harmonization of contradictions, and specifications of fulfilled prophecy, all citing eighteenth-century European scholarship. Yet there had always been protests as well; deists like Ethan Allen (1738–1889) and Thomas Paine (1737–1809) lampooned the Bible and the church in the eighteenth century, and President Thomas Jefferson (1743–1826) embraced similar critical views.

In the nineteenth century, an increasing number of Americans crossed the Atlantic to take up advanced study of Scripture in England, France, and especially Germany. Views traveled back. Congregationalist ministers took the lead in popularizing higher criticism. Horace Bushnell (1802–1876) criticized orthodox doctrines and demanded parents discontinue teaching their children Scripture history in his Discourses of Christian Nurture (1847). In Nature and the Supernatural (1858), Bushnell called readers to reconcile science and religion by adapting religion to the “sturdy facts of science.”

In the early 1880s, Henry Ward Beecher (1813–1887) attacked—from the pulpit—the idea that every part of the Bible is divinely inspired. Shortly afterward Lyman Abbott (1835–1922), his successor, asserted in The Evolution of Christianity (1892) that historical progress demands that Christians reject traditional doctrines of inspiration.

Despite these developments most Americans’ views of the Bible remained largely conservative—most importantly under the influence of Princetonians Charles Hodge (1797–1878), Archibald Alexander Hodge (1823–1886), and B. B. Warfield (1851–1921).

In his Systematic Theology (1873), Charles Hodge argued that the Scriptures are “the Word of God, written under the inspiration of the Holy Spirit, and therefore infallible”—which extended to “statements of facts, whether scientific, historical, or geographical” and in fact to “everything which any sacred writer asserts to be true.” Warfield articulated the doctrine of biblical inerrancy, which became the theological mainstay for the early fundamentalist movement.

Nevertheless German theology continued to make inroads, even among more conservative thinkers such as Swiss-born theologian and church historian Philip Schaff (1819–1893), who helped professionalize the US academic field of biblical studies. While Schaff remained cautious regarding higher criticism, he adopted a Hegelian faith in historical progress and development, which he tried to combine with his Christian beliefs.

One of Schaff’s younger colleagues, Charles Briggs (1841–1913), studied in Berlin and observed that the German critics, though “too much influenced by rationalism” had “thought more deeply and candidly . . . and seen the difficulties and tried to grapple with them, whereas we have overlooked them or passed them by without examination.” Briggs’s ideas led to a heresy trial in his home Presbyterian denomination. After being defrocked, he joined the Episcopal Church.

In 1892 William Rainey Harper (1856–1906), a noted Hebrew scholar, founded the new University of Chicago. Next to Briggs, Harper was the most prominent advocate for higher criticism in the country, arguing that the new university should be free from “ideas that have been dead for decades” just as the church should be liberated from “dogmas of which the real meaning has been forgotten.” The Chicago approach centered on a so-called scientific method, looking at Scripture from philological, exegetical, historical, and sociological perspectives.

By the twentieth century, the new criticism had shifted to naturalistic principles and completely excluded supernatural events such as miracles and prophecy. Skeptical thinkers now concluded that the mediating positions of liberal theologians were nothing more than a loss of nerve. Joseph McCabe (1867–1955), ex-Catholic priest turned atheist, argued in The Bankruptcy of Religion (1917) that higher criticism had wrongheadedly tried to preserve religion and theology against the unstoppable march of science; for him the Old Testament was childlike and demonstrably wrong, with “numerous palpable blunders and inconsistencies” and Christ was “a human and fallible person.”

Fundamentalists pushed back. This movement took its name from the pamphlet series The Fundamentals, 90 essays published from 1910 to 1915 to defend traditional Christianity against higher criticism, evolution, and liberal theology. In 1910 conservative Presbyterians identified five fundamentals that guided the movement: inerrancy of the Bible, the virgin birth, substitutionary atonement, Christ’s bodily Resurrection, and the historicity of miracles. In the tradition of both Hodges and Warfield, J. Gresham Machen (1881–1937) attacked higher criticism and its relationship to liberal theology in the influential Christianity and Liberalism (1923). He left Princeton in 1929 to help found the conservative Westminster Theological Seminary

Today those who read the Bible remain divided between these three positions—abandoning the Bible altogether, attempting to reconcile science and scholarship with the Bible, or rejecting anything that compromises its authority. The battle is still fierce, and the stakes remain eternal.

James C. Ungureanu is adjunct lecturer at Braniff Graduate School of Liberal Arts at the University of Dallas, and the author of Science, Religion, and the Protestant Tradition: Retracing the Origins of Conflict.

The Bible for the church

Use these questions on your own or in a group to reflect on how the Bible has formed you and your church.

The Bible in America: recommended resources

Read more about how the Bible has shaped the American church in these resources recommended by our authors and CH staff.

the contributors and editors