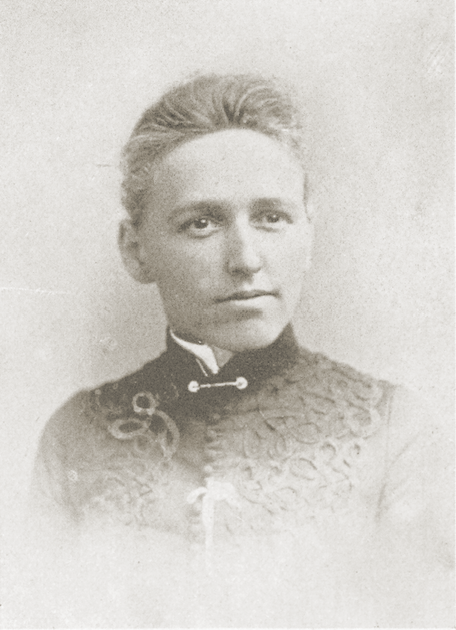 [Above: Kate Bushnell from A Woman of the Century: Fourteen Hundred Seventy Biographical Sketches Accompanied by Portraits of Leading American Women in All Walks of Life, 1893, p. 142—University of Victoria Libraries. Special Collections © 2015 Oxford University Press. All rights reserved]

Katharine Bushnell (1855–1946) was a remarkable figure in the history of American social reform as medical missionary, temperance worker, and social purity (i.e., antiprostitution) activist. Late Victorian Protestantism was forward-looking and socially oriented, and it strove to reform society along broadly conceived notions of biblical truth. At the height of her career, Bushnell, a Methodist, became a household name.

Bushnell was the seventh of nine children; her parents moved to Evanston, Illinois, when she was 16. It is hard to imagine a location that could have better prepared her for her future work. Inspired by faith, Evanston’s women in the 1870s pioneered education and voluntary work for women, enthusiastically supported the women’s foreign missionary movement, and transformed temperance into a popular cause. Bushnell attended what is now Northwestern University from 1873 to 1874; dean of women Frances Willard (1839–1898), a leading temperance reformer, mentored her. Encouraged by the president of the American Neurological Association, she attended Chicago Women’s Medical College and served as a missionary doctor in China from 1879 until 1882 when illness sent her home.

As part of a pioneering generation of female physicians, Bushnell and many of her classmates considered themselves practitioners of “moral medicine” in the footsteps of Elizabeth Blackwell (1821–1910). Blackwell, the first American woman licensed as a doctor in 1849, insisted female physicians had a “glorious moral mission.”

Rather than imitating men, she believed women could revitalize the profession “by recognizing the inseparable connection of . . . the soul and the body” and developing “the moral aspect of the physician’s noble work.” Years later Blackwell expressed admiration for Bushnell, her “brave medical sister,” for carrying on this legacy.

After Bushnell came home, she joined Willard’s Woman’s Christian Temperance Union (WCTU) as National Evangelist of the Department of Social Purity. There she worked to abolish prostitution and the Victorian sexual double standard that fed it. She worked in Wisconsin against the white slave trade; a bill passed there was nicknamed the “Kate Bushnell Bill.” After connecting with Josephine Butler (see pp. 34–36), Bushnell traveled to India at Butler’s en­cour­age­ment to gather information on pro­st­itu­tion in British army garrisons.

Over time Bushnell adopt­ed an increasingly critical view of traditional Christianity after repeated en­counters with seemingly upstanding Christian women and men who thought nothing of inflicting appalling cruelties upon society’s most vulnerable women.

Bushnell wanted to dissociate Victorian family arrangements from their presumed Christian roots, questioning male headship and female submission and dismissing the idealization of motherhood. Butler encouraged her; they prayed together and agreed that “the social evil [prostitution] would never be got rid of so long as the subordination of woman to man was taught within the body of Christians.”

This led her to write God’s Word to Women (1916), feminist reinterpretations of the Bible based on a women’s correspondence Bible course Bushnell had begun in 1908. While pressing revolutionary claims, she still considered every word of the original text “inspired, infallible and inviolable.” The book was at once progressive and traditional, radical and conservative. Ultimately, however, it failed to accomplish the revolution Bushnell hoped for and became almost lost to history.

In the 1930s Bushnell began to crusade against birth control, which she believed made women more susceptible to abuse by men and the state; this alienated former friends and supporters. As late as 1943, eyesight and hearing faltering, she was still attempting to recruit someone to carry on her purity work “in Mrs. Butler’s uncompromising way.”

Even then her “deeper interests” remained biblical. She remained certain that Christ was “the great emancipator of women” and that “if women were given their God-ordained place in the church, Christendom would expand . . . [in] influence.” Even on her deathbed, she exhibited pluck and devotion, gathering up her remaining strength to witness to one of her neighbors.

When “second-wave” feminism arrived in the 1960s and 1970s, it passed by Bushnell’s devout religious faith, unwavering commitment to sexual self-restraint, and staunch opposition to birth control. But her work has continued to speak to those who see in the Scriptures God’s message of liberation for women.

Excerpted with permission Oxford University Press from Du Mez's A New Gospel for Women: Katharine Bushnell and the Challenge of Christian Feminism.

Kristin Kobes Du Mez is author of A New Gospel for Women: Katharine Bushnell and the Challenge of Christian Feminism, from which this is excerpted with permission from Oxford University Press.