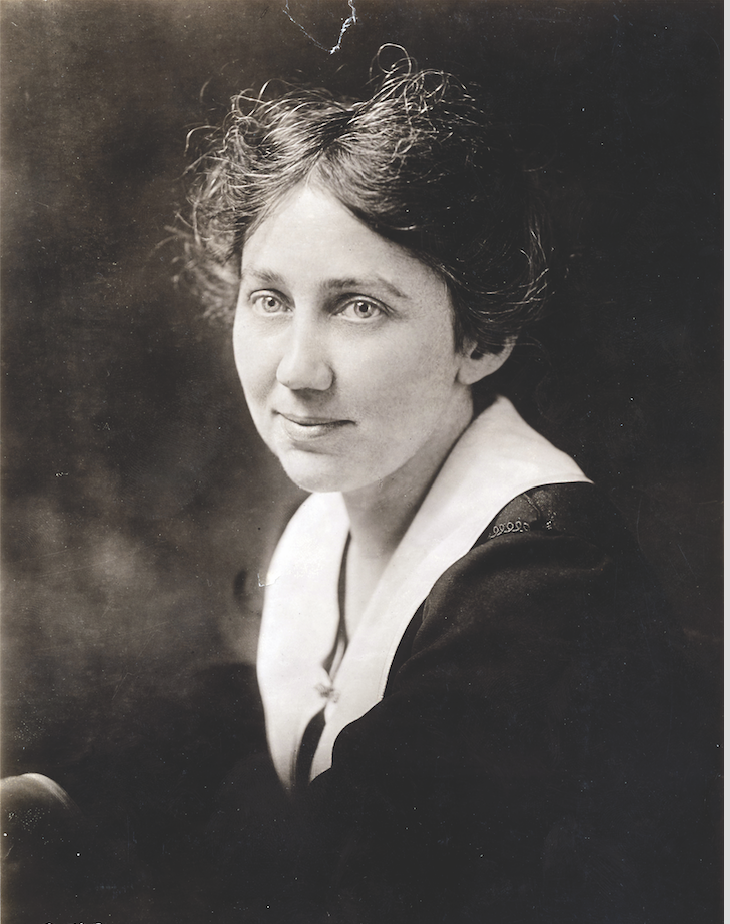 On Sunday, September 4, 1910, Winnetka Congregational Church beheld a peculiar sight: when it came time for the sermon, a woman took the pulpit. That was startling enough, but there was more. Agnes Nestor (1880–1948) would not normally have darkened the door of the fashionable Chicago-area church. She was a “militant labor leader,” declared that morning’s newspaper—secretary of the International Glove Workers’ Union and treasurer of the local chapter of the Women’s Trade Union League.

Nestor preached on “The Life of Working Girls Today in Shops and Factories,” describing how a girl

who works long hours on a nerve-racking job begins to lose her former view of life. . . . [S]he loses the rollicking laugh of girlhood. Unless she has a strong determination to better herself, she gives up in despair and continues to work for an oppressive task master on a meager salary until her health begins to fail.

Nestor called for an eight-hour day and abolishing piecework (work paid per item rather than per hour).

Nestor was one of at least six Chicago union leaders to preach that morning. Across the nation ministers responded positively to the American Federation of Labor’s call for them to observe Labor Sunday by devoting worship to issues of worker justice—a thought almost unimaginable a decade or two before.

Amid brutal industrial warfare in the late nineteenth century, churches consistently sided with capital over labor. But in the early twentieth century, denomination after denomination acknowledged the trade union movement. Workers themselves keyed the turnabout: among important catalysts for the Social Gospel’s rise were glove makers, blacksmiths, and other working-class activists, most long since forgotten.

One was Andrew Cameron (1834–1892). In the wake of the Civil War, the Scottish immigrant founded the Workingman’s Advocate, a newspaper that gained a national audience and vaulted him to the fore of the early American labor movement. For Cameron questions of wages and workday length were tied to the meaning of the gospel for an industrializing society.

In 1867 not a single Chicago minister came to the aid of what would ultimately prove a failed general strike in favor of an eight-hour day. Cameron lashed out: “In all reforms, in which labor and capital have been interested, the Church has thrown its influence in behalf of the money changers.” William W. Patton (1821–1889), one of Chicago’s leading Congregational clergymen, responded with a critique of labor:

For several years past preconcerted and systematic effort have been made by demagogues and so-called friends of American mechanics and labor men, to cause them to be dissatisfied and discontented with the position to which the Supreme Ruler of all has assigned them in this world.

Cameron issued withering retorts, calling Patton’s words ”repugnant alike to the teachings of Christ and the enlightened spirit of the age.” He was convinced that the labor movement was not just fully compatible with the gospel, but a tangible manifestation of it: “Our fight is not against Christianity, but against those who use it as a cloak to secure their selfish purposes.”

Cameron continued to preach a working-class gospel and to be at odds with leading ministers. Even Social Gospel proponent Washington Gladden (1836–1918) was not beyond reproach. When Gladden published Working People and Their Employers (1876), Cameron called the book “worthless” and insisted, “The author ought to have put the Englishmen’s motto in front: ‘You keep ’em pious and we’ll keep ’em poor.’”

Had Cameron been a lone voice, church leaders might have ignored him. But he was not. Countless other working people professed prolabor faith. In Gilded Age Chicago, few did so with more gusto than Maria Darker Wynkoop (1827–after 1845), a British immigrant whose regular column for the Chicago Tribune frequently criticized the church: “Did the ministers of the Gospel perform their duty and maintain the cause of the struggling poor as did Christ, our beloved country would not be in the condition it is to-day.” This resonated with her readers, including a woman who wrote to the editor, “At present the workingman is rather repelled than otherwise by the grand church, the grand people who are there, and the grand rent marked on the empty pew he finds his way into.”

When such sentiments began to translate into concerted action, working people caught the clergy’s attention in a new way. By the early 1890s, ministers feared that churches were losing the allegiance of the working classes. Labor leaders knew this pervasive anxiety presented them with an opportunity, and they perfected the art of capitalizing upon it.

At the 1894 annual meeting of Chicago’s Congregational Club, dedicated to the “Relation of the Church to the Laboring World,” speakers included Louis W. Rogers (1859–1953), editor of the Railway Times, and L. T. O’Brien, president of the retail clerks’ union, both ardent proponents of a working-class social Christianity. If the club’s well-heeled members did not realize this coming in, they figured it out when Rogers pronounced:

I know where Christ stood. He was for the poor. He warned the rich, he denounced force and wealth and usury. He toadied to no monopolist, he preached from no palaces, he sold no pews! He was of and for the people. . . . The spirit of Jesus is absent from the modern church.

When I go to church I see in the front pew a man who snatched the bed from under a widow, and in another pew a man whose real estate is used for immoral purposes. If the church bore any resemblance to Jesus I would be a church-goer, but it does not.

These barbs did not sit well with the audience, which included William Rainey Harper (1856–1906), the president of the University of Chicago. He challenged Rogers and O’Brien: “Why not found a church of your own?” Little did Harper anticipate that they would do just that. On February 11, 1894, the Modern Church held its inaugural service at Bricklayers’ Hall.

The organization, sponsored by Chicago’s Trades and Labor Assembly, refused to accept funds from the city’s economic elite and in its initial weeks hosted prolabor preachers such as Unitarian Jenkin Lloyd Jones (1843–1918). It disappeared from the historical record later that spring, but it compounded church leaders’ mounting anxieties.

In 1896 Baptist minister Henry F. Perry published “The Workingman’s Alienation from the Church” in the American Journal of Sociology. He had distributed surveys to workers across the country. One respondent wrote, “Jesus Christ is with us outside the church, and we shall prevail with God.” Another lamented, “Most of the ministers are muzzled by their masters and dare not preach the gospel of the carpenter of Nazareth.”

Perry summarized their thoughts on attracting working people back to church: “Apply the Sermon on the Mount”; “Preach Christianity instead of theology”; “Let the pastor have a personal relation with the needs of labor. Be our champion.” His findings were hardly unique. Across the industrial North, from Pittsburgh to St. Louis and New Jersey to Ohio, ministers conducted studies that all pointed to the same conclusion.

In the early years of the twentieth century, a middle-class Social Gospel finally took root in institutional churches. In 1908 the Methodist Episcopal Church adopted a Social Creed, ratified by the Federal Council of Churches shortly after its founding that same year. That creed has often been viewed as a pathbreaking statement. In the context of official church teaching, it was. But such touchstones of middle-class social Christianity came as belated responses to a generation of working-class religious activism. The prophetic witness of working women and men drove the rise of the American Social Gospel. CH

Heath W. Carter is associate professor of American Christianity at Princeton Theological Seminary and author of Union Made: Working People and the Rise of Social Christianity in Chicago This article is adapted with permission from Congregational Library & Archives.