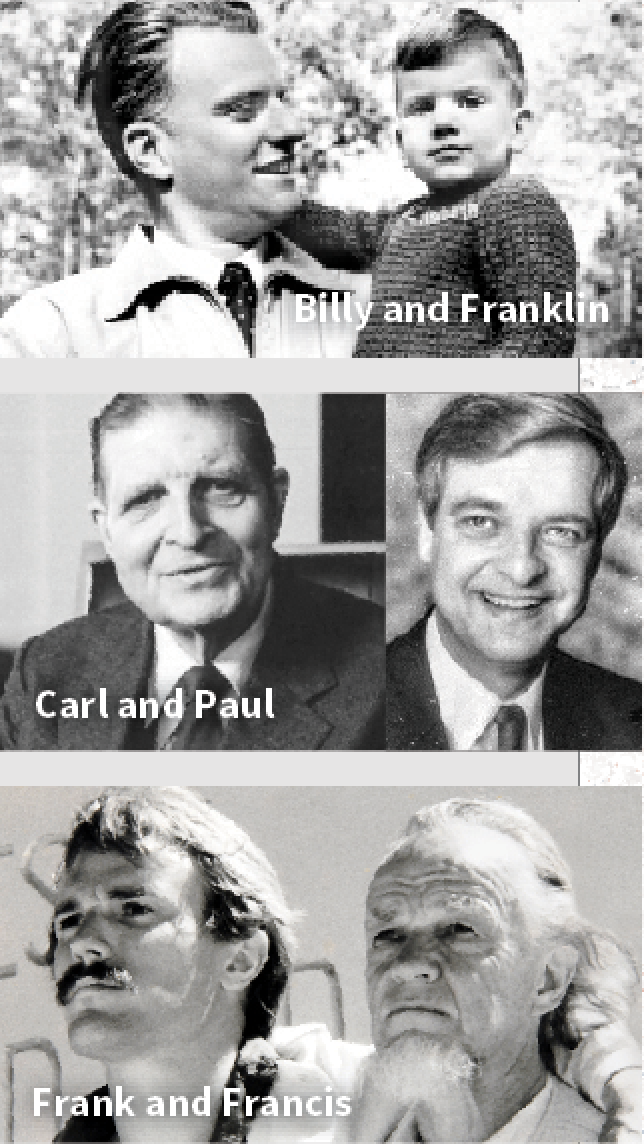 [The fathers and sons composite]

From his momentous 1949 Los Angeles revival to his final crusade in 2005, Billy Graham showed he was not only a powerful preacher of the gospel to millions; he was also a civic icon, a national pastoral presence whom politicians courted as they sought prayer and votes. Graham originally prized political relationships, most famously his friendship with Richard Nixon (1913–1994). But after Nixon’s Watergate downfall, a chastened Graham increasingly resisted political alliances.

Graham was also a father; the most visible of his five children is his son Franklin (b. 1952), who heads both the Billy Graham Evangelistic Association and the innovative humanitarian aid organization Samaritan’s Purse. Franklin Graham is also known for

his controversial political commentary and vocal support of Donald Trump (b. 1946). This has led some observers to contend that Franklin has repoliticized his father’s legacy, pulling the Graham name back into the political fray that Billy had tried to leave behind.

Though lesser known than Graham, Carl F. H. Henry also helped shape American evangelicals’ civic awareness in the second half of the twentieth century, both as a theologian and as founding editor of Christianity Today.

Henry made the case for evangelicals to refuse what he saw as the false choice between fundamentalist separatism and liberal compromise. Instead he urged evangelicals to engage politics and culture, bringing the old-time gospel to bear on public issues of the day.

If Carl Henry preached civic engagement, his son Paul (1942–1993) practiced it. Paul Henry initially followed in his father’s academic footsteps, earning a PhD in political science before joining the Calvin College faculty in 1970. He later ran for office, winning terms in Michigan’s legislature and later entering the US Congress, where he served from 1984 until his untimely death from cancer in 1993.

Though a Christian conservative, Paul avoided the emerging religious right. Instead he argued that while evangelicals have a political calling, they must resist manipulation. In a sense Paul was wrestling with the success of his father’s legacy. In the 1980s, with a surging Moral Majority, conservative Protestants no longer needed to be told to engage politics and culture. Instead Paul Henry urged evangelicals not to yield to the temptation to forsake their Christian identity for political expediency.

L’Abri became a destination for midcentury spiritual seekers, and Schaeffer grew popular for his Christian apologetics with a countercultural twist. Schaeffer’s books and films exposed the follies of encroaching secularism and circulated widely among evangelicals, and his later forays into pro-life politics offered intellectual heft to the budding religious right.

Growing up in L’Abri, Francis’s son Franky (b. 1952) had an unusual childhood. As a young man, Franky oversaw production of his father’s films, including the famous anti-abortion series Whatever Happened to the Human Race? (based on Francis’s 1979 book with C. Everett Koop).

Franky gradually grew disenchanted with what he saw as the excesses of 1980s evangelicalism and wandered from the evangelical fold, first converting to Eastern Orthodoxy in 1990 and more recently describing himself as a “Christian atheist.” Now known as Frank, he writes critically on evangelicalism with a confrontational style. Frank proves he is still very much his father’s son—a controversial critic of a world gone mad. Like Franklin Graham and Paul Henry, he has found a legacy of civic engagement hard to leave behind.

Aaron Griffith is assistant professor of modern American history at Whitworth University and author of God’s Law and Order.