It Happened on SEPTEMBER 22 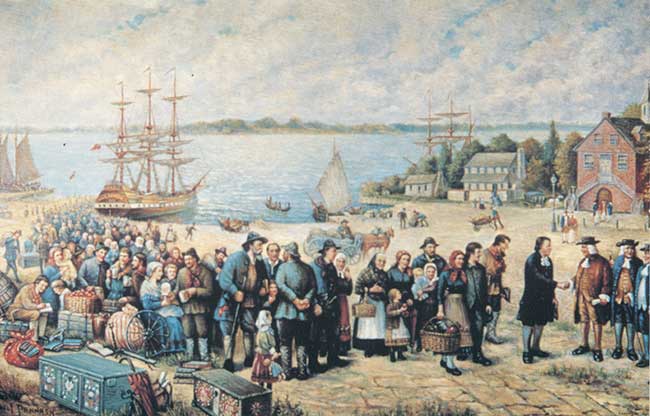 On this day, 22 September 1734, a group of one-hundred-and-seventy-one religious refugees landed in Philadelphia. Protestants from central Europe, they followed the teachings of Kaspar Schwenckfeld von Ossig. They had come to Pennsylvania to enjoy the colony’s well-known religious toleration.

Born in 1489, Schwenckfeld became an eager follower of Luther and spread the Reformation in Silesia. However, Schwenckfeld met Anabaptists whose godly lives reflected a deeper Christianity than most Lutherans. Poring over the Scriptures, he found he disagreed with Luther’s interpretations of many doctrines, including justification by faith. Faith had to be more than mere assent to a teaching, but rather a life-changing inner principle.

In light of that understanding, Kaspar insisted that in taking the Lord’s Supper, true Christians ate the spiritual body of Christ which would grow as a seed and transform them into the image of God and the person of Christ. He also opposed infant baptism, seeing the rite as a symbol of an inward conversion which must therefore be submitted to with understanding.

Driven from place to place by Lutherans, Catholics, and Swiss Reformed, Schwenckfeld found safe haven wherever he could and wrote many books. These won converts to his doctrines. Although he refused to found a sect, he called his followers Confessors of the Glory of Christ. Eventually they became known as Schwenckfelders or Schwenkfeldians.

Small groups sailed to the New World. The largest group that settled in Pennsylvania arrived on this day.

The Schwenkfelders were remarkable for their gratitude. Two days after they disembarked, they held a thanksgiving for their safe arrival to their new homeland. They have repeated this each year on or around 24 September.

Five congregations of Schwenkfelders remained in Pennsylvania at the beginning of the twenty-first century. Apart from his effect on his own followers, Schwenkfeld’s strongest influence was on the Society of Friends (Quakers) that appeared in England in the seventeenth century.