It Happened on JULY 14 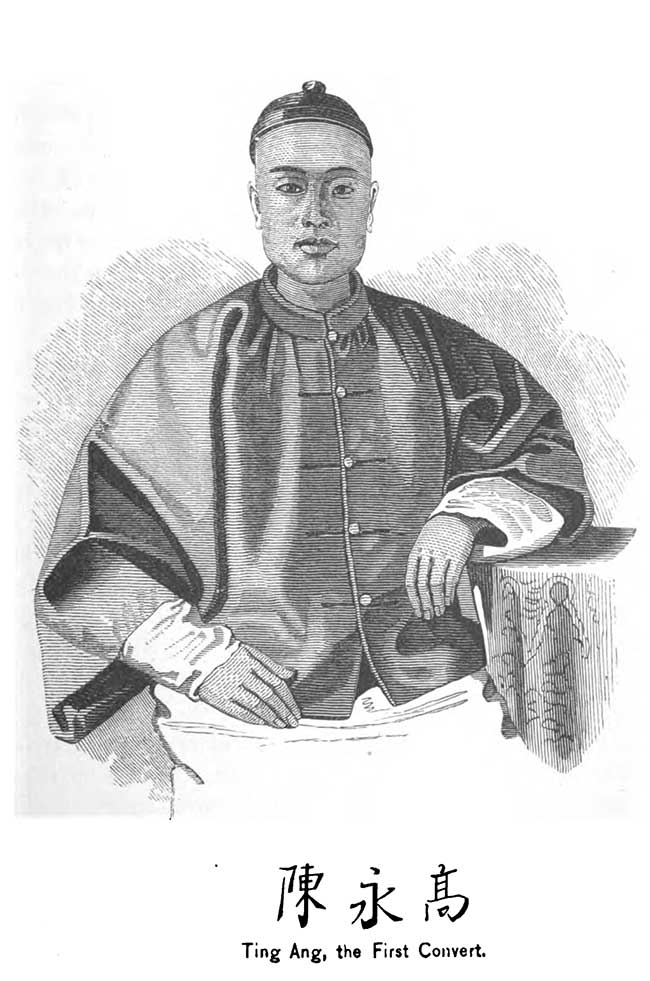 On this day, 14 July 1857, Methodist missionaries in Fuzhou, China, baptized their first convert. Here is how Robert S. Maclay reported the event in a letter that was reprinted many years later in the October 1900 issue of Gospel in All Lands.

On Sunday, July 14, 1857, we baptized the first convert in connection with the Methodist Episcopal Mission in China. His name was Ting Ang. He was forty-seven years of age, and had a wife and five children. His home was within a few minutes’ walk of the viceroy's palace in the city of Foochow. He stated that about two years before his conversion he began to drop in at our Iongtau chapel to hear what the foreigner had to say. This happened as he was passing in and out of the city on business, and it seems that he was interested in what he heard. He obtained some of our books and perused them. Subsequently he began to call in at our boys’ day school in the ward where we live, and not long afterward the teacher of the boys’ school brought him to our Sunday morning service in the Tienang church.

This was our first acquaintance with the man, and we at once invited him to attend the weekly inquiry meeting which we had just established on Friday afternoon. He continued to attend the inquiry meeting, and we were much pleased with his deportment. He was not familiar with the written character, and could not read very well, but he at once commenced to learn the Commandments and Apostles’ Creed, and soon he was able to read and explain them quite correctly. We instructed him carefully in the doctrine of Christianity, and he expressed his fixed purpose to live according to its principles. He commenced private and family prayer and frequently spoke of the delight he felt in the service of God.

One day Brother Gibson and I called to see him at his house. Our visit was unexpected to him, but he received us very cordially.  On entering the house we were pleased to notice on the table a number of Christian books, which, it was evident, he had been reading. We looked in vain for any traces of idolatry, and we felt thankful that from at least one house in Foochow the idols had been cast out. Some six weeks before our visit the man had brought out and given to us all his household gods, and one object of the present call was to ascertain whether he had really cast away his idols. Our examination fully satisfied Brother Gibson and myself on this point.

We conversed with his family, and found that they understood and approved of the course he intended to pursue. After conversing some time I read a part of the fifth chapter of Matthew’s gospel and prayed with them. It was not without emotion that I thus offered prayer, for the first time, in a Chinese house, within the walls of the proud city, and that, too, almost under the shadow of the viceroy’s palace.

The man continued to attend our meeting, gave us every evidence of a sincere determination to lead a Christian life, and, after a rigid examination, our mission decided he was a proper subject for baptism.

The ordinance was administered in the Tienang church, in the presence of the congregation, at the afternoon service. After suitable introductory remarks, explanatory of the nature of both baptism and the Lord’s Supper, the candidate was requested to stand up and repeat, in an audible, voice, the Commandments and the Baptismal Covenant. I then explained them, sentence by sentence, the candidate audibly expressing his cordial belief in them, and his determination faithfully to keep and obey them.

I then proceeded to baptize him, sprinkling the water on his head, while he knelt at the altar. Alter his baptism, he united in the celebration of the Lord’s Supper with the members of our mission and the Rev. Mr McCaw, of the Church of England mission, who was present on the occasion.

The Heavenly Peace Church that Maclay founded in Fuzhou played a significant role in later Chinese Christianity. Evangelist John Sung preached there and another of its evangelists, Dora Yu, nurtured Watchman Nee in the faith.