It Happened on JULY 11

The Changing Faces of the Ukraine’s Saint Olga 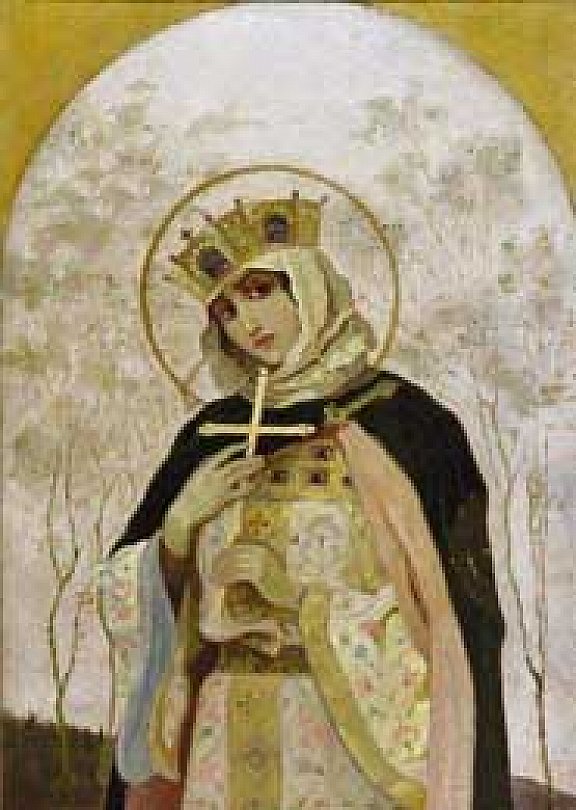 OLGA IS KNOWN today as a saint in both the Eastern Orthodox and Roman Catholic churches, but her first actions as regent of the eastern Slavic confederacy known as “Rus” were far from saintly. Her husband, Igor, had ruined Kiev with his wars. He was killed while looting a fierce Drevlian tribe west of Kiev in 954.

Because their son Sviatoslav was underage at the time, Olga became regent and was determined to avenge her husband. Drevlian prince Mal unsuspectingly played into her hand. Olga had the nickname “Prekrasna,” meaning “very beautiful,” so he sent an embassy to ask her hand in marriage. She buried the ambassadors alive, but took care Mal would not hear of it. He sent a second embassy, and she burned them to death in a bath house.

She then pretended to entertain his proposal of marriage and set out for the Drevlian lands, asking only that vast quantities of mead be prepared at the city where Igor had been slain, so that she might bewail her dead husband. When the Drevlians were thoroughly drunk, her followers massacred about five thousand of them. Olga went on to subdue the entire region. She proved to be a great organizer and a capable administrator of her realm.

Three years after the death of Igor, Olga traveled to Constantinople, to show off her military might and to negotiate diplomatic and trade agreements. Impressed by the strength, unity, and riches of Byzantium and Saxony, her two strongest neighbors, both of which were Christian, she converted to Christianity and was baptized, taking the name Helen. The emperor gave her rich gifts. About this time, Sviatoslav assumed the throne. He wanted nothing to do with his mother’s newfound faith, preferring the rough life of a pagan soldier. However, he did allow her to keep priests in attendance.

Olga endeavored to interest her son in improving Russian commerce through bridge building and road construction, as well as developing new towns, but Sviatoslav had little patience for her suggestions. Neither did he accept her arguments in favor of Christianity. Others did listen, however, and a sizable faction of Russians became Christians.

Perhaps these developments had some influence on her grandson Vladimir. He became a Christian years after her death. Under him, Christianity flourished in Russia, and he is credited with Christianizing the Ukraine and Byelorussia as well.

Olga died in 969. Sviatoslav permitted her body to be given a Christian burial. The Russian Orthodox Church named her its first saint. Her feast is on this day, 11 July.