It Happened on MAY 7

NILUS INTRODUCED A NEW FORM OF MONASTIC PRACTICE TO RUSSIA 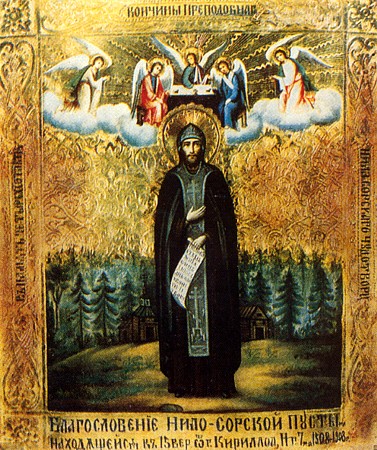 The Russian Orthodox Church and its monasteries were wealthy in the fifteenth century. In addition to tithes, offerings, and gifts, the church owned as much as one third of the land. Rich nobles gave entire villages (with their serfs) to the church. Some church leaders were unhappy with this arrangement, which hurt the common people. Nilus of Sora (also known as Nil Sorsky) created the template for a reform movement.

Apart from the year of his birth, 1443, we know little about Nilus’s family or his early life. He may have done copy work. While still a teen he entered the monastery of St. Cyril of White Lake. How long he remained there before setting off to visit Jerusalem is not known. He may not have reached Jerusalem. But he did study monastic institutions around Constantinople and Greece.

Mount Athos in Greece hosts a famous monastic community. Its monks had adopted a system of meditation, known as hesychasm, by which they tried to focus until they could see the uncreated light of God. They described this as the light that infused Christ at the Transfiguration. Nilus settled there, learned its monastic systems, studied the church fathers, and practiced hesychasm.

When he returned to St. Cyril monastery sometime before 1489, he built himself a cell apart from the main monastery. Finding that he was often interrupted, he moved about ten miles away and founded a skete on the Sora River. A skete, as developed by Nilus, is a monastic organization in which two or three monks live in each independent cell or separate hut. The men come together for communal worship and readings. Women were not allowed in Nilus’s skete, although women later organized sketes of their own. The monks had to provide for themselves and do useful work, such as copying manuscripts.

The skete refused gifts. Nilus criticized landowning by the church. He attended the Russian Orthodox councils of 1490 and 1503, where he urged leniency for believers who strayed from orthodoxy, or who criticized the church. Thanks in part to his intervention, church leaders executed no “Judaizers” (reformers). After his death, that changed. Supporters of big estates executed those who wanted to restore church lands to secular use.

Nilus’s fame led many to seek his wisdom. He dispensed advice to those who wrote him. Typically, he encouraged people to suppress their flesh and to focus on prayer and to meditate on Christ or on death. To one correspondent he wrote, “And if you overcome these struggles [against seductive thoughts], you will learn through temptation that, by the grace of God, these thoughts are always conquered by the name of Jesus and there is no more sure way to victory.”

On this day, 7 May 1508, Nilus died. In his will he stated “It has always been my earnest striving, as far as my strength allowed, to receive no honor or praise in this monastery life: so be it after my death.” Sketes remained influential in Russian history. Their simplicity helped check the excesses of greedy churchmen who piled estate upon estate.