It Happened on MAY 4

BIRTH OF THE BROTHERHOOD OF ANDREW AND PHILIP 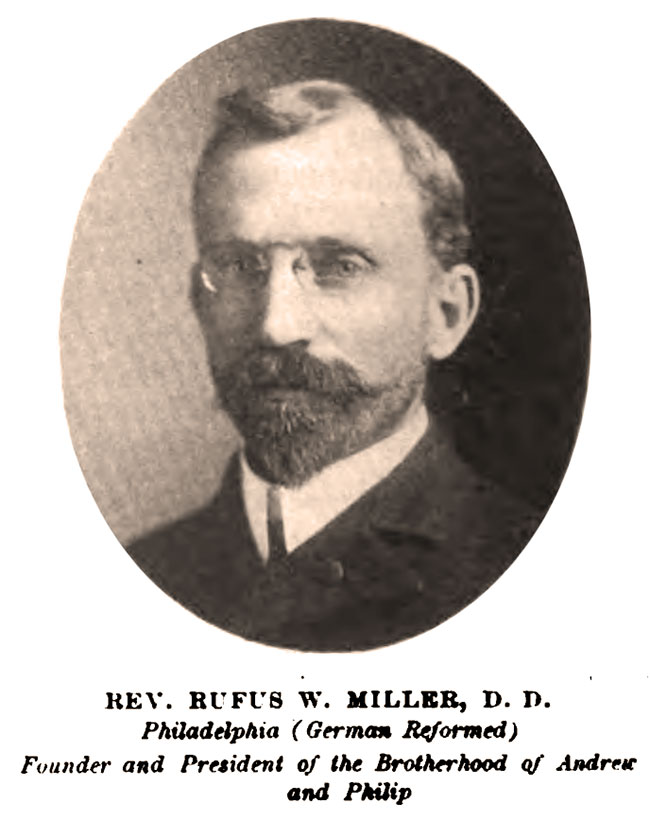 In 1883, James T. Houghtling of the St. James Episcopal Church in Chicago brought twelve men together with a pledge to follow the example of the apostle Andrew who brought people to Christ. The Brotherhood of Saint Andrew spread to other Episcopal churches.

Such a good idea could not be limited to a single denomination. A pastor of a German Reformed Church observed the usefulness of Houghtling’s organization and determined to bring a similar work to his own church at Reading, Pennsylvania. On this day, 4 May 1888, Rufus Wilder Miller organized fifteen young men of his local church into a Bible study and prayer group called the Brotherhood of Andrew and Philip.

Within a short time, the brotherhood inspired other Reformed Churches to similar work, and, before long, enough chapters had emerged that a national convention was needed. The work was bound together by a loose federation and a monthly periodical, the Brotherhood Star.

Sections two and three of an official publication described the work:

Section 2. The fundamentals of the Brotherhood are the Rule of Prayer and Rule of Service. The Rule of Prayer is to pray daily for the spread of Christ’s Kingdom among men and for God’s blessing upon the labors of the Brotherhood. The Rule of Service is to make personal efforts to bring men and boys within hearing of the gospel of Jesus Christ, as set forth in the services of the Church, prayer-meeting, and men’s Bible classes. Section 3. The Brotherhood, recognizing that men and boys have fourfold natures, physical, mental, social, and religious, urges its members to be concerned for the development of the whole man, and to manifest the spirit of Christian comradeship in all the relations of life.

The organization quickly jumped denominational lines and opened membership to any evangelical church. Thus it became one of several parachurch movements at work in nineteenth-century America. (Other such organizations included Bible societies, YMCAs, and temperance unions.) By 1900 the brotherhood had over forty thousand individual members in nine-hundred-and-twenty-one chapters across twenty-three denominations in Australia, Canada, India, Japan, and the United States. Baptists, Congregationalists, Methodists, and other denominations operated through their own councils as well as belonging to the main federation.

Chapters engaged in many kinds of effort: choirs, free reading rooms, gymnasiums, boys’ clubs, debating and literary societies, lectures, mission societies, and philanthropy. The society extended its efforts to a junior brotherhood also: “Its object shall be to extend Christ’s kingdom among youth.” As with the older group, prayer and acts of service were supplemented with athletics and social activities.

America’s philanthropist businessman, John Wanamaker, helped get the organization on a sound financial footing to expand its work as its twenty-fifth anniversary rolled around in 1912.