It Happened on APRIL 3 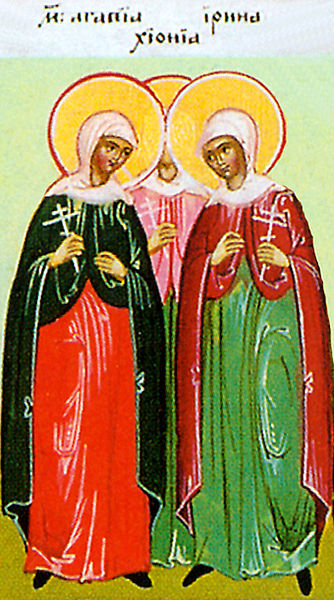 [Icon of the three sisters]

In the tenth century, a German abbess named Hrotsvitha wrote plays. She seems to have been the first western European to do so since ancient times and the first German woman ever to pen dramas. Her subjects were saints—virtuous women.

In Dulcitius, she retold the story of three sisters martyred under Emperor Diocletian. Agape, Chiona, and Irene were ordered to eat food sacrificed to pagan gods but refused. The story had accrued legends over the years and Hrotsvitha chose details that added comedy to the account. For example, men ordered by the emperor to induce the young women to sacrifice became prey to hallucinations.

The first to lose his senses was Dulcitius, governor of Macedonia. He found the virgins attractive, and decided to woo them. He was deceived into kissing and pawing the fire-blackened pots that hung in a kitchen leading to the room where the virgins were held, under the illusion he was kissing the young women. When he emerged sooty, no one wanted to be near him. In her drama Hrotsvitha has the soldiers say, “The voice is our master’s voice, but the face is a devil’s. Come, let’s take to our heels! This devil means us no good!” When Dulcitius reaches home, his ushers say, “Who is this fearsome, horrid monster? Coming here in these filthy rags! Come, let us beat him and throw him down the steps. Stop him from coming further.”

In a more historical version, it seems that finding Dulcitius incapable of dealing with the young women, Emperor Diocletian ordered Count Sisinius to handle their case. Tradition says it was on this day, 3 April 304that Sisinius burned the two older sisters to death. According to legend, although they died in the flames, their bodies appeared unscathed when the fire burned down. Because of Irene’s young age Sisinius offered her a second chance. Meanwhile copies of forbidden Christian books were found hidden in their dwelling.

Sisinius challenged Irene regarding these texts and asked her who else had known about them. She parried his questions, and just as with her older sisters, she refused to relent in her faith but answered him pertly. Sisinius then sentenced Irene to a brothel. In Hrotsvitha’s version, the soldiers who were taking Irene to the house of shame were met by two mighty warriors who declared Sisinius had changed his mind and wanted Irene taken to the peak of a nearby mountain and abandoned there.

When the soldiers reported back to Sisinius, he flew into a rage, declaring he had given no such command. Hrotsvitha had him say, “There is nothing to do but for me to mount my horse and ride to the mountain to discover who has dared to play us this trick.”

Sisinius and his soldiers found themselves stumbling around in circles, unable to reach Irene whom they could plainly see. Finally one of the soldiers aimed his bow at the girl and ended her life with an arrow. Her death came two days after that of her sisters.

Stripping off the legends, it appears that five women (including Agatha, Chiona, and Irene) and a man really were apprehended for possession of Scripture. One woman was released because she was pregnant. The others were offered a chance to get off if they ate food sacrificed to idols. The three sisters refused to eat and were given the death penalty. Agape and Chiona were executed on today’s date, but Irene was given a second chance. She was probably exposed in the street before being burned or shot a couple days later. What happened to the man, Agatho, and the other woman is not recorded.