It Happened on APRIL 15

JOHN MARRANT AND HIS NARRATIVE 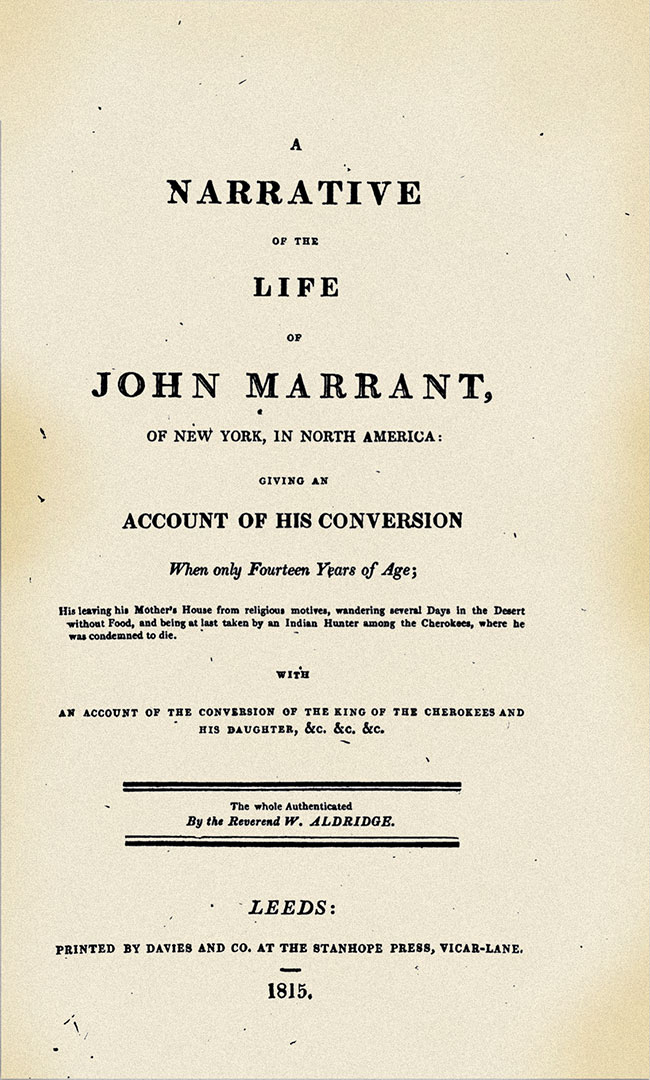 One of the most curious stories to come out of colonial-era America was that of John Marrant, a free African American. He may have been the first African American ordained as a pastor. Born in New York in 1755, he was four years old when his father died and his mother moved south with her children. In Georgia he attended school until he was eleven and learned to read and write. He also became proficient on the violin and french horn.

On his way to play a gig with a friend, the teenager encountered a crowd entering a meeting house and wondered what was the attraction. When his friend replied that “a crazy man was hallooing there,” he wanted to go in and see. His friend balked but finally agreed on condition Marrant blow his horn to disrupt the proceedings. Marrant thought that would be fun. As he tried to free up his horn amid the throng, the “crazy man,” evangelist George Whitefield, announced his text in a voice of thunder: “Prepare to meet thy GOD, O Israel,” and seemed to look directly at Marrant. Marrant fell under such deep conviction he passed out. Awakening and listening to the sermon, he cried aloud and was taken to the vestry (a room in the church). Afterward Whitefield spoke with him, saying, “Jesus Christ has got you at last.” Marrant claimed he was so distressed he could not walk and had to be carried home. Three days later another preacher, delegated by Whitefield, led him to Christ.

Marrant told this tale in his 1786 Narrative of the Life of John Marrant of New York, in North America: Giving an Account of His Conversion When Only Fourteen Years of Age, etc. Critics see many details of the Narrativeas more symbolic than real. Marrant claimed his family persecuted him for his faith until he fled into Indian territory, terrified by the baleful eyes of wild animals at night, but sustained by prayer against harm from the animal kingdom or when he lacked food and water. He recounted narrow escapes and claimed to have converted an Indian king and several other captors by his singing hymns and preaching in Cherokee. When he returned home two years later his mother and siblings did not recognize him, except his youngest sister.

In a later rewrite of his account, he added that he had taught some slave children the gospel, infuriating their mistress, who ordered the meetings to end and had the attendees whipped senseless. The mistress died suddenly of a fever, unrepentant and full of spite. Following that, Marrant encountered Mary Scott, a pure young girl who was measuring graves to find those shorter than her height. She foretold her own day of death and serenely “fell asleep in the arms of Jesus.”

Marrant claimed to have served on British ships for six years during the American revolution. His name does not appear on British naval lists, leading to suggestions his claims were false. The alternate spelling “John Morant” does occur in a list of prisoners captured from American privateers. Wounded, he spent time in a hospital in Plymouth, England. Afterward he lived with an English merchant for three years until Methodists from the Countess of Huntingdon’s Connexion commissioned him to work among freed slaves and Indians in Nova Scotia.

Marrant suffered greatly in Nova Scotia. He was the area’s only ordained black pastor and so the only one who could legitimately perform marriages, baptize converts, and dispense the elements at Communion. Stricken with smallpox, he barely survived. He also suffered a lung disease that caused him to cough blood. Despite all impediments, he led souls into genuine conversions. He taught that suffering comes to those God loves best and is intended for their eventual uplift. However, his Canadian flock, eking out a bare existence in the short growing season, was too poor to support him, and with broken health and no resources he moved to Boston where he lived with the wife he had met in Nova Scotia. Boston’s African Lodge of Masons made him their chaplain. In 1789 Marrant preached a fanciful sermon, purporting to trace Masonry through the Bible from creation down to the time of Christ and the apostles. He called on fellow Masons to lead lives of unfeigned love, helping each other even at cost to themselves.

After he returned to England, he occasionally preached at the Methodist Connexion chapel in Islington, a suburb of London. On this day, 15 April 1791, John Marrant died, just thirty-six years old. He was buried at Islington.

John Marrant left his mark on the development of African-American literature as well as in souls saved. As a pastor (and, by his own reckoning, a prophet), he inspired his Nova Scotia followers with a vision of establishing an earthly Zion, and many migrated to Sierra Leone.