It Happened on APRIL 14 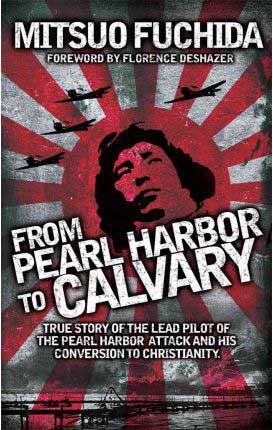 In December 1941 Mitsuo Fuchida led the surprise attack on Pearl Harbor. When he sent up a green flare, the bombers accompanying him knew it was the moment to attack. When his plane radioed “Tora, Tora, Tora,” the Japanese knew the air attack had achieved complete surprise. For the duration of the war and for years afterward, he considered the Pearl Harbor attack the most thrilling exploit of his life. He tried to top his military success throughout the rest of World War II in attacking Ceylon and Australia. He also fought in the Solomon Islands and at the Battle of Midway. When it became apparent Japan would lose the war, he advocated fighting to the last man.

When Japanese troops were disbanded, Fuchida was among them. He was dumbfounded when he learned that a war buddy had been kindly treated in American captivity. How could that be? Enemies were not supposed to be kind to each other! During the war trials following the allied victory, an American offered Fuchida a religious pamphlet in a Tokyo train station.

Despite his Buddhist background, he took it because its title intrigued him: I Was a Prisoner of Japan. It was the story of Jake DeShazer whom the Japanese had cruelly mistreated as a prisoner of war. DeShazer had been filled with hatred for his captors; but by reading the Bible he had learned to love the Japanese and after the war had become an evangelist to them. His story moved Fuchida, who purchased a Bible so he could find out for himself why DeShazer was so changed.

Reading Luke’s account of the Crucifixion, Fuchida was impressed when Jesus said, “Father, forgive them, for they don’t know what they are doing.” He would write later, “That date, April 14, 1950, became the second ‘day to remember’ of my life. On that day, I became a new person. My complete view on life was changed by the intervention of the Christ I had always hated and ignored before.”

Shortly afterward, he stood on a platform with Jake DeShazer, both men giving their testimonies. Fuchida went on to evangelize throughout the Orient. He wrote the story of his conversion in From Pearl Harbor to Golgotha. “I now work at striking the death-blow to the basic hatred which infests the human . . . . And that hatred cannot be uprooted without assistance from Jesus Christ. He is the only One Who was powerful enough to change my life and inspire it with His thoughts.”

Fuchida died in 1976 of complications from diabetes.