It Happened on NOVEMBER 14 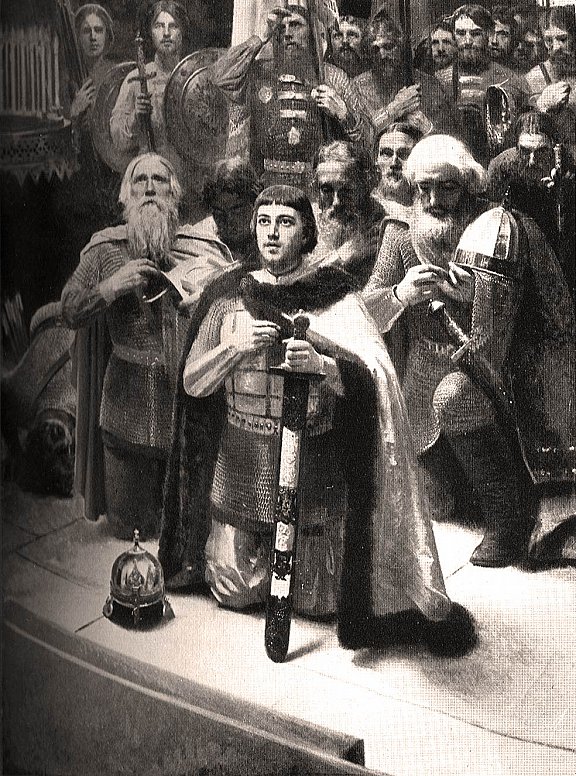 Alexander Nevsky in prayer before going into battle.

ALEXANDER NEVSKY was one of Russia’s most extraordinary rulers. Born into nobility, he was just a teenager when it fell to him to hold together a coalition of quarrelsome and independent rulers. His personal charm and devout faith helped him succeed. Alexander’s parents had taught him to honor God, and even as a boy he delighted in the Bible. Impressed by his qualities, the people of Novgorod invited him to be their prince. A chronicler wrote “He was taller than others and his voice reached the people as a trumpet, and his face was like the face of Joseph, whom the Egyptian Pharaoh placed as next to the king after him of Egypt. His power was a part of the power of Samson and God gave him the wisdom of Solomon...”

In 1240, Catholic Swedes planned an invasion of Orthodox Russia. Alexander planted sentries to warn him when their ships arrived. He feared the Swedes would crush Russian Orthodoxy, which he regarded as the soul of his nation. When the Swedes arrived, he marched a small force through treacherous marshes to the Neva River, where he told his men, “God is not on the side of force, but of the just cause, the truth.” Attacking out of a mist, before the Swedes were fully disembarked, he caught the Swedish general lolling in a golden chair. The Russian victory was complete and earned him the name “Nevsky” to refer to his victory on the Neva.

Nevsky went on to defeat a Lithuanian invasion and fought the powerful Teutonic Knights in a famous battle on ice. In the west he was successful, but threats from the east proved harder to deal with. Realizing Russia could not defeat the Golden Horde of Gengis Khan, he became the Khan’s vassal. But in a visit to the Khan, Nevsky boldly refused to worship pagan gods, knowing this could mean his death. Khan Batu admired his spirit and waived the obligatory ceremony. During a second meeting, the Khan increased Nevsky's domain.

Nevsky’s ambition caused him trouble with Novgorod, as did the heavy taxes he paid to the Tatars. After the Russians killed some tax collectors, Nevsky traveled with a few followers to negotiate on behalf of his people. He was rudely treated but achieved his goal. Exhausted by the ordeal, he headed home. At a monastery in Gorodetz he rested, his body no longer as strong as his spirit. He died on this day, 14 November 1263.

At his death, he was dressed in a monk's clothes. When Metropolitan Cyril learned of his demise, he said, “Brethren, know that the sun of the Russian Land has now set.” Nevsky was just forty-three but had become a legend in his short life. He was one of the greatest military geniuses Russia ever produced, and is still regarded by many Russians as a saint because he did so much to preserve the Orthodox church from the Catholics in the west and the Mongols in the east.