“We did not know where we were, on heaven or on earth.” Russian Ambassadors (987), in a report to Prince Vladimir of Kiev. 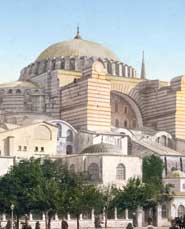 The Hagia Sophia is now in Muslim hands

We did not know where we were

Vladimir, Prince of Kiev, is a pagan playboy with a harem of eight hundred. He is cruel and powerful, subjugating much of the region known as Rus to himself. Ignoring the increase of Christianity among his subjects, he has erected many statues to his people’s ancient gods.

However, Prince Vladimir begins to recognize that pagan gods are unable to unify Rus. Becoming interested in the question of faith while planning a campaign against the Eastern Roman Empire, he has sent embassies to the neighboring states of Bulgaria, Khazar, and Byzantium to examine their beliefs. The ambassadors return, declaring that the Islam of Bulgaria is too unhappy a religion to adopt. The fact that Islam bans fermented drink and pork does not set well with the Russians, who cannot imagine life without either—especially the drink. Vladimir himself rejects the Judaism of his Khazar neighbors, for he says the Jewish loss of Jerusalem and its temple proves that God has forsaken them. As for German Catholicism, the ambassadors describe it as plain and dour. Their impression of the faith of their Orthodox neighbors to the south is altogether different, however. Upon attending a service at the glorious Hagia Sophia cathedral in Constantinople, they report:

“And we went into the Greek lands, and we were led into a place where they serve their God, and we did not know where we were, on heaven or on earth; and do not know how to tell about this. All we know is that God lives there with people and their service is better than in any other country. We cannot forget that beauty since each person, if he eats something sweet, will not take something bitter afterwards; so we cannot remain any more in paganism.”

Vladimir and his subjects are not complete strangers to Christianity. Vladimir’s grandmother, Olga, had embraced the western religion many years before. There are strategic reasons to embrace the faith, too. Of all Vladimir’s neighbors, Christian Byzantium is the most powerful. However, its power does not deter the prince from threatening war with Constantinople if Emperor Basil II will not give him his sister Anna in marriage. Basil replies that Christian women are only allowed to marry Christian men.

Vladimir agrees to be baptized and sends away his pagan wives. Anna is brought to him with several priests who instruct and baptize him.

The change in Vladimir is significant. He becomes kinder and is filled with zeal to depose the old gods and convert his subjects to his new faith. He hews down or burns the statues of pagan gods and drags the image of Perun, his people’s chief deity, through the mud. He requires all of his subjects to embrace Christianity, which they do in a mass baptism. Having rejected the old gods, he builds many churches for his new Lord. Russia becomes a leading Orthodox Christian nation.