It Happened on JANUARY 13

REMIGIUS SHONE AS THE BISHOP OF REIMS AND APOSTLE OF FRANCE 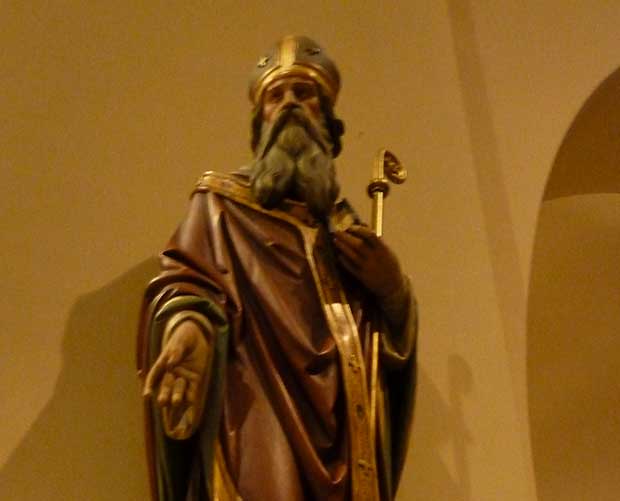 In one of the most famous incidents of his life, Remigius, first bishop of Reims, baptized King Clovis I on Christmas day, c. 496. Thousands of Clovis’s followers also accepted baptism.

Born around 437, Remigius is thought to have been the son of a count and the grandson (through his mother, Celina) of the bishop of Soissons. Well-educated, he withdrew to Laon to devote himself to both sacred and secular studies and to prayer. His good character was well-known. When Reims needed a bishop, its people thought of Remigius. They seized the twenty-two-year-old and made him their prelate in 459 although he was not yet even a priest.

He became a great preacher and a miracle worker who healed the sick and supposedly threw himself into a burning town to quench its flames. He is said to also have prayed over two empty vials which then miraculously filled with oil so that he could baptize a dying pagan. Evidence of the truest miracle, salvation of souls, abounded, for multitudes in France converted to Christianity and reformed their lives under his sermons and the example of his holiness.

During more than seventy years of service to the church, he evangelized much of France and planted many churches. For this he is known as “the apostle of the Franks.” His success in this endeavor increased after the conversion of Clovis. For many years the king’s Christian wife, Clotilde, had tried to convert her husband. Although Clovis was beneficent toward the church, he feared that his pagan followers would abandon him if he left the old gods. However, at a crucial moment in the battle of Tolbiac, when it seemed he would lose his kingdom, he cried out to Christ, and imminent loss turned to eminent victory. True to the promise he had made in the heat of battle, he sought baptism.

Clovis allotted lands to Remigius who became an archbishop, establishing churches. Among the cities to which he appointed bishops were Tournai, Cambrai, Terouanne, Arras, and Laon. The see of Reims became the site at which French kings would be crowned.

In 517 Remigius held a synod against the Arian heresy and converted an Arian bishop to orthodox views. He increased the church’s influence by readily accepting barbarians into its body.

Remigius died on this day, 13 January 533. Three centuries later, Hincmar, another famous archbishop of Reims would write a life of his predecessor, although not without embellishments to strengthen his own hand in the controversies of his day.

Both the eastern and western churches regard Remigius as a saint. However, his highly-praised sermons did not survive the ravages of time.