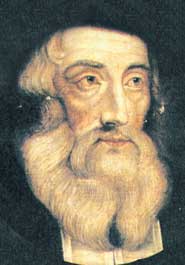 Ignorant of the Scripture

John Wycliffe is disgusted with the state of the church, both in his native England and in the entire western world. Fat-cat bishops grab multiple livings (paid church positions), while the poorer clergy and common people live on the verge of starvation. For example, William of Wykeham, born the same year as Wycliffe, has amassed huge riches and considerable power for himself by holding twelve livings at once. In so doing, he is only following the example of popes and cardinals. Wycliffe stands against this greed, demanding that the government strip the church of excessive property and restore it to the people. He also opposes the demands of popes for huge sums of money from England.

Greed is only one of the errors that disgusts Wycliffe. He contends that it is because the Scriptures are neglected that churchmen have little knowledge of God and fail to teach their people the true gospel, substituting a system of works, penance, altars, sacrifices, and confessions in its place—with many fees attached. The church has created an artificial divide between clergy and laity, in which the latter are forbidden to drink the communion cup and are taught they must go through a priest to obtain forgiveness of sin rather than go to Christ directly.

In contrast with the majority of clergymen, Wycliffe has studied the Bible long and hard, praying for insight. He declares that it teaches salvation by faith and the direct access of all believers to God. Because the Bible is God’s own word, he sees it as trumping any man-made system; it is the authoritative statement with which all human teaching must agree. He will declare, “Even though there were a hundred popes and though every mendicant monk were a cardinal, they would be entitled to confidence only in so far as they agreed with the Bible.”

Alarmed at Wycliffe’s attack on their power, privileges, wealth, corruption, and false doctrine, churchmen become his enemies and even bring him to trial. In answer, Wycliffe writes several tracts and books. In a span of just two busy years—1378&endash;1379—he authors books on the importance of the Bible, the true nature of the church, the office of the king, and the power of the pope. The western church divides between two popes in 1378, and Wycliffe speaks of them as antichrists and “two heads of the devil.” While the rival popes heap anathemas on each other and joust for power, he sets out to relieve Biblical ignorance in England by issuing the New Testament in English and contributing to the translation of the Old Testament. Until now, the complete Bible has not been available in English, or in most European languages. Gothic, Latin, and French are the only languages with complete or near-complete translations. In 1199 Pope Innocent III had banned unauthorized translations into vernacular languages because the Cathars and Waldensians had relied on translations of their own to defy Roman teachings. Ninety years before Wycliffe’s birth, councils at Toulouse and Tarragona had agreed with the pope in banning possession of unauthorized renderings of Scripture.

To awaken the church to the special place of Scripture, Wycliffe also writes a book On the Truth of the Holy Scripture. Following Jerome, he argues that since all Scripture points to Christ, “To be ignorant of the Scripture is the same thing as to be ignorant of Christ. In the Bible is the salvation of men contained.” Wycliffe’s town becomes a center for production of Scriptures in English. (Although banned and burned, over one hundred and fifty manuscript copies will survive into the twenty-first century). Despite persecution and cruel deaths, poor preachers called Lollards (the origin of their name is uncertain) carry copies of God’s Word throughout England.

Surprisingly, when English peasants revolt against their oppressive government in 1381, the uprising gains the least support where one would expect it to have the most—in those regions where Wycliffe’s influence is greatest. Presumably this is because of his personal opposition to armed rebellion, or it may be a tribute to the power of the softening influence of Scripture.

Owing to a royal marriage that connects Bohemia and England, Wycliffe’s teachings reach Prague where they will inspire the reforms of John Hus and his associates. Because Wycliffe hits the same notes which will become most significant in the Reformation a century and a half later, he will become known as “The Morning Star of the Reformation.”