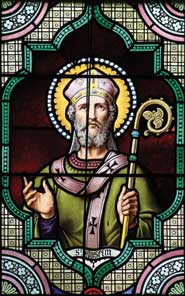 You exist so truly, Lord

As Prior of Bec, Anselm has raised the abbey’s prestige and made it a first-rate school, for he has a superb mind, perhaps the best in the eleventh-century Christian world. Many in future generations will consider him the founder of scholasticism, a method of learning which asks questions and attempts to resolve them through reasoning. At Bec, Anselm has written the first of his philosophical works, the Monologion.

Writing the Monologion, which consists of a lengthy string of propositions and arguments on the nature of God and creation, has led Anselm to wonder whether a single, compelling argument can be found which proves that God really exists.

He grapples with the possibility for a long time without success. He wonders if it is right to continue his search, for the effort is eating up study time, which might better be spent on questions that can actually be solved. He decides to abandon his quest.

It seems his mind has a will of its own, however. The more he tries to turn off the problem, the more it recurs to him. Suddenly, when he is quite worn out from considering failed solutions, he is filled with joy. The very argument he needs wells up within his mind. It turns on the phrase “that [being], than which nothing greater can be conceived.” Future philosophers will name it the “Ontological Argument” and of all arguments for God’s existence it is the subtlest, the most difficult to overthrow, racking the intelligence of the most eminent philosophers of subsequent centuries, such as Descartes, Locke, Leibniz, Hegel, and Kant.

Anselm publishes his argument in a new book, the Proslogion, for he believes “that what had given me such joy to discover would afford pleasure, if it were written down, to anyone who might read it ....”

At the beginning of his argument, Anselm makes a preliminary point. To be real, to be living, to have power is greater and more perfect than to be imaginary. To make his case, he uses the idea of a painting in an artist’s mind versus an actual painting; but a stronger analogy would be the difference between having an imagined friend to pull one out of quicksand as opposed to a real friend. The latter clearly would be more perfect in every way.

Having made this important distinction between the real and imagined, Anselm moves on to discuss the concept “God.” What do we mean when we use the word “God” ? he asks. He replies that we mean a perfect being, greater than any other who can be thought of.

Definition in hand, he sees two possibilities. Either the being exists, or it does not. If God does not exist, then the term “God” refers to an imaginary being. However, this makes the definition contradict itself, for to be real, to be living, to have power is greater than to be imaginary. A greater God can be thought of than an imaginary god—namely, a real, living God. Anselm finds that he cannot even discuss the word “God” as defined unless God really exists because he has to think of God as really existing in order for his idea to be consistent. In short, he perceives that no philosopher can legitimately argue that God does not exist if he or she defines God as “a perfect being greater than any other who can be imagined,” for if the definition is to have meaning at all, it requires that God have real existence.

This leads him to a burst of praise. “You exist so truly, Lord my God, that you cannot even be thought not to exist; and rightly. For, if a mind could conceive of a being better than you, the creature would rise above the Creator; and this is most absurd ....”

Anselm will go on to become Archbishop of Canterbury and will author several other books, including his famous Cur Deus homo? or Why Did God Become Man?