“God wills it!” Franks at Clermont (1095). Shouted in response to Pope Urban II. 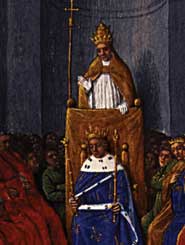 Preaching the First Crusade at Clermont by Jean Fouquet

Pilgrims visiting Jerusalem are being ill-treated by the Muslims who hold the Middle East. Meanwhile, the Greeks of Byzantium are under siege by Muslim Turks. Other Muslims have attacked Italy and Gaul, seeking to extend their empire. In short, Islam is a terrifying menace to Christianity all around the Mediterranean. The situation can no longer be ignored by Pope Urban II, who has called a council, which is meeting now in Clermont, France to address church reform and the situation in the east under the Muslims.

Earlier that year, a great meteor shower frightened the people of Europe. Bishop Gislebert of Lisieux declared this to be a sign that a crusade must be undertaken to regain the east. Other visionaries have arisen with similar talk. Byzantine emperor Alexius Comnenus has also appealed to the pope for help.

Now, on this cold November day, a great crowd of laymen and clergy have gathered in an open field to hear Pope Urban address this issue, and he does so masterfully. He reminds his largely Frankish audience of their many wars for pride and position. Such wars, he says, will damn them, but there is a war they can undertake for the glory of God—a war to recapture the sacred places of Jerusalem. He recounts a list of wrongs which must be remedied: Christian churches have been converted to mosques and stables; the streets where Jesus walked are trampled by heathen feet; Christians are persecuted and tortured; their women are raped. Kingdoms in the east which once were Christian have been crushed militarily and can no longer defend holy Christian places. Pilgrimages have become virtually impossible.

“To whom therefore has the labor of avenging these wrongs and of recovering the territory fallen, if not upon you?”

Asserting that the end of the world is near, he announces that the antichrist will soon appear. Will there be any Christians left in the Middle East to oppose this Satanic monster?

The Franks must put aside their squabbles, he says, and direct their energies to recapturing the East for the sake of Christendom. Drawing on Scripture, he warns that anyone who holds back for love of family is not worthy of Christ, whereas anyone who forsakes this world’s goods will inherit eternal life. As a further inducement to any who will undertake the hardships and dangers of this expedition, he promises remission of sins. Christian clergy have long claimed that they have power to absolve those who performed penance. The pope promises this absolution to any crusader who properly confesses his sins, an act which requires genuine contrition for sin and a resolution to turn from it.

“Advance boldly, as knights of Christ, and rush as quickly as you can to the defense of the Eastern Church. For she it is from whom the joys of your whole salvation have come forth, who poured into your mouths the milk of divine wisdom, who set before you the holy teachings of the gospel.”

Moved by the Pope’s rhetoric and promises, the crowd responds as if with one voice, “God wills it! God wills it!”

The pope seizes on their enthusiasm. “Yes,” he says, God has united them by their chant—and he orders them to use these words as a battle cry. He also instructs them to embroider the sign of the cross on their clothes, which many immediately do.

With the belief that God wills it, thousands of men, women, and children will soon be on the move. Poorly supplied and ill-equipped, most will die on the way; virtually all of those who make it alive to the east will be tossed on the lances of Muslim warriors. However, when the better-trained professional soldiers appear, they are more successful. Despite being desperately outnumbered, hungry, thirsty, weakened by disease, and undermined by the political maneuvers of their Byzantine allies, they make steady progress toward Jerusalem. Through a seemingly miraculous train of events, they overcome hardships, defeat their opponents, and wrest the Holy City from the control of the Muslims.