“The Christian glories in the death of the pagan, because Christ is glorified.” Bernard of Clairvaux (1090–1153), from <em>In Praise of the New Knighthood.</em> 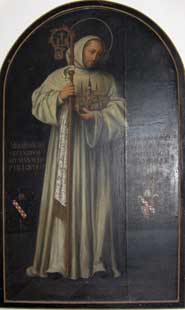 Bernard of Clairvaux by Wasshuber

The death of the pagan

More than thirty years have passed since the Christian capture of Jerusalem from the Muslims in 1099 during the First Crusade. The Crusades were a response to the rise of the aggressive Muslims of Turkmen who had vigorously persecuted Christians and barred their visits to the holy land. Following the success of the First Crusade, pilgrims flock to the mideast to behold the places where Christ walked. For many, their pious desire has spelled doom. The crusaders who hold Jerusalem are not powerful enough to control surrounding regions, and bandits and Muslims rob and massacre hundreds of pilgrims. Islam remains a menace to the West.

Bernard of Clairvaux, an influential mystic and monk, is aware of this. He also knows that a small band of impoverished knights has taken a vow to risk their lives to defend Jerusalem and its pilgrims. Baldwin, King of Jerusalem, has given them space in the captured Al Aqsa Mosque, which the crusaders believe is the remains of Solomon’s temple. Hence, they become known as Poor Knights of Christ and the Temple of Solomon, or, more simply, as Knights Templar.

Bernard has the ear of popes, kings, and common folk. A word from him has immense impact. He has defended the budding Templar order at the Council of Troyes in 1129 and convinced Pope Honorius II to legitimize it.

The knights are grateful. Their leader and co-founder, Hugh of Payens, requests Bernard to write them a few encouraging words. After a long delay, Bernard finally obliges around 1135. He says that he has not taken their request lightly but hesitated, fearing to botch the job and hoping that someone more qualified would undertake the task.

Templars are a new knighthood, he says. Many spiritual warriors have wrestled in prayer and fought against demons. Many knights have battled with steel to overpower physical foes, but in the Templars are found knights who powerfully gird themselves with both spiritual and secular weapons.

He assures them that if they die in battle for Christ, their deaths will be precious in the eyes of the Lord and glorious. Whereas knights who war for secular causes are in danger of damnation, those who die for Christ are safe from condemnation. Their work is not sinful:

“Neither does he bear the sword in vain, for he is God’s minister, for the punishment of evildoers and for the praise of the good. If he kills an evildoer, he is not a man killer, but, if I may so put it, a killer of evil. He is evidently the avenger of Christ towards evildoers and he is rightly considered a defender of Christians. Should he be killed himself, we know that he has not perished, but has come safely into port. When he inflicts death it is to Christ’s profit, and when he suffers death, it is for his own gain. The Christian glories in the death of the pagan, because Christ is glorified; while the death of the Christian gives occasion for the King to show his liberality in the rewarding of his knight....

“I do not mean to say that the pagans are to be slaughtered when there is any other way to prevent them from harassing and persecuting the faithful, but only that it now seems better to destroy them than that the rod of sinners be lifted over the lot of the just, and the righteous perhaps put forth their hands unto iniquity.”

Bernard’s letter leads to an immediate increase in the number of Knights Templar. The order will become a powerful force for two centuries, and acquire much wealth through protecting the goods of pilgrims and crusaders. Eventually their wealth and exemptions will breed envy and cause their downfall.

Long before this collapse, however, Bernard will preach the Second Crusade at the command of Pope Eugene III. In his sermons he will prophesy success. When the crusade fails dismally, his credibility will decline.

In all this, Bernard proves himself a true child of his times. On the one hand, he writes words of deep spiritual insight and hymns, such as “Jesus the Very Thought of Thee, with Sweetness Fills My Breast.” On the other, he advocates violence against those Christ died to save.