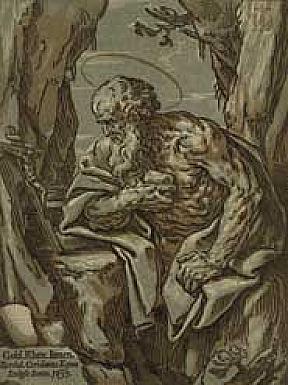 Always Have Some Work on Hand

In the fifth century, wherever Christianity is found, monasticism is one of its most significant expressions. Writing from his monk’s cell in Bethlehem, Jerome responds to the query of a young man from Toulouse. Rusticus is weighing whether to become a monk—or a hermit.

Because of Jerome’s fame as a scholar, many people write to him for advice, and a number of his replies will be preserved. In this instance, he says it is good to discipline oneself by living in a wild place on frugal rations. However, he thinks it better for Rusticus to join a society of monks rather than try to go it alone. A solitary hermit is exposed to greater temptations than one who puts himself under obligation to others. Alone, a man can become self-indulgent, sleeping and eating when he wishes, growing proud by comparing himself to others who are not as strict as himself. Jerome should know—he was once a hermit himself.

Having endorsed monasticism, Jerome advises Rusticus how best to make it profitable to his soul. His advice boils down to this: keep busy and you will stay out of trouble.

“Never take your hand or your eyes off your book; learn the psalms word for word, pray without ceasing, be always on the alert, and let no vain thoughts lay hold upon you. Direct both body and mind to the Lord, overcome wrath by patience, love the knowledge of Scripture, and you will no longer love the sins of the flesh. Do not let your mind become a prey to excitement, for if this effects a lodgment in your breast it will have dominion over you and will lead you into the great transgression. Always have some work on hand, that the devil may find you busy.”

Jerome reminds his correspondent that even the apostles worked. Therefore, Rusticus should follow their example and make creels or weave baskets. He encourages him to tend a garden and raise fruit trees, manage beehives, twist fish lines, and copy books. He cites the practice of Egyptian monasteries which “make it a rule to receive none who are not willing to work; for they regard labor as necessary not only for the support of the body, but also for the salvation of the soul.”

Drawing on his experience, Jerome tells Rusticus that he overcame his own youthful passions by losing himself in the study of Hebrew, a self-imposed task which seemed difficult at the time but has proven of great benefit to him. He alludes to his work of translating the original Hebrew and Greek texts of the Bible into Latin.

Characteristically, Jerome, who is known for his many quarrels, injects one into this letter. Advising Rusticus to speak evil of no one, he undermines his admonition with a vicious description of a former friend, the church historian Rufinus, whom he calls “the grunter.”

Jerome’s closing advice is that Rusticus heed the instruction of Proclus and Exuperius, worthy leaders of the Toulouse church. He notes especially Exuperius’s concern for the poor and avoidance of greed, in which he is like Christ. “If you have substance, sell it and give to the poor. If you have none, then are you free from a great burden. Destitute yourself, follow a destitute Christ. The task is a hard one, it is great and difficult; but the reward is also great.”