“Whosoever calls himself, or desires to be called, Universal Priest, is in his elation the precursor of antichrist.” Gregory the Great (<em>ca.</em> 540–604), in his official correspondence. 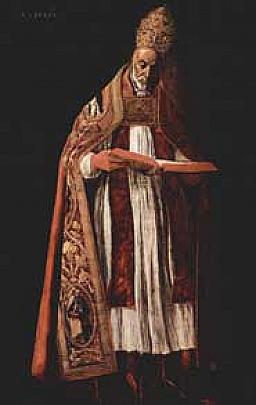 Pope Gregory is troubled. For at least four centuries, Roman bishops have claimed to be, at the very least, first among equals with the other bishops of the church. Almost one hundred and fifty years earlier in 443, Leo the First declared that the bishops of Rome were direct successors of Peter and, therefore, heirs to unique powers over heaven and hell. However, other church fathers have disputed Rome’s interpretation of Scripture, arguing that the entire body of bishops shares those same powers.

Now word has reached Gregory that at an eastern council held in 588, Bishop John “the Faster” of Constantinople, has accepted the title “Ecumenical Patriarch” from Emperor Maurice. Gregory reads the title as meaning “Universal Patriarch.” He reads it as a claim by John the Faster to be the only, or ultimate, bishop. Others have addressed the patriarch of Constantinople with this flattering title before, but this is the first time that a patriarch has begun affixing it to his own correspondence.

Perhaps Gregory does not know that there is also an “Ecumenical Librarian” in Constantinople, a title which essentially means “imperial librarian” and implies no authority over any other librarian. At any rate, he responds with a warning letter to Emperor Maurice.

The bishop of Rome assures the monarch that he has the unity of the church in mind. He says that despite the pain the title has caused him, he has accepted envoys from John in a spirit of love and humility. Nonetheless, he tells the emperor, he has written to John the Faster, appealing to him to refrain from using the “foolish title.” He points out that a frivolous thing can be extremely dangerous as, for example, when antichrist comes he will take the name of God, “an action at once frivolous and deadly dangerous.”

This thought leads him directly into his next assertion: “Now I confidently say that whosoever calls himself, or desires to be called, Universal Priest, is in his elation the precursor of antichrist, because he proudly puts himself above all others.”

Gregory warns that anyone who exalts himself will be humbled. If his actions are any indication, he really means this. Despite his belief that the bishop of Rome is leader of the entire church, Gregory styles himself “Servant of the Servants of God” and labors hard for the well-being of the church and the common people. He appeals to the emperor to deal with the offense. To accept such a title would in effect be to claim all priests are subject to one, and even the church of Rome makes no such assertion. (Indeed, a North African council of 217 bishops had forbidden Rome to take such a title.)

Emperor Maurice ignores Gregory’s request. Indeed, Gregory will die with the matter unresolved. Future popes will also be unable to resolve the issue and in the end will adopt the very title that Gregory asserted will make its wearer the precursor of antichrist. Ultimately medieval popes will exalt themselves far higher than John the Faster ever contemplated in his own innocent usage of the title.