“It is absolutely necessary for salvation that every human creature be subject to the Roman Pontiff.” Boniface VIII (<em>ca.</em> 1235–1303), in <em>Unam Sanctam.</em> 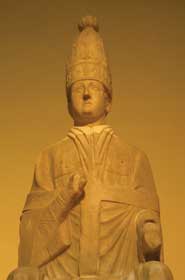 Subject to the Roman Pontiff

Boniface VIII becomes pope in 1294. He is not known for holiness, but he does understand the uses of power. Cardinal Llanduff writes of him, “He is all tongue and eyes, and the rest of him is all rotten.” Upon defeating the Colonna family of Italy in a crusade (not all crusades went east against the Muslims!), Boniface promises these rivals that if they will surrender the city of Palestrina, he will spare it. Instead he razes the city, destroys its historic buildings and artifacts, and salts the ground. He reduces Albert of Hapsburg to submission on terms favorable to the papacy. Scotland yields itself as a fief to him in return for protection from England (which England ignores). He continues his show of power with interdicts of Sicily and Florence, intending to shut down most church functions in both places until they meet demands he has made on them.

So hated is Boniface in Florence that even before he is dead, Dante (a Florentine) relegates him to endless torment in the eighth circle of hell, where he is to be planted on his head in a stone crevice, feet aflame, suffering among other popes who bought their holy office with money.

Philip IV of France doesn‘t get along with Boniface at all. He attempts to extract gold from France’s clergy to finance war with England. In 1296 Boniface responds with a bull (a formal letter with the pope’s seal on it). Clericis laicos forbids the clergy to contribute to the civil authorities.

Philip IV retaliates by outlawing the export of jewels and gold and forbidding French merchants to stay in Italy. This cuts off a huge source of papal revenue. Suffering financially, Boniface calls a jubilee, pretending this has been a custom of the church for centuries. He promises spiritual benefits to anyone who will visit the tombs of Peter and Paul in Rome. So many pilgrims show up that Boniface’s coffers are fully replenished.

Philip arrests one of the pope’s legates (i.e., a papal agent) for inciting an insurrection. The French justice system condemns and imprisons the man. This is a direct affront to papal claims, for the church insists on the right to try all its own clergymen. Boniface orders the clergy to suspend payments to the king, demands the release of his legate, and issues a bull, insisting the French king obey the “Vicar of Christ.” Philip burns the bull. He calls a States-General (the French parliament) in which nobles, clergy, and commoners are represented, and they back his action.

Boniface counters with a council of his own. Philip forbids French bishops to attend, although several do anyhow. Immediately after the close of the council, Boniface issues two new bulls in such a manner that it appears they proceed from the council, although there is no record they do. One of them, Unam sanctam (1302), will be perhaps the most controversial declaration issued by a medieval pope because it seems to deny salvation to Eastern Orthodox Christians or any other people not subservient to Rome.

For centuries, popes have been making increasingly grandiose claims for their office. Boniface accepts such claims and surrounds himself with theorists who push for even greater privileges. Boniface now carries papal assertions beyond anything seen before. In Unam Sanctam, the pope claims to be head over kings and emperors and to have a lock on salvation. The bull closes with this bald assertion, “Furthermore, we declare, we proclaim, we define that it is absolutely necessary for salvation that every human creature be subject to the Roman Pontiff.”

Philip counters by drawing up a formal indictment of Boniface as an adulterer, embezzler, infidel, murderer, sodomite, sorcerer, and tyrant, calling for a church council to remove him from office. He specifically repudiates the pope’s claim that submission to a pontiff is necessary for salvation, saying the church has never taught this before.

Boniface prepares to interdict France, but before he can do so, one of the surviving Colonnas, outfitted by Philip and thirsting for vengeance, bursts into Boniface’s palace at Anagni with two thousand mercenaries. He strikes the old man in the face, fastens him backward on a horse, and parades him through the streets for all to see. For three days the pope’s captors starve him until locals come to his rescue and return him to Rome where he soon dies.

Centuries later, when Boniface’s bull becomes an embarrassment to the Roman Church, some of its apologists will insist it has been misunderstood and that it does not really require everyone to submit to the pope for salvation. Noted historians such as Philip Schaff will reject this view as historically unsound.