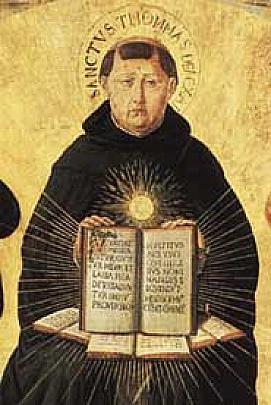 I can write no more

The heavy-set friar sits still, a faraway look in his eyes. Since his early youth, when he decided to become a Dominican and defend the faith, Thomas Aquinas has studied and written almost without respite.

During much of that time he has been engaged in intense personal, literary, and political battles. Twice family members, unhappy at his religious vocation, have snatched him from school. Once they held him a prisoner for two years. Fellow students have mocked him as a “Dumb Ox.” At the University of Paris, he was a figure of controversy, struggling to teach in spite of hostility and rejection. Through all this adversity he has never ceased to write—producing works of philosophical genius, books that champion faith, and poems on sacred topics.

Now he writes no longer. He has been this way since the feast of St. Nicholas of Myra (December 6) in 1273. His Dominican brethren find this curious. Thomas not writing? It is equivalent to Thomas not breathing. He is not yet fifty-years old, but he no longer takes up his pen. His latest book, a labor of many years, lies incomplete. Summa Theologiae, he named it: Summary of Theology.

Brother Reginald approaches him deferentially. He sees a worn face, tired eyes. It is true Brother Thomas Aquinas has worked himself hard for many months, rising early in the morning for devotions, teaching, dictating to his secretaries, and then praying into the wee hours of the morning. But always that regimen has included writing. Now Thomas does not write. “Master, will you not return to your writing?”

“I cannot.” Thomas does not explain why. How can he, who has never been one to say much to anyone about his interior life—how can he tell even this beloved brother in Christ his deepest spiritual secrets, his profound weariness with the world, his horror at the anti-Christian heresies he has lately had to refute?

Reginald presses him again. “Master, will you not return to your work?” Thomas Aquinas replies with an emphasis that ensures he will not be asked again: “I can write no more. All that I have written seems like straw.”

And on that enigmatic note, his life’s work ends; within months his great intellect will be stilled in death. What he saw or experienced or thought on that day in 1273 that brought him to this break of routine and renunciation of his vast undertaking will become guesswork for future generations. Even such facts as the future will learn of the incident will reach it through a fourth-hand account.