Christ’s People Have Power to Minister to Others 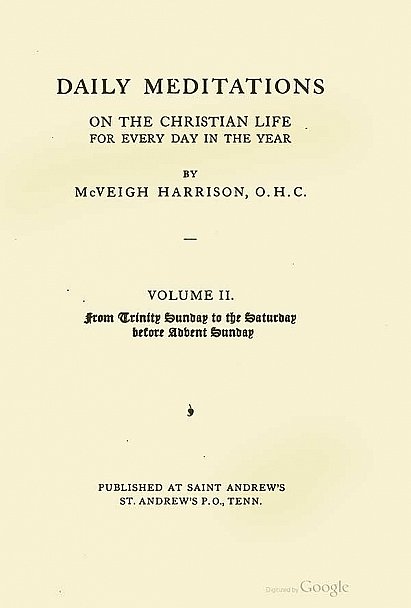 Title page of Daily Meditations on the Christian Life

And whenever the unclean spirits saw him, they fell down before him and cried out, “You are the Son of God.” And he strictly ordered them not to make him known. And he went up on the mountain and called to him those whom he desired, and they came to him. And he appointed twelve (whom he also named apostles) so that they might be with him and he might send them out to preach and have authority to cast out demons —Mark 3:11-15 (ESV).

Let us first consider the way in which Christ calls his disciples, and endues them with power to be his ministers. “He ordained,” or “made,” “twelve.” The Greek word used is the equivalent of that Hebrew one which in the Old Testament signified making a priest. The true ministers of Jesus are, therefore, in the fullest sense endowed and enabled by him. But not only are the clergy made to share in the powers of the great High Priest; in a different way, yet truly, the entire body of the faithful is admitted into his priesthood. “You have made them a kingdom and priests to our God”; thus the Church truly praises the Lamb of God (Revelation 5:10 Berean Literal). And therefore lay people, too, must first “be with him” in the spiritual life “that afterward he may send them forth to preach” him by their lives.

II. The response of the disciples to Jesus’ call is briefly but significantly described by St. Mark, when he says, “They came to him” ....For the evangelist’s thought is that all whom the Lord chose to call unto him parted finally with everything, broke every attachment, in order to give themselves up absolutely to the service of their homeless Master. Am I in any way trying to serve both God and mammon?

III. From the call of the first disciples I may learn the need of coming close to Christ before I try to help other souls. For the demons “threw themselves at his feet” and preached him exactly as he wanted the people to accept him. “You are the Son of God,” they cried: Yet “He strictly charged them that they should not make him known.” He would accept neither these preachers with unclean lips, nor the time to proclaim him, which they had chosen of their own self-will. And even though I bear to others the message of the Catholic faith, yet my time of heralding it will be inopportune and my words, however orthodox, will not be acceptable to my Master, unless I have received my direction and my consecration from him.

Fr. Jessie McVeigh Harrison (1878–1959) wrote popular Advent and Lenten devotionals on the Gospels of Luke and John as well as his Daily Meditations. He was a member of the Order of the Holy Cross. This is the meditation for Friday after the Fourth Sunday after Trinity.

McVeigh Harrison. Daily Meditations on the Christian Life for Every Day in the Year. Tenn, St. Andrews P.O., 1916.