Devotional Classic of MAY 26

Give Thanks for Holy Communion 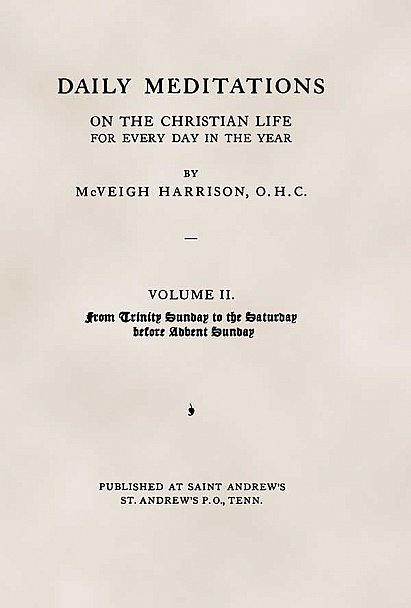 Title page of Daily Meditations On the Christian Life for Every Day in the Year.

I. Our Lord gave the instruction recorded in our passage in the one synagogue in all the world, it seems, which had over its door the bas-relief of a pot of manna rather than that of a seven-branched candle stick. Recently the remains of this synagogue have been exhumed, and found in remarkable preservation.… It is as though our Lord meant to preserve a monument of the sermon in which He first explicitly revealed His intention of giving us the manna of his blessed body under veils of bread and wine. And it is peculiarly appropriate that the mysterious food of angels which God rained upon His ancient Church in the wilderness should have been thus used as a type of the Sacrament of Love. “Manna” means “What is it?,” suggesting the mysterious nature of this Gift from our Savior to His Church in her pilgrimage.

II. Even the manna of the wildernesss had great power to preserve the children of Israel through all their long wanderings. Moses reminded them, at the end of the journey through the desert, that their clothing and shoes had not grown old upon them during forty years (Deuteronomy 29:5). But our Lord pointed out to the Jews that the Blessed Sacrament far transcends this miraculous virtue of the food given their forefathers. “Your fathers,” He said, “did eat manna in the wilderness and are dead. This is the Bread which cometh down from Heaven, that a man may eat thereof and not die.…Whoso eateth My Flesh, and drinketh My Blood, hath eternal life; and I will raise him up at the last day.”

III. The manna fell from the sky each morning until the seventh, but Christ comes to us daily in the Eucharist. The manna fell as the dew, and our Lord said of his Church “I will be as the dew unto” My people (Hosea 14:5). The bread in the wilderness had every delight and agreed to every taste, we are told, seeming to one as honey (Exodus 16:31), and to another like fresh oil (Numbers 11:8). So it is that every person of whatever temperament finds his perfect satisfaction in the Blessed Sacrament. The people of Gennesaret, with such various ills, received each one the healing, comfort and help which he needed, by touching Jesus, even if it were but the border of his garment (Mark 6:56).

Fr. Jessie McVeigh Harrison (1878–1959) wrote popular Advent and Lenten devotionals on the Gospels of Luke and John as well as his Daily Meditations. He was a member of the Order of the Holy Cross.

Harrison, Mcveigh. Daily Meditations On the Christian Life for Every Day in the Year. Tennessee: St. Andrew’s P.O., 1916