Don’t sleep in face of eternity 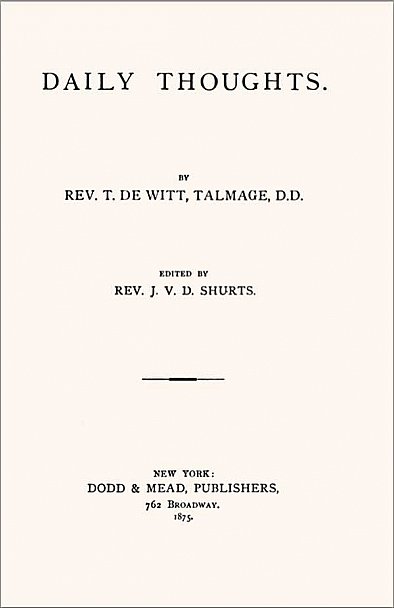 But Jonah had gone below deck, where he lay down and fell into a deep sleep—Jonah 1:5 (NIV).

Learn how soundly men will sleep in the midst of danger. The worst sinner on shipboard, considering the light he had, was Jonah. He was a member of the chosen people, while they were heathen. The sailors were engaged in their lawful calling, following the sea. The merchants on board, I suppose, were going down to Tarshish to barter; but Jonah, notwithstanding his profession of faith, was flying from duty. He was sound asleep in the cabin. He has been motionless for hours—his arms and feet in the same posture as when he lay down—his breast heaving with deep respiration. Oh! how could the sinner sleep? What if the ship struck a rock! What if it sprang a leak! What if the clumsy oriental craft should capsize! What would become of Jonah?

So men sleep soundly now amid perils infinite. In almost every place, I suppose, the Mediterranean might be sounded, but no line is long enough to fathom the profound abyss beneath every impenitent man. Plunging a thousand fathoms down, you cannot touch bottom. Eternity beneath him, before him, around him! Rocks close by, and whirlpools, and hot-breathed levanters [easterly Mediterranean winds]; yet sound asleep! We try to wake him up, but fail. The great surges of warning break over the hurricane-deck—the gong of warning sounds through the cabin—the bell in the wheel-houserings. “Awake!” cry a hundred voices; yet sound asleep in the cabin.

Rev. Thomas De Witt Talmage (1832–1902) was a famous 19th-century preacher, clergyman, author, and editor in both the Reformed and Presbyterian churches.