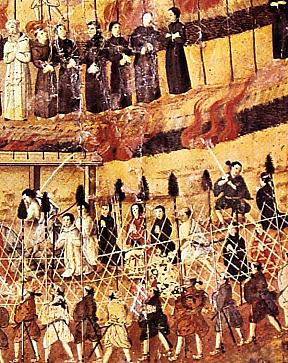 Detail from a painting depicting the Nagasaki martyrs.

On this day, 10 September 1622 Japanese officials executed a number of Christians, some by beheading and others by burning (one of several Japanese martyrdoms). The prisoners carried crosses and sang hymns praising God and condemning Japanese gods. Christian onlookers wept at the fate about to befall their teachers. The Japanese first beheaded thirty men and women from Nagasaki, as well as twelve of their children (all of them under ten years of age). A Jesuit father, Carlos Espinola (who would be the first of the priests to be burned alive) asked one of the mothers, Isabel Fernandez, where her son was. Her reply is indicative of the martyrs’ attitudes:

“Father, here is my son. I will offer him to God; he will become a martyr with me.”