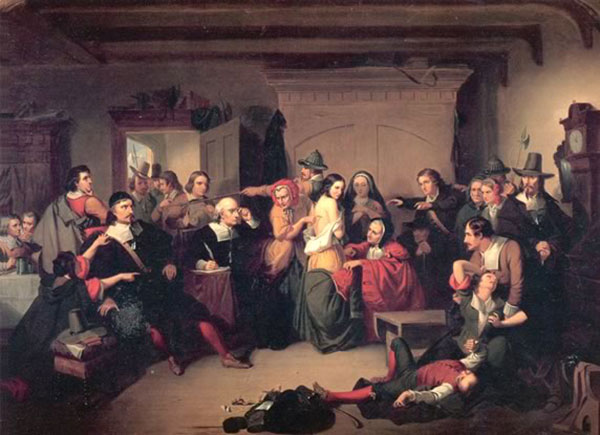 Examination of a Witch (1853) by T. H. Matteson, inspired by the Salem trials.

Mary Bradbury was an upright woman from Salisbury, Massachusetts, at the time of the Salem witch trials. In her own deposition, she declared herself a servant of Jesus Christ who had given herself to him as her only Lord and Savior. The Rev. James Allin, who knew her well, took an oath in her behalf, as did one hundred and nineteen neighbors. Her husband also signed a statement in her behalf on this day, 28 July, 1692. Despite this she was condemned to death for witchcraft, principally on the testimony of a family who harbored an old grudge. However, she escaped from jail and so escaped hanging.

“Concerning my beloved wife, Mary Bradbury, this is what I have to say: We have been married fifty-five years, and she hath been a loving and faithful wife to me. Unto this day, she hath been wonderful laborious, diligent, and industrious, in her place and employment, about the bringing-up of our family (which have been eleven children of our own, and four grandchildren). She was both prudent and provident, of a cheerful spirit, liberal and charitable. She being now very aged and weak, and grieved under her affliction, may not be able to speak much for herself, not being so free of speech as some others may be. I hope her life and conversation have been such amongst her neighbors as gives a better and more real testimony of her than can be expressed by words.

Upham, Charles. Salem Witchcraft, Volumes I and II: With an Account of Salem Village and a History of Opinions on Witchcraft and Kindred Subjects. 1867.