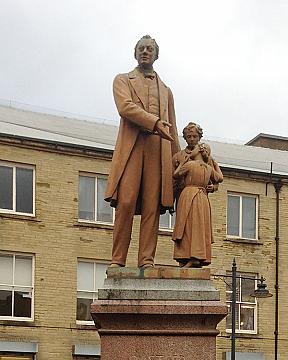 Richard Oastler of Leeds was the son of Wesleyan Methodists. He was educated in a Moravian boarding school. After several failures with his early plans, he became an estate manager. A mill owner named John Wood approached him and said that from reading the Bible he had come under conviction regarding his use of child labor. According to Oastler that was the pivot point of his life, for Wood turned to him and said “I cannot allow you to leave me without a pledge that you will use all your influence in trying to remove from our factory system the cruelties which are practised in our mills.” Oastler promised he would do what he could. “I felt that we were each of us in the presence of the Highest and I knew that that vow was recorded in Heaven.”

In 1830, his famous letter on “Yorkshire Slavery” was published in the Leeds Mercury. It helped inspire child labor laws. It compared the treatment of child laborers in Yorkshire mills to the enslavement of Africans—and argued that African slaves had it better.

On this day, 17 July, 1834, the Bradford Observer published another letter by Richard Oastler. It contained the following indictment:

“The mill-owners obtained their wealth by overworking and by defrauding the factory children. They were praying people, but took care their work people should neither have time nor strength to pray. These hypocrites pretended it was necessary to keep these poor infant slaves at this excruciating labour just to preserve them from ‘bad company’ and to prevent them learning ‘bad habits’.”