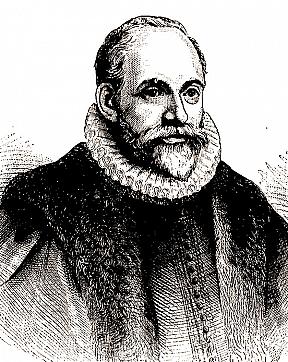 Jacob Arminius gave his doctoral speech on the Christology of the atonement.

Jacob Arminius studied under leading Calvinists and became minister of the Reformed Church in Amsterdam. In 1603, he was invited to teach at Leyden after the deaths of two faculty members. The university granted him a doctor of divinity on this day 11 July, 1603, at which time Arminius delivered a lengthy speech on “The Priesthood of Christ.” Arminius’ teaching, based on Scripture, tended to soften Calvinism and embroiled him in controversies that distressed him so much they led to his early death. A theological system known as Arminianism developed from his interpretations of Scripture.

“It was not possible for an angel to become a priest; because ‘he was to be taken from among men and to be ordained from men in things pertaining to God.’ (Hebrews 5:1.)

Neither could an angel be a sacrifice; because it was not just that the death of an angel should be an expiation for a crime which a man had perpetrated….Application was then to be made to men themselves. But, among them, not one could be found….For all men were sinners; all were terrified with a consciousness of their delinquency; and all were detained captive under the tyranny of sin and Satan. It was not lawful for a sinner to approach to God, who is pure Light, for the purpose of offering sacrifice; because, being affrighted by his own internal perception of his crime, he could not support a sight of the countenance of an incensed God, before whom it was still necessary that he should appear….

“In this state of affairs, the assistance of Wisdom was again required in the Divine Council. She declared that a man must be born from among men, who might have a nature in common with the rest of his brethren, that, being in all things tempted as they were, he might be able to sympathize with others in their sufferings; and yet, that he should neither be reckoned in the order of the rest, nor should be made man according to the law of the primitive creation and benediction; that he should not be under dominion of sin; that he should be one in whom Satan could find nothing worthy of condemnation, who should not be tormented by a consciousness of sin, and who should not even know sin, that is, one who should be ‘born in the likeness of sinful flesh, and yet without sin.’ (Hebrews 7:26.)